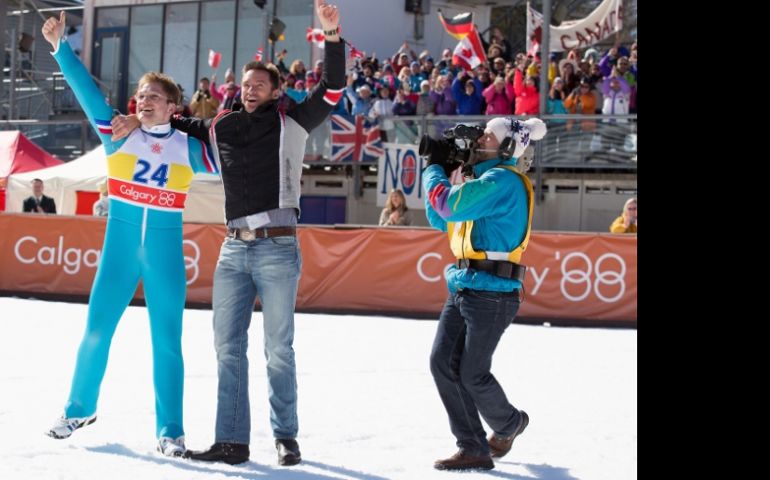 While most people know the story of the Jamaican bobsled team through the film "Cool Runnings" (1993), anyone who watched the 1988 Winter Olympics will remember the story of an even more unlikely Olympian, Eddie "the Eagle" Edwards, the one and one and only member of the British ski jumping team. His herculean efforts to train and qualify for and compete in the 1988 Winter Olympics are now told in a movie filled with heart, humor and charm.

Eddie (Taron Egerton) was born with knee problems that required hospitalization for a year as a child. He was never considered to be a gifted athlete, but he certainly had the heart of the greatest among us -- and aspired to be an Olympian from a very early age. When he failed to make the British Olympic ski team in 1984 he turned his attention and determination to ski jumping. The last time ski jumpers from Britain participated in the Olympics was in 1924, and one of them set the British record at about 40 meters.

Eddie's determination grates at his father, Terry (Keith Allen), who is a plasterer. His mother Janette (Jo Harley) believes in Eddie. She is the mediator between him and his father and she finances his training.

Eddie travels to Garmisch, Germany, to train. He has never jumped before, and he has one year to qualify. He finds a place to stay in the basement of a café near the jumping area, and even though the proprietor hits on him, she turns out to be a kind supporter. Eddie knows there is a special person who tends the snow, Bronson Peary (Hugh Jackman), who could coach him. Peary had been an extremely talented member of the U.S. ski jumping team but left because he lacked discipline and disappointed his coach, Warren Sharp (Christopher Walken). Now all he does is work and drink.

When Peary realizes how determined Eddie is and the risks he will take to try to make the team, he agrees to coach the young man. They disagree often, but Eddie's optimism and determination is irrepressible.

Suddenly it is time to apply for the team. The British Olympic committee tells Eddie they have decided, for safety reasons, that no one can compete in ski jumping unless they can jump 61 meters. It's completely arbitrary and Eddie knows they want to stop him from competing because they think it will bring ridicule upon the team. But it only takes one meet to qualify, and by a miracle, Eddie makes it.

"Eddie the Eagle" could be waved off as "just another sports movie," but I must say this one is special. Eddie is so naive, innocent and determined that you are in his court from the beginning. Then when he starts jumping with no experience, the audience at the screening I attended groaned in caution and then cheered as if we were there live. There are 13 jumps in the film, and each one pulls you in and all you care about is Eddie. Ski jumper Matti Nykänen (Edvin Andre) from Finland, who would go on to win three gold medals at the 1988 Winter Olympics, is very rude to Eddie at first and the Norwegian team are just as bad. Even worse is the British team when Eddie finally gets to Calgary.

British director Dexter Fletcher and Taron Egerton both said that from the beginning their goal was to bring warmth and affection to Eddie's story. The script had been around for 15 years before it landed on Fletcher's desk. The details are an adaptation of Eddie's life but the core of the film is true. The Hugh Jackman and Christopher Walken characters are fictitious, and Eddie actually trained at Lake Placid rather than in Germany.

Egerton sat beside Eddie Edwards at an early screening and admits he was very nervous to see how Eddie would react. When the lights went up, Egerton said, "He was crying because he loved the movie. He responded to it in the way we hoped he would."

Egerton, whose looks and manners in the film mirrors the real Eddie of the 1980s very well, had likewise never skied before making this film and he fell over a lot. He said of co-star Jackman, "Hugh is a sickeningly good skier and so absolutely good at everything he does." Egerton also said that we live in a celebrity culture where everyone wants to be the best "… and when someone comes along who isn't the best but has determination and passion, people connect with that."

"Eddie the Eagle" is for every person who always tried even if he or she didn't succeed or wasn't perfect or the best. It's for people with physical disabilities or who were bullied and kept on going. It's not that Eddie is not aware of what people think of him; he just doesn't care even when he starts flapping his arms after landing a jump to the jeers of the crowd.

"Eddie the Eagle" is infectious. It's a feel good movie even if it isn't perfect -- unless you want to just sit back, enjoy the show and be uplifted. I dare you not to smile when you leave the theater.

The Olympics should cultivate interdependence, not nationalistic pride