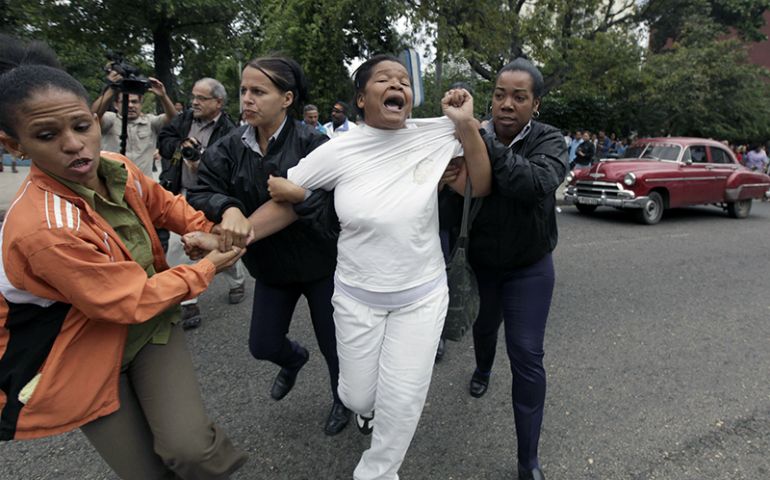 Cuban security personnel detain a member of the Ladies in White group during a protest on International Human Rights Day, in Havana, Cuba, on Dec. 10, 2014. (Reuters/Enrique De La Osa)

Pwint Phyu Latt is a Muslim peace activist in Burma who sought to promote interfaith relations with Buddhists, the nation’s religious majority. She was sentenced this year to two years in prison and two more years of hard labor.

Gulmira Imin is a Uighur Muslim in China who led the 2009 Uighur protests against its communist government. She has been in prison ever since.

Maryam Naghash Zargaran is a Christian in Iran who converted from Islam and worked with pastor Saeed Abedini prior to his incarceration and release. She was released briefly and returned to prison this year after serving three years of a four-year sentence.

Mahvash Sabet, a school principal, and Fariba Kamalabadi, a developmental psychologist, are Baha’is in Iran. Arrested in 2008, they and five other leaders known as the Baha’i Seven were given 20-year sentences based on false charges such as espionage.

Mehrinisso Hamdamova was a teacher of Islam to women in Uzbekistan. She was sentenced in 2010 to a seven-year prison term in a labor camp for the “crime” of private teaching about religion and reportedly suffers from cancer.

As members of the U.S. Commission on International Religious Freedom, we stand in solidarity with these and other religious prisoners of conscience.

We reaffirm our stand Saturday, Dec. 10 — Human Rights Day — as we commemorate the U.N. General Assembly’s adoption of the Universal Declaration of Human Rights.

We stand for the inalienable human right, affirmed in Article 18 of the declaration, of these prisoners, and indeed all people, to freedom of conscience and religion. And we invite others in the human rights community to stand with us, join with us and call for their release.

In highlighting these six prisoners today, our aim is twofold. We want to spotlight their plight and their countries’ appalling religious freedom abuses. And by focusing on these women, we seek to provide real-life examples of how in many parts of the world, the lack of religious freedom disempowers women.

Clearly, all of their countries are serious religious freedom violators.

In Burma, Buddhist state and nonstate actors target ethnic and religious minorities, from Rohingya and other Muslims to Christians.

China’s regime has cracked down on Uighur Muslims observing Ramadan, torn down churches and crosses, targeted the Falun Gong, repressed Tibetan Buddhists and jailed, tortured and harvested organs from prisoners.

Iran’s government has detained, tortured and even executed opponents of its interpretation of Shiite Islam and has targeted religious minorities, from Baha’is to Christians to Sunni Muslims.

And Uzbekistan severely restricts all independent religious activity and imprisons many thousands of individuals it claims to be religious extremists.

USCIRF has recommended and the U.S. State Department has designated all of these nations as “countries of particular concern,” marking them as among the world’s worst religious freedom violators.

It is no secret that these nations reserve their worst abuses not just for the religious groups they harass, but for individuals who either lead these groups or who boldly and publicly live out their teachings as their conscience dictates.

These women were acting on their convictions and pursuing their aspirations as human beings. Once authorities intervened, denying them their full exercise of freedom of conscience and religion, that process was abruptly halted.

Human rights supporters, particularly advocates for the rights of women, can advance their cause when they join with supporters of religious liberty. Indeed, religious freedom, rightly understood, affirms women precisely by affirming their right to choose what to believe and how to live. To protect religious freedom is allow women to pursue a path toward fulfilling their deepest potential.

As we mark Human Rights Day, we call on supporters of freedom of religion or belief and advocates for the empowerment of women to recognize the ties that bind us. Let us call for the release of these six female prisoners of conscience and others, and for governments to honor religious freedom and the full panoply of related human rights for the benefit of their people.

US bishops stand down while Biden stands up