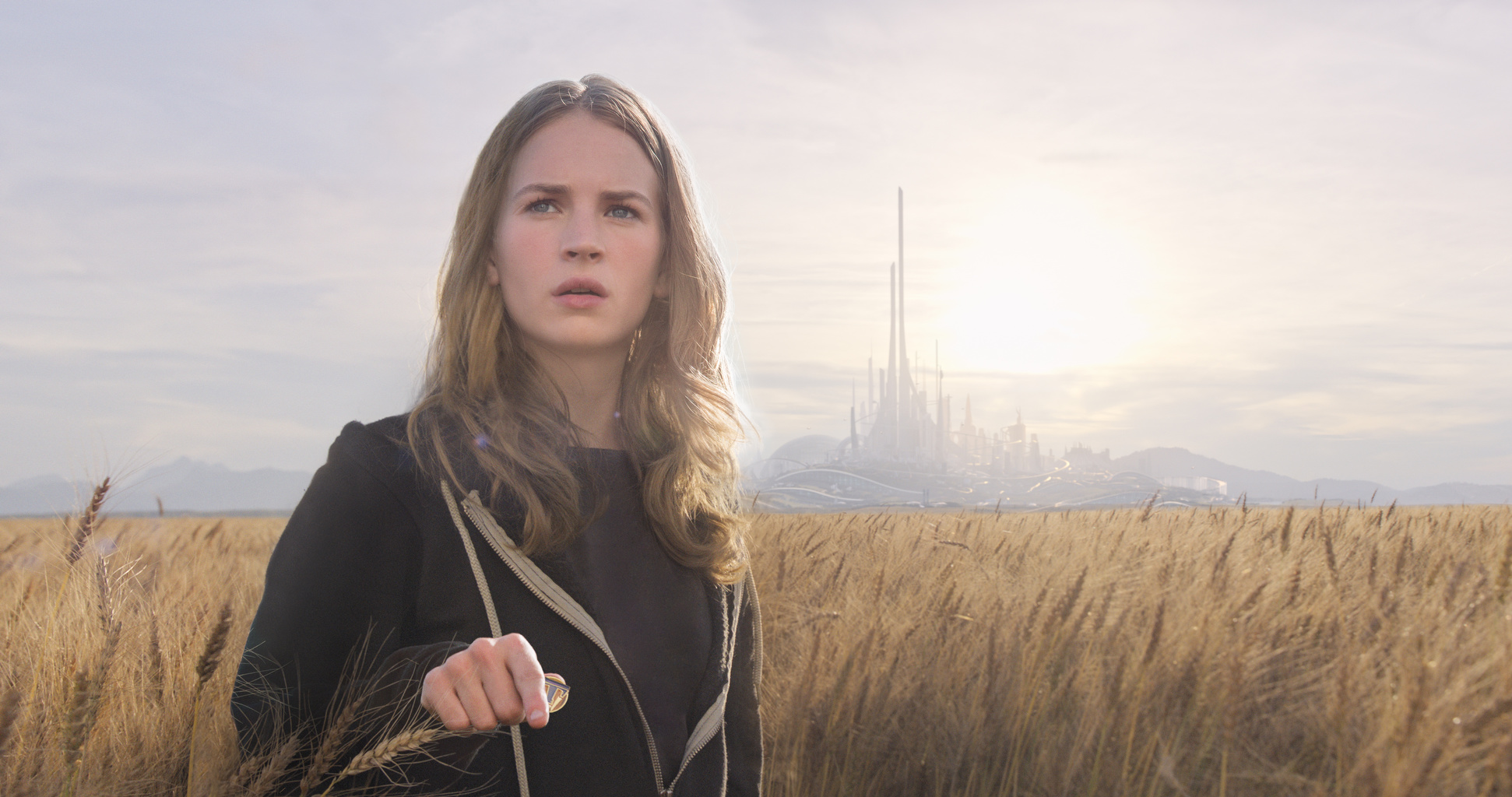 Britt Robertson stars in a scene from the movie "Tomorrowland." (CNS/Disney)

This summer’s “Tomorrowland” from Disney and director Brad Bird and “Mad Max: Fury Road,” a “reboot” of the original Mad Max trilogy from the 1970s and ’80s from Australian director George Miller, go together better than you might think at first glance. Seeing them in tandem makes all the difference.

“Mad Max: Fury Road” is the typical post-apocalyptic dystopian flick with themes of hope and redemption and regeneration. The lead characters are courageous, violent fighters and hope is a mirage. In “Tomorrowland,” the apocalypse is pending. There is still time to change, to do something. The main characters have optimistic energy, vision, and willpower. The only violence I recall is a bunch of human-looking robots are destroyed in a shop fight.

“Tomorrowland” stops the forward — and backward — thrust of the “Mad Max” gaggle of mashed up reconstituted vehicles dead in their desert tracks and seems to ask, in a total un-Disney way, “Aren’t you tired of all these mayhem and scorched earth survivalist movies? Do you really think these cataclysmic events are inevitable? What about doing something to prevent these portent events in the first place? How and who would do it? The politicians? Corporations? Think again.”

“Mad Max: Fury Road” features Charlize Theron as Imperator Furiosa (Latin for “furious commander”), a woman seeking redemption, though from what we will have to wait for the sequel to learn. She seems to be following the leader of a huge group of nuclear holocaust survivalists, Immortan Joe (Hugh Keays-Byrne), but in their trek across a barren landscape, she strikes her own course toward the Green Place where she was born.

Hidden inside Furiosa’s tanker are several women, kind of like “sister wives” to the scarred leader, Joe. They are breeders for his “family.” A true despot, Joe realizes something is amiss and the caravan goes after her. He controls everything at his headquarters, The Citadel, especially water, to keep the sick, poor, and damaged survivors at bay. Joe’s survivalists have captured Max Rockatansky (Tom Hardy) as a source of blood for Nux (Nicholas Hoult). Max and Nux are bound so he can keep the supply of blood going and they take off in pursuit of Furiosa’s rig, too. To make a long story shorter, both Max and Nux join the women with Joe and his minions in hot pursuit.

After making it through a narrow canyon passage, arranged ahead of time by Furiosa, they encounter a group of older women, a remnant, protecting the desert of what used to be the Green Place.  They decide to return together to Joe’s Citadel because it has water. The oldest woman carries a bag with seeds in it; one has taken root and a flash of green leaves is pushing through. Off the survivors go, promising a sequel as the credits start to roll.

Nothing about this story is tame. It is filled with relentless non-stop action, violence with a hint of humor. The mutant blind rock singer-flame thrower Doof Warrior (iOTA), who is strapped to one of Joe’s lead vehicles with bungee cords, looks like a leftover member of the Motley Crue. It is so incongruous that all you can do is laugh. There is mention of hope and redemption and life-giving water here and there.

A priest friend wrote on Facebook that “Mad Max: Fury Road” is “socially corrosive” from beginning to end. Actually I think this is what the movie is about: the consequences of uncaring, socially corrosive behavior will lead to worldwide disaster. The question is: what do you do about it? How do you restore the environment, order, and life itself? It will take a spectacular cinematic dystopian revolution — at least this is where “Mad Max” leaves us as a sequel (or sequels) is surely coming — but so what?

We’ve seen it all before just packaged differently. Children are made to kill children in “The Hunger Games”; the “Divergent” franchise, to me, is basically the same story. We can perhaps look to “The Giver” and “Fahrenheit 451” as the source of the post-apocalyptic genre in fiction and movies like “The Omega Man” in 1971. Hollywood keeps pumping out these movies, many based on popular novels, for new generations to flock to theaters to see, only to leave and wait for the next one. (Television’s fascination with the vampire sub-genre tells the same story: the end is near and life after is going to be hell.) Yes, there are those spiritual and religious themes that we console ourselves with. But then what?

Although largely panned by critics, ideologically I found “Tomorrowland” to be a breath of fresh air amid the dystopian dust created by peat-and-repeat movies. Both films are fantastical imaginings of future cataclysms to come, one dark and the other much lighter, but “Tomorrowland” risks being different from all the other films in the genre because it appoints, practically anoints, those who can change the course of history.

Go backward to 1964. Young Frank Walker (Thomas Robinson) makes his way through the crowds at the New York World’s Fair to the inventor’s pavilion. He is carrying his invention, a jetpack made from a vacuum cleaner, to enter a contest. Will his invention help make the world a better place? But the man in charge, Nix (Hugh Laurie), dismisses it because it is just for fun with no real purpose, though he knows Frank is a very smart kid. Instead, he introduces Frank to Athena (Raffey Cassidy) who seems to be Nix’s daughter (a Disney version of Nux in “Mad Max”?) Frank is smitten and Athena takes him on a tour of a place that exists in another dimension: Tomorrowland (drawn from Disney theme park’s Tomorrowland, of course.)

Fast forward into the future, but not too far, and we meet Casey Newton (played by Britt Robertson; note the connection to the name Newton) who is very bright and dismayed at the bad news all around her. The earth is a scary place. It is decaying and the government is shutting down NASA, where her father Eddie (Tim McGraw) is an engineer. Britt seeks out Frank (George Clooney), now a recluse, and when Athena appears again, they fight off some robots and try to save both Tomorrowland and the earth.

“Tomorrowland” makes a strong statement about setting aside politics and big profit corporations because of their failure to care for the earth, indeed their record of over-consuming and destroying resources and wants to encourage us to use our imaginations to solve the world’s problems — to let loose the creative energy of artists and scientists to change the inevitable doom that pop culture continually regurgitates for us. The evening news, local or national, report on environmental stories often, if we are paying attention enough to notice and ask questions. Or if we can connect the dots from art and current events that Pope Francis lays out for us in his encyclical, “Laudato Si’, on Care for Our Common Home” perhaps we can join the dreamers, artists, scientists and people of good will to make the changes needed to nurture and preserve the earth for everyone’s benefit, not just the rich and powerful.

So why are we compelled to watch disaster as entertainment but as some do, refuse to acknowledge the human element to climate change and the consequences of scorched earth human activity unfolding in front of us? “Mad Max: Fury Road” and films like it, are actually prophetic. “Tomorrowland” takes the bold step of telling us directly what we can do because as loud and explosive as these other films are, we don’t seem able to see, hear, or understand. Maybe this is why Hollywood keeps making them.

Regardless, are we not entertained, as Maximus (Russell Crowe) yells to the crowd in Ridley Scott’s 2000 “Gladiator”?  As far as the American film industry and the world audience go, isn't this all that really matters? For mindful viewers and creative people of good will, I hope not.