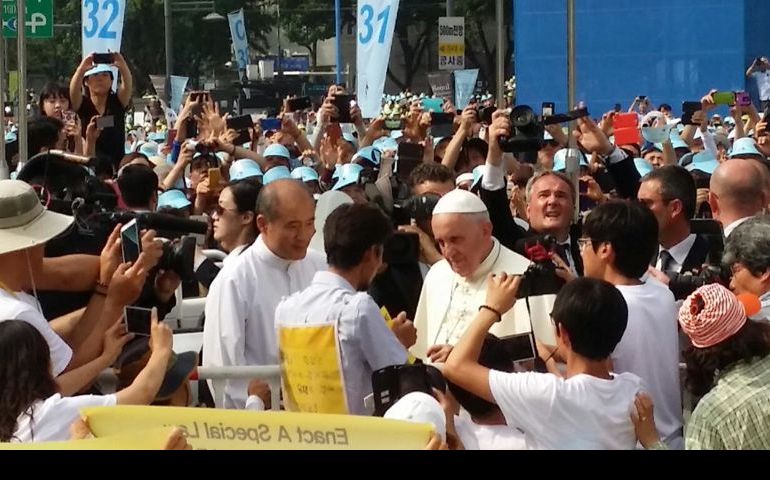 Kim Young-oh, the Hyundai plant assembly line worker whose bony shoulders seem to carry the hopes and pain of a nation,  got a wish filled today. This "soul of the nation" greeted Pope Francis to engage his support for a law to investigate and prosecute those culpable in the ferryboat sinking that took his daughter's life.

The 47-year-old Kim said goodbye to his 17-year-old daughter the morning of April 16 and never saw her again. She was one of the 306 who perished as the overcrowded ship sailed to Jeju island. Many of those on board were high school students headed for a school sponsored, getaway weekend.

Now in the 34th day of a hunger fast, the weakened father has been living under a white tent on Gwanghwamun Plaza where earlier today Francis beatified 124 Korean martyrs in a ceremony that drew somewhere around one million.

For days, Kim has been pleading to meet the pope and ask for his support. He told NCR four days ago he believed Francis is a caring person who supports the vulnerable, adding that the families of those who perished in the Sewol ferry, and who have been calling for answers, are the most needy and marginalized in Korean society today.

Kim said he his not pressing for an investigation for the sake of his own daughter, Yoo-min Kim. “She’s aldready dead.” Instead, he said, he is fasting and wants official legislation for an independent investigation and prosecution of anyone culpable so that future fathers will not have to go through what he is now enduring.

Newspaper reports indicate the ferry was overcrowded and carrying too much cargo. Its crew jumped quickly into lifeboats that came to the scene, leaving most passengers inside the ship as it sank.

For the past month Kim and supporters, including many Catholic priests and sisters, were camping on the plaza with him in makeshift tents. By an agreement with government authorities, the family supporters, whose numbers have been in the hundreds, agreed to leave the area to make room for ceremony attendees. The authorities told Kim he could remain in his tent.

Just after nine o’clock this morning Pope Francis’ popemobile began its journey down a mile-long downtown artery packed with cheering Koreans. At the foot of the plaza Kim stood behind a security barrier waiting for Pope Francis.

He was with scores of other ferry disaster relatives. To make certain the pontiff would see Kim they all sat down, leaving Kim standing alone.

The pope mobile approached, then stopped 20 feet from Kim.  After several seconds Francis stepped down from the pope mobile and walked toward Kim, stopping in front of him.

Kim reached over the barricade and the two men gripped each other’s hands. Kim bowed twice. For a second Francis looked confused. He could not hug Kim as a barrier stood between them and Kim was bending down.

Speaking through an interpreter who was standing next to the pope, Kim thanked him for stopping and asked him to support the families and support the legislation they wanted, according to an attorney representing the ferryboat families. He then asked Francis not to forget them. Kim handed Francis a personal letter. It was an appeal, said attorney, Pill Kyu Hwang. Francis took the letter and stuck it inside his white cassock.

The entire greeting lasted less than one minute. But it mattered greatly to Kim, attorney Hwang said, adding that Kim told him afterwards he feels Francis truly wants to support the vulnerable and needed. This, he said, gave him much satisfaction.

[Tom Fox is NCR publisher and can be reached at tfox@ncronline.org.]

Abortion as a familial, cultural, religious and entertainment issue