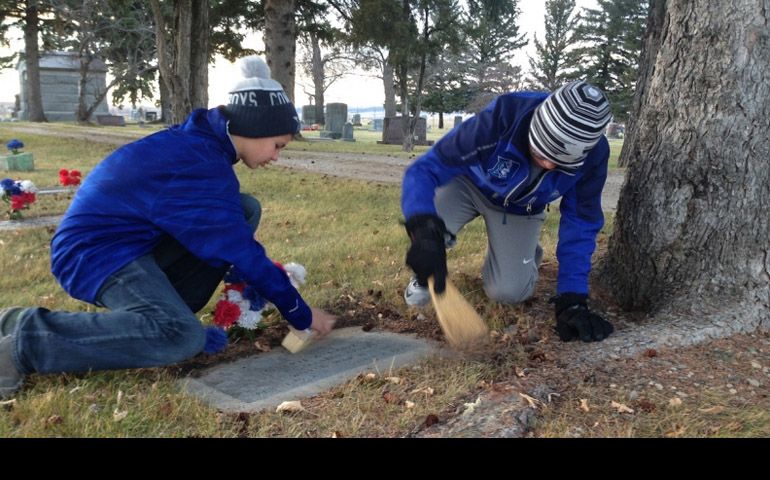 Ryan Fenley (left) and Trace Martin clean the headstone of a veteran's grave at Mount Calvary Cemetery in Lewistown, Montana. The pair are members of St. Leo Parish junior high youth group. (Photo courtesy of The Harvest)
This article appears in the The Field Hospital feature series. View the full series.

Not only did members of Lewistown, Montana's St. Leo Parish youth group pray for military veterans, they searched the town's Mount Calvary Cemetery for veterans' graves, even cleaning some of the headstones. The junior high parishioners also recorded the veterans' names and prayed as a group for them back at the parish center.

Inspired by Pope Francis' encyclical on the environment, Laudato Si', St. James parishioners also recently launched a program to educate parishioners about practical actions they can take in respect of the planet and its inhabitants.

San Francisco's Most Holy Redeemer Parish has become one of five weekly host locations for a very long blue bus, part of a fleet of donated, decommissioned City buses that have been retrofitted into roving shower and toilet facilities for the homeless. The parish and others have partnered with Lava Mae (roughly translated "wash me"), a non-profit aware of the dearth of hygiene facilities available to San Francisco's estimated 6,500-plus homeless, half of whom sleep on the street.

Parishes all over North America -- and probably the world -- have found that one sure-fire fund-raising auction item is a home-cooked meal by the pastor, associate or even a seminarian. In an interview with Catholic Action, newspaper of the Bismarck Diocese, local clerics who have had their culinary skills put on the auction block share insights and anecdotes. In the story, EWTN star of "Savoring Our Faith" and author of "Grace Before Meals" Fr. Leo Patalinghug also talks about the spiritual and family emphasis of his food-and-faith apostolate.

Over the next five years parishioners of the Honolulu Diocese will be adjusting themselves to a revised calendaring of Confirmation. The sacrament will come to be received in the second grade in conjunction with First Holy Communion rather than at high school age. The modification will be staggered throughout parishes. First Penance will continue to be administered in second grade before Confirmation. Bishop Larry Silva announced the change last April and published details on Jan. 10 in a "Decree of Promulgation" for the "Norms for the Preparation for and Celebration of the Sacraments of Initiation and First Penance."

Springfield, Mass. Bishop Mitchell T. Rozanski issued a pastoral letter on Ash Wednesday in conjunction with the Holy Year of Mercy. He includes an apology to clergy sex abuse victims and asks forgiveness of Western Massachusetts Catholics "pained by the clergy sex abuse scandal, church closings and any disconnect from their local parishes," reports the Berkshire Eagle newspaper.

The poor, needy are your treasure, pope tells Sant'Egidio Community