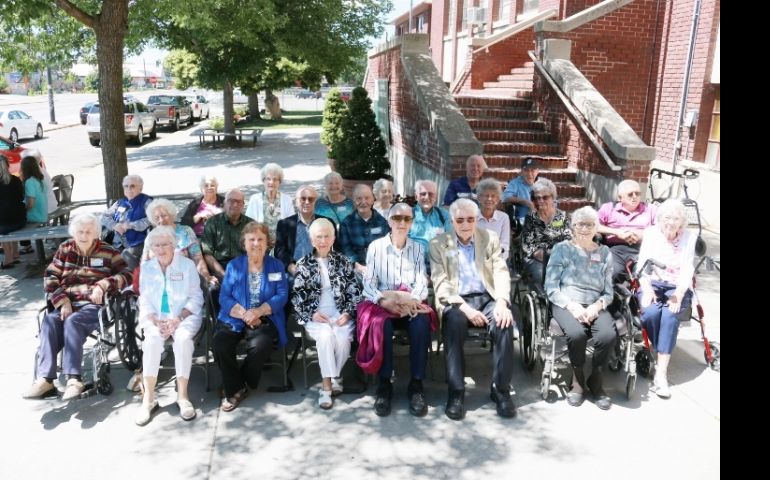 For the past four years, Boise, Idaho's St. Mary Parish has hosted "a party for an exclusive, but sometimes overlooked, part of its downtown parish -- its nonagenarians. One has to be 90 to be a guest of honor at this birthday bash," writes Deacon Gene Fadness. Planners thought the first en masse celebration of parishioners 90 and older would be a one-time event. "But each year, parishioners and a growing number of 90-year-olds inquire about when the next party will be," reports Fadness.

Part of a poignant tangle of coincidences, a moving essay on marital love by Fr. Patrick Beretta appeared in the Montana Standard newspaper on June 11, the wedding day of Michael Satterthwaite and Jovylyn Link. Their marriage made headlines because of its outdoor celebration, an event made possible by the Helena diocese's recently relaxed regulations on where weddings may be held.

Pastor of Butte's St. Patrick and Immaculate Conception parishes, Beretta officiated at Jovy and Mike's marriage. His essay, however, shared the story of another non-church-site wedding he had officiated, this one May 7 at a parishioner's home where the groom was under hospice care. Wrote Beretta, "The groom tenderly praised his bride who responded with tears mixed seamlessly with laughter. It was clear to everyone that this was a moment of Grace. ... John and Sonia formed a dream team." John died two weeks later. His funeral was June 11, the day Mike and Jovy wed.

According to a recent survey by the American Bible Society, 77 percent of Catholics want to read the Bible more often. Might that be good news for the publishers of a new translation of the King James Bible featuring emojis (pretend there is a bright yellow smiley face here) and using Tweet slang like "ppl" rather than "people" or "y" for "why?"

A grass-roots, all-volunteer ministry to women, men and families who have experienced miscarriage or early infant loss has been launched in the Fargo Diocese. "To truly be a Church that spreads life and love we must reach out to those who are suffering the loss of a child. We must teach the truth that these babies have dignity and that we have hope in their eternal life with Jesus," writes Katie Eskro, one of the founders of Finding Hope Ministries. The Eskro family suffered the loss of their third unborn child in 2014. Finding Hope is sponsoring a no-cost July 30 retreat at Holy Cross Parish in West Fargo. It will include dialogue and presentations by Nathan and RyAnn Carr, founders of Immaculate Hope Ministries. The Fargo Diocese lists Finding Hope Ministries among resources for those suffering such losses.

Among resolutions to be addressed at the June 27-30 meeting of the Association of U.S. Catholic Priests will be one in favor of permitting lay men and women to preach at Mass. The Vatican newspaper recently seemed to propose the same thing, and there has been much discussion on the topic in the U.S., hotly in the Rochester diocese. To be held at Crowne Plaza Chicago O'Hare Hotel, the AUSCP gathering will feature addresses by Vietnamese-America theologian Fr. Peter C. Phan of Georgetown University on the theology of migration; by Sister of St. Joseph of Philadelphia Carol Zinn, former president of the Leadership Conference of Women Religious (2012-2015), on the papal encyclical Laudato Si' and its message for parishes; and by church historian Massimo Faggioli on Pope Francis and Vatican II.

The priests will also consider "several resolutions" on gun control and violence. According to an AUSCP press release, those resolutions were "prepared before the horrific gun violence in Orlanda" and now "take on new urgency."