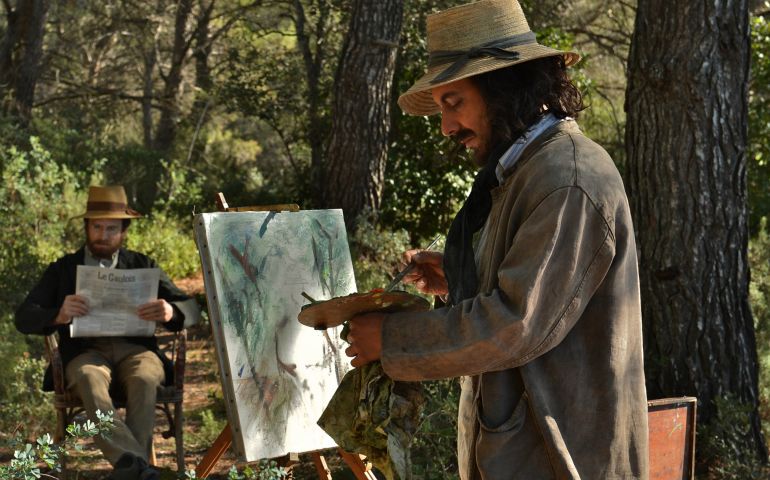 The post-impressionist painter, Paul Cézanne (1839-1906) and writer Émile Zola (1840–1902), were childhood friends who grew up and went to school together in Aix-en-Provence, France. We know Cezanne by his art and Zola through his large literary output, including his famous 1898 open letter "J'Accuse." Both men were Catholics who left the church, though Cézanne returned to the practice of his faith in the last 15 years of his life, while Zola, through his anti-Catholic and anti-clerical writings, antagonized the church — a sentiment the church readily returned.

In "Cézanne et Moi" ("Cézanne and I"), Paris-based writer/director Danièle Thompson takes a long look, not at their lives or faith but at their friendship. "What intrigued me," Thompson told me in a phone interview, "is that I was ignorant of their long-lasting friendship and how and why it broke up 35 or 40 years later. About 20 years ago, I read a short article about them in a magazine. I knew about Zola from his books and Cézanne from his paintings, but not that they had been such close friends. I promised myself that one day I would research their story."

In this lavish production, Thompson takes us on a journey through a friendship where opposites attract. Cézanne came from a wealthy family and did not get along with his father but depended on him for support; Zola's father died very young leaving him and his mother in very poor circumstances and Zola working hard to earn his way. Neither excelled at academics. When the two young men relocated to Paris, both became involved with women before settling down — if this is what you can call it. Zola, who looked down on the bourgeoisie, became famous when his romantic fiction began to be published, and eventually he became wealthy and part of the very social class he had despised. Cézanne achieved only minor success by the time he died at the age of 67, childless. Zola, who died about four years before Cézanne, did not have children with his wife but did father two with his mistress.

"Friendship," Thompson told me, "is more complicated than love. In a way, friendship is free; it comes with loyalty and choice but no commitment as with marriage. When you try to build a marriage, or love and a relationship, you create something concrete, you commit to it. But friendship is much more volatile, much harder to survive. Everything in a friendship can be threatened, the people you choose to become close to, those you invite to be near you. Something always threatens friendship.

"I found that for these two men it was particularly interesting because they adored each other as little boys, like you cannot imagine life ever separating you from your best friend in school; he or she is the most important person in your life, more than your parents and you cannot image that you can lose this. You try to keep that friendship alive as you try to keep youth alive."

Thompson opens the film with Cézanne (Guillaume Canet) arriving to visit his old friend at Zola's (Guillaume Gallienne) manor house after the publication of The Masterpiece (L'Œuvre) in 1886. This visit frames the film. The men are not at ease with each other; Cézanne seems offended and Zola defensive. We discover that Cézanne thinks he is the basis for the main character of Zola's novel, a failed man who ultimately commits suicide. Through flashbacks, Thompson draws the story of their friendship through the mistakes they made, the challenges they faced, the struggles they endured, and the events and people that were part of their lives. Famous artists and writers make appearances as well, notably Claude Monet and Édouard Manet, who do not appreciate Cézanne's natural style (he painted his subjects outside as they appeared rather than in a studio) and writers such as Guy de Maupassant.

There is actually no record of Cézanne and Zola meeting after their breakup over The Masterpiece. Thompson asks what another encounter might have been like and imagines a very poignant moment at the end of the film, when Zola visits Aix several years after the Dreyfus affair (which he did). Cézanne catches sight of him at an outdoor café and overhears his former friend say (as he actually did write), "Cézanne was a genius, but an aborted genius." Crushed, Cézanne turns away.

In the two years before she began shooting the film, Thompson visited galleries in France and the U.S. and took photographs of paintings from the mid- to late-19th century that showed hairstyles and clothing, as well as the art of impressionists and post-impressionists. She created a large scrapbook that she shared with her production crew and costume and set designers to give them direction for this period drama. Getting the details right was part of the fun of making the film, said Thompson.

Friendship is the overarching theme of "Cézanne and I," a film that is as artistic as the men it depicts.

In French with English subtitles.

Jesus is all over the small screen, and that's no accident