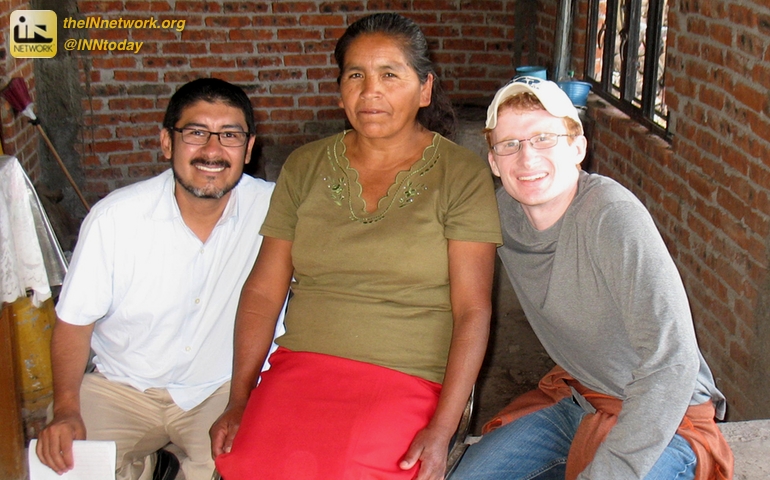 This week, I've been shooting interviews in Washington, D.C., for "Blood In Our Backyard," a documentary Loyola Productions is producing to mark the 25th anniversary of the El Salvador martyrs. But back in Los Angeles, the IN Network team caught up with Fr. Alejandro Olayo-Méndez and Fr. Bryan Norton, two Jesuits featured in this week's video. We actually shot this two years ago, but it couldn't be more timely -- just in the past two weeks, Pope Francis has called for "globalization of charity" to protect migrants, the Obama administration and Arizona's governor have clashed over immigration, and California's Gov. Jerry Brown (fun fact: a former Jesuit) signed three controversial immigration reform bills.

Migration remains just as polarizing since we shot the video in 2012, but in the interval, there's been a shift in the popular perception of a migrant. Now, more than ever, when we're talking about migrants, we're talking about vulnerable children. In July, Pew reported there's been a 117 percent increase over 2013's number of children 12 and younger crossing the border alone. This fact challenges a long-standing system where matters of illegal immigration are often considered issues of national security.

"Is a 12-year-old fleeing gang violence really a security threat?" asked Alejandro, who is currently reading for a doctorate at Oxford in International Development, focusing on migration and humanitarian aid. "When you look at this with your conscience, are these people going to hurt us?"

Though Alejandro researches in a traditional academic setting (examining migration internationally, not just in the United States), he's also committed to doing work in the field, something that energizes his academic pursuits. In 2012, he led six Jesuits on a five-week journey through the Mexican migration corridor to better understand the circumstances of migration. The IN Network met up with the group on the last day of their journey in Nogales, Ariz.

"It was probably one of the most difficult things I've ever done, but certainly one of the most graced experiences of my life," Fr. Bryan Norton, one of the Jesuits who accompanied Alejandro, told us this week from Xavier University where he's currently teaching Classics.

"We always want to fix suffering, but sometimes all you can do is just be there with people," he said. The group encountered wives with missing husbands, parents with missing children and many people who attempted the journey and had been sent back, often with lost limbs and other mutilations from the dangerous conditions.

"All these people were telling us their stories, but it was really hard to be present to their suffering," Bryan said. "Some were asking us for solutions, asking us what we are going to do. But we were there because we didn't know what to do ... and we wanted to begin to understand and open ourselves up to be transformed by the migrants."

When we asked Alejandro about a solution, he made it clear he doesn't see it as "a problem to be fixed."

"We are people that move. It will always be that way. The U.S. is built on the experience of moving from one place to another. The problems come when we try to control or select who can get in and who can't, living by fear instead of realizing just how connected we all are."

"We need to not close our eyes, but to notice the other," he said. "I think that as long as the children reach our borders, the U.S. has the responsibility to deal with them as asylum-seekers. Because right now, they're being sent back. Many will die, be recruited by gangs ... it's a vicious cycle."

Alejandro, Bryan, and the other Jesuits who traveled the 3,000 miles in five weeks didn't have days off, usually slept on concrete floors in shelters, and experienced illness from the conditions. "It was very intense, and there was no time to process, no down time," Bryan said. "But that's what the migrant experience is: constant movement."

Despite these challenges, the Jesuits knew their hardships paled in comparison to what most migrants typically endure. Bryan continues to reflect on what motivates so many migrants, knowing they could get hurt, be separated from their families forever, and possibly die.

"I learned on this trip that nobody wants to leave home. It doesn't matter how broken your family is or how violent your neighborhood is. Home is sacred," he said. "They're leaving because it's an absolute last resort. It's not about going to America and the American dream or finding a job, it's about, 'My life is in danger. I cannot live here anymore. The rights I'm accorded by nature as a human being are not being recognized.' "

Alejandro spoke of the complicated reality of the parents sending their children on this journey alone: "These children are being pushed into adult roles at very young ages ... but their parents often see this journey as their only chance. The image that comes to mind is the story of Moses, when his mother pushes him into the Nile. She's not sure if Moses is going to make it, the only thing she's thinking is 'I don't want Moses to die.' So, it's an act of faith where all she can do is pray he will be well-received."

On Sept. 23, Pope Francis called for "a globalization of charity" to protect migrants. "Jesus Christ is always waiting to be recognized in migrants and refugees, in displaced persons and in exiles, and through them he calls us to share our resources, and occasionally to give up something of our acquired riches," he wrote.

The pope has made migration a central topic of his pontificate and takes issue with the current governmental efforts: "A more decisive and constructive action is required, one which relies on a universal network of cooperation, based on safeguarding the dignity and centrality of every human person."

We asked Alejandro about individual efforts: What can those of us not in government do? "We need to not turn a blind eye, or say 'I can't do anything.' You can read the news and ask yourself, 'What is going on here?' and put pressure on your representatives," he said. "It's challenging because it's very easy to forget. As long as I don't see [the migrants], the migration issue is placed very low. ... We're challenged when we see these issues of race, poverty, migration. ... It makes people uncomfortable. But I'm glad this issue makes us uncomfortable, because it can cause us to reflect and advocate for those on the margins, the people with no voice."

Don't miss our look into the Jesuits' experience on the migrant's journey in this week's video and let us know your thoughts in the comments below.