Following Francis in the dark hours 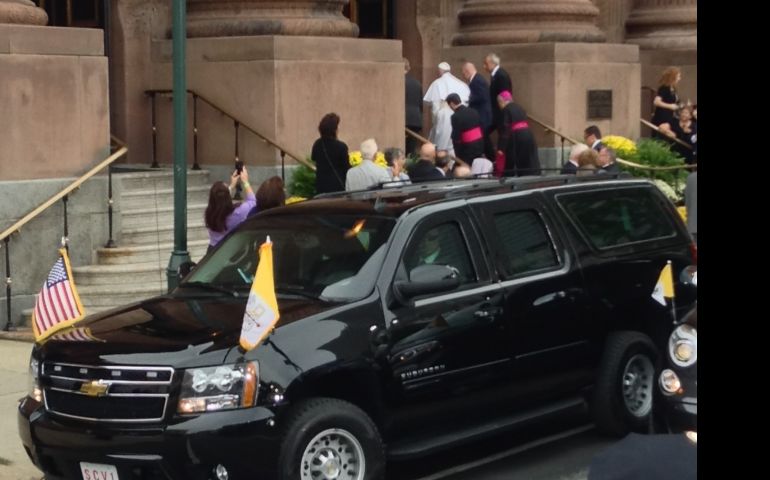 Philadelphia — I have to admit that I was a little nervous about navigating the Philadelphia streets in the small hours of the morning. What sane woman traverses empty, darkened streets at 3:30 a.m. when she can avoid it?

But if I wanted to arrive at the Convention Center, pick up my “underlay” (credentials to attend the pope’s basilica Mass) and join other journalists on the bus to drive approximately seven blocks to the Cathedral, I had to show up, along with everyone else, at roughly 4 a.m.

As it turns out, the streets were by no means empty. Soldiers stood on quiet corners, or rested on the steps of darkened stores. Workers carefully dropped concrete blocks into intersections.  Law enforcement agents representing various agencies watched me carefully.

Outside the city’s main police station, I passed a group of people walking in the opposite direction. Turns out they were headed to Independence Hall where the pope is scheduled to speak late Saturday afternoon. The gates for that event opened at 6 a.m. -- and the pilgrims had begun their walk east around 1 a.m.

Journalists arrived at the basilica as dawn was beginning to break. But Pope Francis fans had beaten us to the punch. Though only the hardiest had showed up by the time we arrived, the numbers of fans built throughout the morning until the Benjamin Franklin Parkway was a sea of watchful eyes.

As the sun rose higher in the sky, the activity around us quickened. Local police and state troopers arrayed themselves in front of the risers I shared with broadcast media outlets hailing from areas as geographically diverse as Pittsburgh and Florida. First the blue-robed choir (the ethereal strains of their songs relayed over the loudspeaker to the crowds outside), then clergy bedecked in gold chasubles strolled down the sidewalk in front of us -- many of them stopping to take a quick selfie to mark the historic occasion.

Then it was time. Police on motorcycles preceded the pope’s car, lights flashing and sirens blaring, and the crowds dull roar became a torrent of sound.

The pontiff exited the car, greeted a few dignitaries, walked into the Cathedral, and was lost to the onlookers outside. While the words of the Mass echoed through the plazas and streets leading to the art museum, it was difficult to discern the language in which the liturgical celebration was taking place.

Julia Zuluada, who is pregnant, had traveled from Florida to see if the pope would bless her unborn child. “Why not?” she asked me. “Everything is possible.”

“It’s very emotional,” says Gabriel Ochoa, who traveled from Arizona (and missed three days of work) to follow in the footsteps of his grandmother, who had made a similar trip when Pope John Paul II visited in 1979. He wasn’t sure, he said, that his boss understood -- “not everyone gets religion.”

After the service was over, the pope didn’t reappear, perhaps disappointing the faithful group who had waited, chanting “Pope Francis” loudly as the crowd of more than 1,600 spilled out of the massive wooden basilica doors.

But Sr. Mary Barbara Randolph, a Dominican of Hawthorne who works in a troubled area of the Philadelphia ministering to the dying, had been worshipping inside the basilica -- and was practically ebullient. The experience was more than she had dared dream of, she told me, standing with two of her sister colleagues in the shadow of the basilica. Though it took me more than 15 minutes to navigate my way back to the media filing center though the growing hordes who now filled the street, it looked like they were having a wonderful time, too.

Religion is part of holistic education of children, pope says