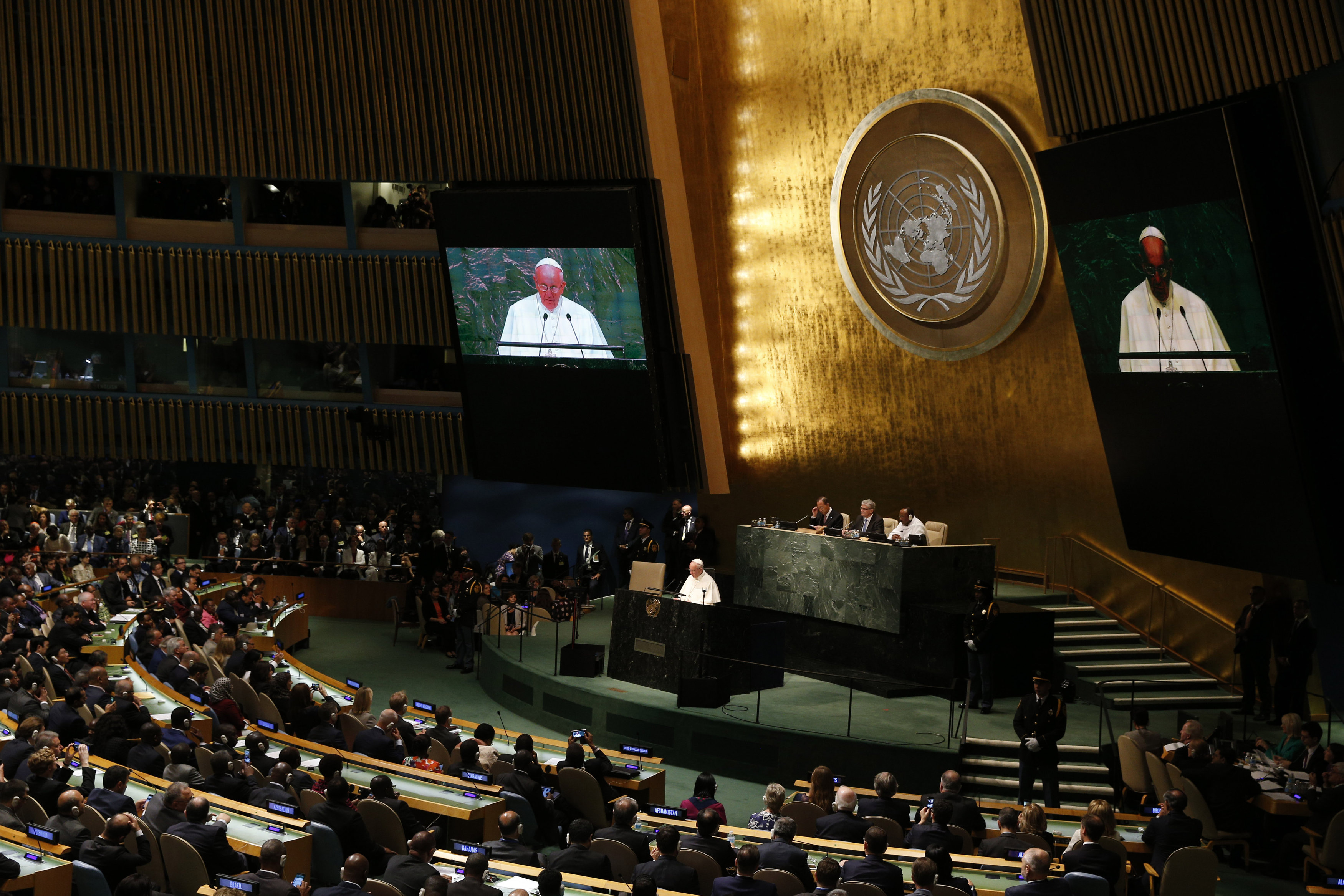 Editor's note: NCR will be tracking reception to Pope Francis' visit to the United States. Check back at this post throughout the day as it is updated with the latest reactions.

A cascade of prayer

Philadelphia -- Prayers hang like tiny pennants outside the chapel by the Basilica of St. Peter and Paul, a collage of faith and perseverance.

Prayers for a cure to childhood cancer; for world peace; for Emma. Prayers asking, "Please protect my son while he’s driving."

They cover the metal railings, climbing up the reddish brown walls of the Basilica, linking eaves with pavement in a cascade of petitions.

On this sunny day in Philadelphia, the last before Pope Francis arrives and the World Meeting of Families closes, the line of visitors and locals eager to add their plea to the ever-growing sea of tied ribbons covers at least a city block of petitioners who have maneuvered barriers and checkpoints to share their most private prayers with a host of strangers.

The project eliciting such an enthusiastic and heartfelt response was the brainchild of the Committee on Hunger and Homelessness, headed by Philadelphia Mercy Sr. Mary Scullion. Specifically created by artist Meg Saligman for the World Meeting of Families, the rounded structure on the Cathedral grounds houses a replica of a painting Pope Francis has said was his favorite -- Mary, Untier of Knots.

Valerie Haas, who flew in from Denver to attend the World Meeting of Families with her husband and two of her children, requested prayer for her children, a granddaughter, her sister, and for her sister’s husband’s conversion. Daughter Julia, a high school senior, asked others to pray that she would make a wise choice of college and future spouse.​​

Julia’s younger sister Natalie hoped that God would keep the city safe for the pope’s visit. Natalie also prayed for an end to abortion

and for a smooth start to the pro-life group she’s starting at her high school. Valerie Haas’ husband Brad hoped that more people would come to recognize the power of prayer.

Olena Pyontyk, born in Ukraine, recently moved from New York City to Philadelphia.  She said she’s not even Catholic. But she wrote out a knotted slip, too, for her husband and son -- because she likes the Cathedral, because the people of Philadelphia are so friendly, and because it’s just a good idea -- as anyone looking at the surging crowd can see.

New York -- “What’s been brilliant about Pope Francis’ visit is the way that he’s included everyone -- not just Catholics but people of all faith traditions or no faith traditions,” said Rev. Chloe Breyer, executive director of the Interfaith Center of New York and an Episcopal priest at St. Philip’s Church in Harlem. “He’s a tremendously inclusive person in a time when public figures are polarizing.”

Breyer said attending Friday’s service at the 9/11 Memorial Museum was a sobering experience for her and for other faith leaders in New York, because it reminded them of the days after the World Trade Center attack, when they volunteered as chaplains. Going back to the site she remembers as piles of rubble brought back memories of the tragedy in some ways, Breyer said, but she could also see how far the religious community has come since then.

“We are more aware of New York’s religious leaders now than we’ve ever been before,” Breyer said.

New York -- Native American faith leaders who attended the interfaith service at the 9/11 Memorial Museum said being invited to the event was a step in the right direction, but they were disappointed that they were not asked to participate in the ceremony along with representatives of other faiths.

“For me, it was a good first step that we were included, but I would like to see some of our people be able to pray in their own language as well,” Diane Fraher Thornton, a member of the Osage and Cherokee nations. “Our love for the Creator and Creation is so much a part of who we are.”

Oren Lyons said he and other members of the Six Nations of the Iroquis Confederacy, a group of Indian nations based in New York, came to the event with a purpose.

“We’re requesting the pope rescind the Doctrine of Discovery,” said Lyons, Faithkeeper of the Turtle Clan of the Onondaga Nation. He said leaders of the Six Nations have brought Pope Francis a letter asking him to rescind the document signed by Pope Alexander VI in 1493, which stated that Christian leaders had a right to claim land in America, but Native Americans could only inhabit it.

“We want him to address it and we’ll pursue it,” Lyons said, adding that the document still has an impact on land rights. “If there’s any pope that’s going to do it, it’ll be this guy.”

Regarding the recent canonization of Franciscan Fr. Junípero Serra, Lyons said: “I don’t understand how they can canonize a man who’s responsible for so many deaths, and slavery.”

Chief Sidney Hill of the Onondaga Nation said he was disappointed that security at the 9/11 service asked him to remove his headdress before going inside. He said he was told the antlers on his head covering, which also includes bead embroidery and feathers, could ostensibly be used as a weapon.

“It’s disrespectful,” Hill said. “Everyone else has their headgear on,” he added, referring to other faith leaders.

Argentine scientist: Francis' message "can change the way things are done in the world today"

One environmentalist in Pope Francis' hometown of Buenos Aires said that the Friday address to the United Nations general assembly and Thursday's speech to the U.S. Congress were perfect examples of how the pope is able to "synthesize and adapt his message to the audience, making it very clear, explicit, simple, and practical."

"When he defines a healthy environment as a human right very clearly, why we have to defend it, and the fact that every single creature has the right to exist, it's probably one of the most beautiful definitions of the right to the environment," said Pablo Canziani of Acción Católica Argentina and author of Perspectives on the Environment, a book series which merges scientific research and Catholic doctrine.

"He does not use the explicit term 'climate change,' which might to a certain extent -- especially yesterday in Congress --  generate a negative reaction, but rather, he points to the positive aspects of all the issues. In that way, people cannot go against him because he's just highlighting something that cannot be denied."

Canziani said that what stood out to him was Francis' ability to weave together issues that best show how "everything has to do with everything; we cannot treat things in an isolated fashion." A healthy environment where the dignity of all people is respected, he said, relates to the gender issue in education, turning to equality for men and women.

"It's a network rather than a sequence of issues, and we need to solve them all in order to create a healthy environment," he said. "We need to rethink the economy in that context, rethink human activities, rethink education."

Despite Argentina coming to the end of its election cycle in the midst of an economic crisis, Canziani said cable TV and local radio stations broadcast the speech, and Francis at the UN still stole newspaper headlines.

"As we say back home, 'He's a Jesuit' -- he knows how to get the message through and adapt the circumstance."

"I do hope there is a 'before and after' to this visit with Cuba and US in the world," he said. "He is making very strong messages, and maybe we don't realize the strength of those messages right now because it's so immediate, but I think those messages can hopefully -- and I expect it will, indeed, happen -- change the way things are done in the world today."

Michael Sean Winters, who writes a daily column, Distinctly Catholic, for the NCR website, continues his running commentary on the papal addresses.

The Holy Father’s presence and remarks at the Inter-Religious service at Ground Zero in Manhattan do not need much commentary. The service was both complicated and simple, the diverse religious voices and colorful vestiture of the clergy speaking to the complexity of American religious experience, the prayers all striking a common theme: God calls humans to act humanely and He comforts those who are afflicted when some humans fail that simple measure of decency.

Global activism for the poorest among us

Pope Francis, after he finished the encomiums to the UN, jumped right into one of the international system’s most egregious injustices, the role that international financial organizations, such as the International Monetary Fund, play in facilitating a rigged financial system that exploits the poor.

Read the full report: Pope Francis at the UN

"It was absolutely perfect. I always say that the Pope brings good weather," said Arvind Vora, a UN representative of the Jain faith who attended the service on behalf of the organization Anuvibha of North America. "He is picking out the best of each tradition," he added, in reference to the pope's earlier remarks on combating climate change -- which resonated with the beliefs of the Jain tradition.

Read the full story, At Ground Zero, Francis asks 9/11 families to be instruments of peace.

Watch the livestream of Francis' address on Catholic News Service and USCCB.

Philadelphia -- In an informal gesture of ecumenical fellowship, the Episcopal Church of St. Clement's,  under the leadership of rector Richard Alton will be hosting 123 adults and 62 children coming to the city for the culminating celebration of the World Meeting of Families and the Pope's visit this weekend.

A few blocks from the Benjamin Franklin Parkway, where many of the weekend's events will take place, the historic "Anglo-Catholic" parish has stockpiled supplies to feed the visitors, members of the Neocatechumenal Way, a lay organization dedicated to adult Christian formation -- a group that hasn't always had tranquil relationships with church authorities.

Though the church pews are empty now, they will soon be occupied by the sleeping visitors (as will the chapel, parish house and rectory showers) from St. Francis Xavier Church in Newark, New Jersey, engaged in a form of holy camping. We'll check back in with them later this weekend to find out how they fared.

Right here you can watch Tom Roberts, NCR editor at large, who made an earlier appearance on C-SPAN this morning. Roberts discusses the pope's visit and his address to U.S. bishops.

In a commentary on NCR Today, presidential candidate Hillary Clinton writes: “As a person of faith, a mother, and a grandmother, I am deeply moved by Pope Francis’ teachings on climate change.  … There’s no time to waste. We have to act now.”