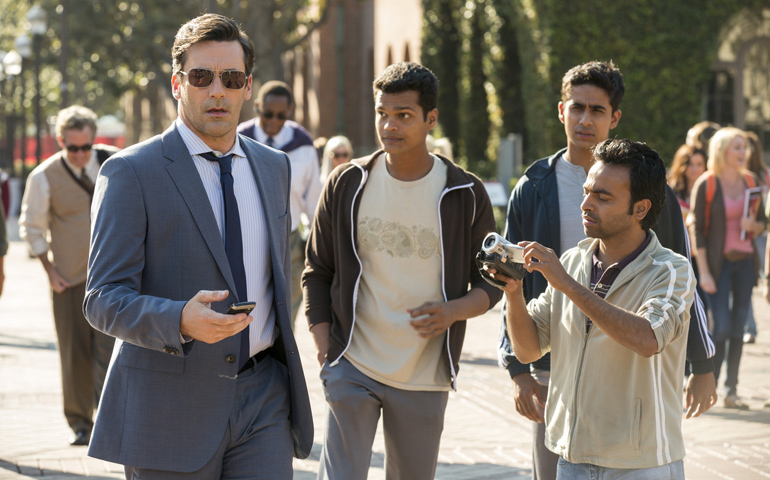 "Belle" -- This film is based on the true story of Dido Elizabeth Belle (Gugu Mbatha-Raw), the illegitimate mixed-race daughter of a British sea captain (Matthew Goode) in the 18th century. Belle grows up with a cousin in the mansion of her uncle, Lord Mansfield (Tom Wilkinson), the chief justice of England, and his wife (Emily Watson). It is a story about the power of cultural mores and the law when England was beginning to challenge the legitimacy of the slave trade. Belle influences her uncle in a case that begins the process of bringing the slave trade to an end. Fine acting, excellent production values and most artistically framed, both visually and as a story.

"Million Dollar Arm" -- Based on the true story of a desperate sports agent, the movie follows JB (Jon Hamm), who goes to India to find the next great baseball players. He sets up a reality show with an aging baseball scout (Alan Arkin) and manages to discover two young athletes who know nothing of baseball, Rinku (Suraj Sharma) and Dinesh (Madhur Mittal), but who throw the ball at 84 mph the first time they try. JB brings them back to Los Angeles, where they start learning and playing baseball and suffer culture shock. JB goes from being a desperate jerk to a human being -- and then there's baseball. Lake Bell plays Brenda, a medical student who rents the guesthouse behind JB's home, and she becomes the mother figure to the homesick lads. It's about family; it's funny and touching. I liked it -- if only there had been a message at the end saying that Disney was developing a sports academy for poor children in India with the proceeds from the film!

"Chef" -- This is a food/road-trip movie with a lot of heart. The master chef of a trendy Los Angeles restaurant, Carl (Jon Favreau, who also directs), is fired by his boss (Dustin Hoffman) over a culinary disagreement. His ex-wife, Inez (Sofia Vergara), has been telling him to start a food truck like those in Miami that they used to like when they first met. She gets him to come to Miami on a business trip so he can take care of their 10-year-old son, Percy (Emjay Anthony). Carl buys a food truck, father and son work together to get it ready, and Carl's old sous chef Martin (John Leguizamo) flies out to join them. They make a road trip from Miami to LA and learn a lot about family along the way, especially Carl. Honest, you won't even notice the language after a few minutes.

"Fed Up" -- Joining the growing lineup of documentaries about the food industry, this one rightly (in my opinion) demonizes sugar, calling it the new tobacco because the food industry, with the FDA's collusion, puts sugar or one or more of the myriad sweeting forms in all processed foods, whether they need it or not. Though not a perfect film, it is an important one that addresses the fallacy that it's what you eat that matters, not the "calories in, calories out" refrain the food industry -- and some doctors -- continue to teach us.