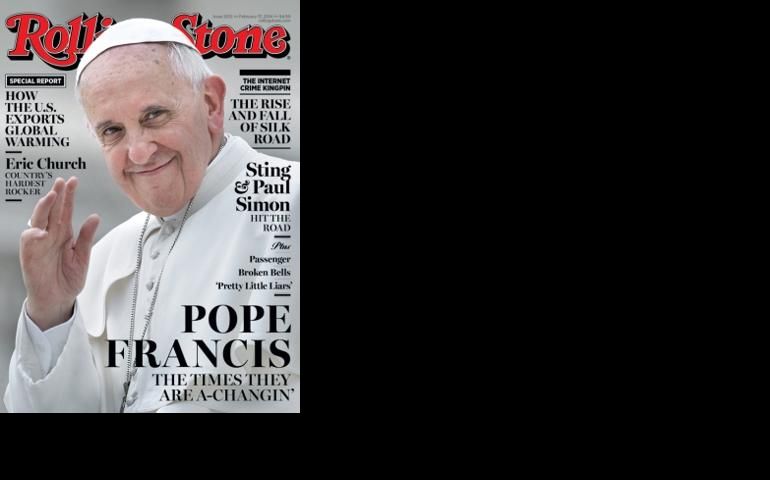 Pope Francis continues to take the world by storm.

His latest media triumph, a cover story on, yes, the Rolling Stone this week.

“The Times They Are A-Changin':  Inside the Pope's gentle revolution," is a 7,700-word profile by contributing editor Mark Binelli, who writes, "In less than a year since his papacy began, Pope Francis has done much to separate himself from past popes and establish himself as a people's pope.”

In the last few months Francis has appeared on the covers of Time (“Person of the Year”),  The New Yorker, The Advocate (“The Person of the Year”), and Vanity Fair (Italian issue), among a dozen or more others -- to say nothing about Catholic publications such as America and the National Catholic Reporter (Of course).

And the press has been almost to the last word, very supportive.  Our church has not had a run on this kind of good press for close to four decades, if ever.

After the disastrous papacy of Benedict, a staunch traditionalist who looked like he should be wearing a striped shirt with knife-fingered gloves and menacing teenagers in their nightmares, Francis' basic mastery of skills like smiling in public seemed a small miracle to the average Catholic. But he had far more radical changes in mind. By eschewing the papal palace for a modest two-room apartment, by publicly scolding church leaders for being "obsessed" with divisive social issues like gay marriage, birth control and abortion ("Who am I to judge?" Francis famously replied when asked his views on homosexual priests) and – perhaps most astonishingly of all – by devoting much of his first major written teaching to a scathing critique of unchecked free-market capitalism, the pope revealed his own obsessions to be more in line with the boss' son.

An interesting reflection on Pierce's essay