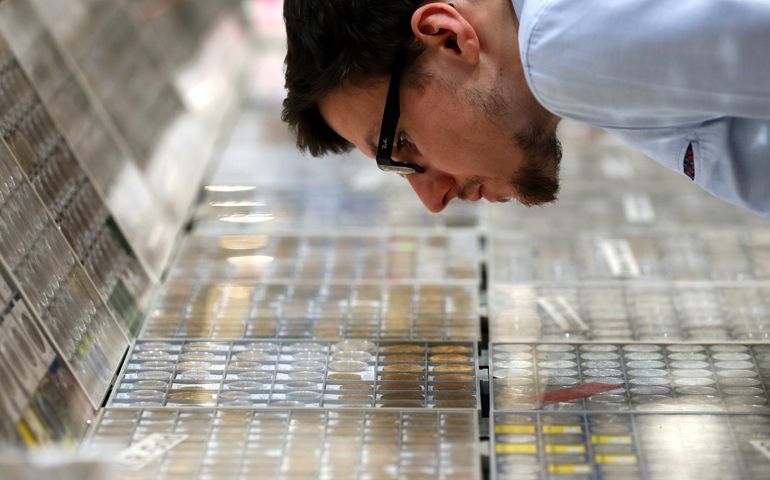 Vatican City — Pope Francis has bluntly called on Christians to abhor what he terms "the love of money," warning in his message for the 2017 Lenten season that the desire for wealth can become a "tyrannical idol" that blinds us from the needs of our neighbors.

Repeating St. Paul's words of caution to the early Christian communities that "the love of money is the root of all evils," the pontiff says such idolatry "is the main cause of corruption and a source of envy, strife and suspicion."

"Money can come to dominate us," the pope warns. "Instead of being an instrument at our service for doing good and showing solidarity towards others, money can chain us and the entire world to a selfish logic that leaves no room for love and hinders peace."

Francis makes his warning in his message for this year's Lenten season, released by the Vatican Tuesday. Given the title "The Word is a gift. Other persons are a gift," the pontiff's message focuses on a parable Jesus offers to his followers in Luke's Gospel.

In the parable, Jesus describes a rich man who enjoyed his life, ate sumptuous meals, but ignored a poor beggar named Lazarus who lived outside his door. Suffering in Hell after death, the rich man cries out for help. He asks that Lazarus be allowed to at least dampen his lips with water.

"The rich man's greed makes him vain," Francis says of the man's choices while he was alive. "His personality finds expression in appearances, in showing others what he can do. But his appearance masks an interior emptiness. His life is a prisoner to outward appearances, to the most superficial and fleeting aspects of existence."

"The lowest rung of this moral degradation is pride," the pope continues. "The rich man dresses like a king and acts like a god, forgetting that he is merely mortal. For those corrupted by love of riches, nothing exists beyond their own ego."

"Those around them do not come into their line of sight," states Francis. "The result of attachment to money is a sort of blindness. The rich man does not see the poor man who is starving, hurting, lying at his door."

"Looking at this character, we can understand why the Gospel so bluntly condemns the love of money," says the pontiff, before quoting Jesus' words in Matthew's Gospel: “No one can serve two masters. He will either hate one and love the other, or be devoted to one and despise the other. You cannot be the slave both of God and of money."

Francis says that Jesus' description of the story, in which gives the beggar a name but does not give one to the rich man, shows that Lazarus is "a priceless treasure, a human being whom God loves and cares for, despite his concrete condition as an outcast."

"Lazarus teaches us that other persons are a gift," states the pope. "A right relationship with people consists in gratefully recognizing their value. Even the poor person at the door of the rich is not a nuisance, but a summons to conversion and to change."

"The parable first invites us to open the doors of our heart to others because each person is a gift, whether it be our neighbor or an anonymous pauper," the pontiff continues. "Lent is a favorable season for opening the doors to all those in need and recognizing in them the face of Christ. Each of us meets people like this every day. Each life that we encounter is a gift deserving acceptance, respect and love."

Francis ends his message with an exhortation to Christians to mark Lent, the six weeks of fasting, prayer and almsgiving before Easter that will begin on March 1, to use the season to serve others.

"Dear friends, Lent is the favorable season for renewing our encounter with Christ, living in his word, in the sacraments and in our neighbor," writes the pontiff. "The Lord, who overcame the deceptions of the Tempter during the forty days in the desert, shows us the path we must take."

"May the Holy Spirit lead us on a true journey of conversion, so that we can rediscover the gift of God’s word, be purified of the sin that blinds us, and serve Christ present in our brothers and sisters in need," he states.