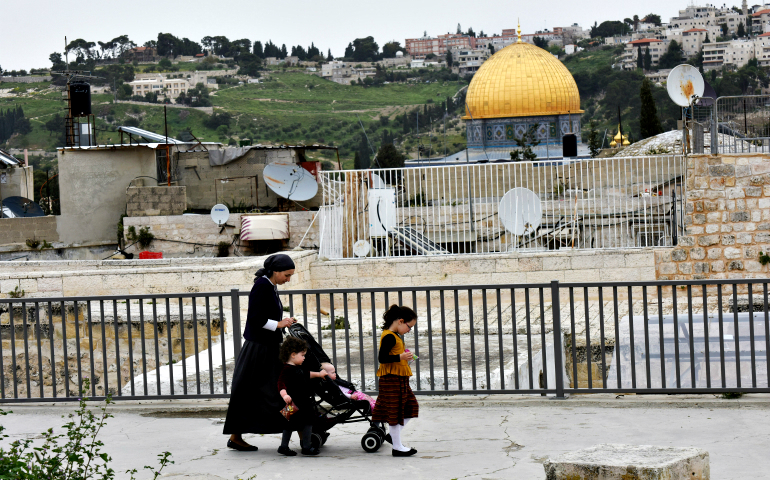 An Orthodox Jewish woman walks with her children on the roof in the Arab section of the Old City of Jerusalem on her way from an Israeli settlement March 26. (CNS/Debbie Hill)

The nomination of David Friedman, a bankruptcy attorney without an ounce of diplomatic experience, as the next U.S. ambassador to Israel by President-elect Donald Trump has set off alarm bells in major segments of the Jewish-American community, the U.S. diplomatic community, Israel, and the Arab and Muslim worlds.

An analysis in Israel's leading English-language daily, Haaretz, has said that "by Israel standards ... David Friedman is an "extreme right-winger" who "makes [current Israeli Prime Minister] Benjamin Netanyahu seem like a left-wing defeatist."

The analysis goes on to say, "It's good [Friedman will] be coming with diplomatic immunity: For some of his articles and statements, Friedman could get arrested by the Israeli police on suspicion of incitement."

Friedman's resume would be impressive if he was a far-right-wing member of the Israeli government but less so as the highest-ranking diplomatic representative of the U.S. government in Israel. One of the definitions of diplomacy is "skill in managing negotiations, handling people, etc., so that there is little or no ill will." Someone seems to have forgotten to inform Friedman of that.

Friedman has slandered J Street, a leading pro-peace Jewish American organization that believes "a two-state solution to the Israeli-Palestinian conflict is an existential necessity if Israel is to remain a Jewish homeland." He has referred to them as "kapos," the name for Jews who aided Nazis inside the concentration camps during the Holocaust.

On June 5, Friedman doubled down on that in an opinion column on the Israeli settler website Arutz Sheva by writing: "Are J Street supporters really as bad as kapos? ... They are far worse than kapos — Jews who turned in their fellow Jews in the Nazi death camps. The kapos faced extraordinary cruelty and who knows what any of us would have done under those circumstances to save a loved one? But J Street? They are just smug advocates of Israel's destruction delivered from the comfort of their secure American sofas — it's hard to imagine anyone worse."

On the issue of a two-state solution to the Israeli-Palestinian conflict, Friedman has loudly and proudly voiced his staunch opposition to a Palestinian state and has referred to the two-state solution as "an illusion that serves the worst intentions of both the United States and the Palestinian Arabs. It has never been a solution, only a narrative. But even the narrative itself now needs to end."

Friedman is dismissive of established international law that defines the lands occupied by Israel in 1967 as occupied; instead, he considers the land as Israel's. He has made the case for permanent Israeli control (read, annexation) of the West Bank, stating, "Under most calculations, if you took the entire state of Israel, from the Jordan River to the Mediterranean Sea ... if you annexed all of Judea and Samaria into Israel, the Jewish population would still be about 65% ... the whole idea that we have to jettison Judea and Samaria to retain the Jewish characteristics of Israel is just not true."

Perhaps most provocatively and potentially explosive in terms of damaging U.S. interests and credibility worldwide and serving as a key recruitment and propaganda tool for terrorist groups, including now the Islamic State group, is Friedman's statement that he looks forward to working "from the U.S. embassy in Israel's eternal capital Jerusalem" after it is moved from Tel Aviv.

If Friedman is permitted to unleash his hardline and extremist beliefs into action, the blowback will be significant, with no shortage of victims.

The most immediate victim will be the concept of a negotiated two-state solution to the Israeli-Palestinian conflict. While this may seem like a positive result to the politically shortsighted, the question then arises of what is left in its place.

Marine Corps Gen. James Mattis, Trump's nominee for secretary of defense, presciently summed it up at a conference at the Aspen Institute in 2013, when he implored the U.S. to work "with a sense of urgency" toward a two-state solution, due to Israeli settlement activity that was undermining the prospects of such a solution.

Mattis added that drawing a border to include the Israeli settlements in the West Bank where Palestinians are a majority meant that, for Israel, "either it ceases to be a Jewish state or you say the Arabs don't get to vote — apartheid. That didn't work out too well the last time I saw that practiced in a country," i.e., South Africa.

Mattis also touched on another victim of not resolving the conflict, namely U.S. national interests, credibility and influence. He stated that as commander of U.S. Central Command (encompassing the Middle East and North Africa), he had "paid a military security price every day ... because the Americans were seen as biased in support of Israel," dissuading Arab moderates "who want to be with us, because they can't come out publicly in support of people who don't show respect for the Arab Palestinians."

As U.S. influence wanes in the Middle East, the prime beneficiary will be Iran, whose star is now ascendant (along with Russia's) after its support for the Assad regime in Syria has tipped the balance in Bashar Assad's favor, perhaps permanently.

Meanwhile, traditional Arab allies of the United States will be dragged down by the U.S. loss of influence. This was predicted in 2010 by then CENTCOM commander Gen. David Petraeus, who told the Senate Armed Services Committee that the Israeli-Palestinian conflict "foments anti-American sentiment, due to a perception of U.S. favoritism for Israel. Arab anger over the Palestinian question limits the strength and depth of U.S. partnerships with governments and peoples ... and weakens the legitimacy of moderate regimes in the Arab world. Meanwhile, al-Qaeda and other militant groups exploit that anger to mobilize support. The conflict also gives Iran influence in the Arab world through its clients, Lebanese Hezbollah and Hamas."

The nomination of Friedman as U.S. ambassador to Israeli is one more indication that a Trump presidency will signal a fundamental and potentially dangerous break from U.S. and international precedent and norms on Israel-Palestine.

It can be argued that established norms have not achieved much in terms of Israeli-Palestinian peace yet, but throwing the baby out with the bathwater is certainly not the answer.