For the future of new evangelization, look to Ukraine 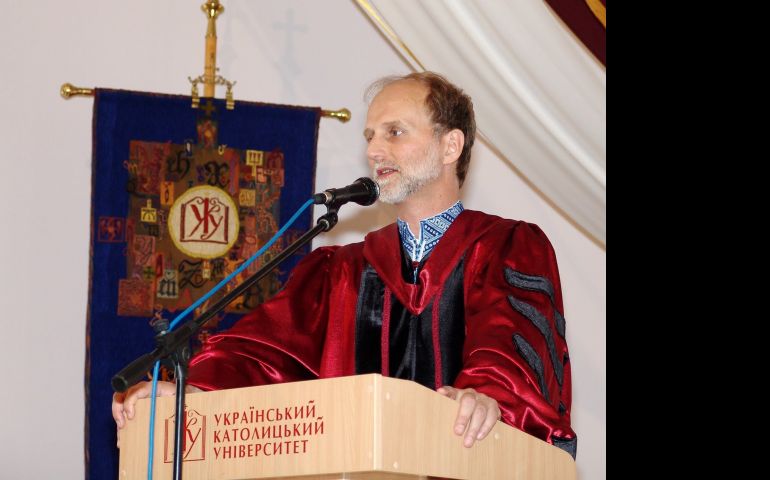 Lviv, Ukraine — Back in 1974, music writer John Landau achieved immortality after attending a set in the Harvard Square Theatre by a then-obscure act out of New Jersey, and declaring: "I have seen the future of rock and roll, and its name is Bruce Springsteen."

In a similar vein, let me say here and now: "I have seen the future of the new evangelization, and its name is the Ukrainian Catholic University."

If the place eventually becomes known as "the Boss" of Catholic evangelism, remember you heard it here first.

Located in Lviv in western Ukraine, the university is part of the revival of the Greek Catholic Church after the fall of the Soviet empire, when it was the largest illegal religious body in the world. The biggest of the 22 Eastern churches in communion with Rome, it has more than 3 million followers in Ukraine and around 5.5 million worldwide.

Its bold aim is nothing less than to "rethink" what a Catholic university can be in the 21st century.

I was at the university over the weekend for a speaking gig, and on Saturday, I sat down with Bishop Borys Gudziak, the rector and driving force. (Gudziak, 51, was recently named Apostolic Exarch of France, but he'll continue to play a role here.) He explained that during a reflection process in the early 1990s, planners identified two core challenges:

The response has been as acute as the diagnosis.

With regard to the martyrs, Gudziak believes a theological synthesis of their suffering will have less to do with doctrinal theory than an "ecclesiastical style," which he describes in terms of "humility" and "being close to the people."

"When times are difficult, you're stripped down and forced to look at the essentials," he said. "You fall back on the basic Christian experiences of being together, supporting one another, praying together and being community ... overcoming the negation of the Gospel without any pretense or imposition."

Gudziak believes that style is a "tangible presence" in Greek Catholicism, and not only because of the martyrs and the gulags.

"Our relationship of clergy to laity is also conditioned by the fact that our priests are married to lay women, and they have lay children at home," he said.

This combination of factors, Gudziak suggested, allows the university to be a place where a church that prizes humility, closeness to the people, and taking the lay role seriously becomes self-reflective.

As for the trust deficit, the response has been even more innovative. To help people learn to take off their masks, the university turned to the insights of Henri Nouwen, Jean Vanier, and the L'Arche movement, inviting mentally handicapped people to become part of their community. (Gudziak studied under Nouwen at Harvard.)

At the Ukrainian Catholic University, the mentally handicapped actually serve as "professors of human relations."

"This is not some kind of handout," Gudziak insists. "We need the gifts they have. They don't care if you're a rector, a doctor, or how rich you are. What they force us to confront is the most important pedagogical question of all: Can you love me?"

New residences include apartments for these "professors of human relations" to live among the university's students, becoming part of the daily fabric of their lives.

I asked Gudziak if this experience has actually helped make the university a more loving place.

"It's as if you put a shot of rum into some chocolate chip cookies," he said. "There's a different flavor, and if you know what rum is, you'll recognize it." Similarly, he said, if you know what love is, you'll feel it in the relationships these people have helped to forge.

All that would be remarkable under any circumstances, and the vision exercises a powerful gravitational pull. Deans with Ph.D.s from places such as Oxford and Harvard earn a salary that works out to about $9,000 a year, which admittedly goes farther in Lviv than in New York or Rome – but, let's face it, not that much farther.

In the context of present-day Ukraine, however, this place is nothing short of a miracle.

The country's political leadership is drifting towards old-school authoritarianism. Although there are roughly 170 universities in Ukraine, most are heavily dependent on state funding and thus tend to stifle dissent. Observers say only a handful foster a climate in which civil society can find its voice on issues such as corruption and the rule of law, and the Catholic University is perhaps the most visible example.

They've paid a price. A couple of years ago, Gudziak got a chilling visit from Ukrainian security agents suggesting that his students shouldn't protest a visit to Lviv by President Viktor Yanukovych, a pro-Russian figure whom many Ukrainians see as beholden to Moscow and to his country's oligarchs. Rather than kowtowing, Gudziak published a memo describing the meeting and outlining a broader campaign of harassment (including tapping his phones), which elicited support for the university from diplomats, NGOs, and a cross-section of Ukrainian intellectuals and activists.

Now the university is facing another round of pressure, with questions from government officials about its accreditation. Once again, all signals are that they have no intention of allowing themselves to be muzzled, believing that the road to democracy and an open society doesn't run in that direction.

I came to Ukraine this weekend thinking I was taking a break from the Synod of Bishops on the New Evangelization, where the focus is on reviving the church's missionary energies in the 21st century. I came back to Rome believing instead that I had seen the New Evangelization in action – a profoundly, palpably Catholic place, where the spiritual roots run deep, flying on the wings of martyrs and the mentally handicapped, and courageously engaging the issues of the day, even when doing so takes guts.

The university currently has an ambitious expansion plan, with construction already underway. Ironically, the new facilities are located on a stretch of land that once contained a massive Communist cultural center, which means that one vision of human society is literally being supplanted by another, this one rooted in Catholic thought and life.

People looking for information about the university can find it here: http://ucu.edu.ua/eng/

"In an era of globalization, we're seeing the ravages of ideological, national, ethnic and confessional particularism," Gudziak said. "We rejoice in the fellowship we have with Rome and the broader church, this global community of human beings struggling to live their God-given human dignity fully."

Frankly, the rest of us in that global community have solid reasons to rejoice at what's happening in Lviv.

For the future of new evangelization, look to Ukraine

The most direct path to sainthood

Trump's opposition to illegal immigration focuses only on Mexico