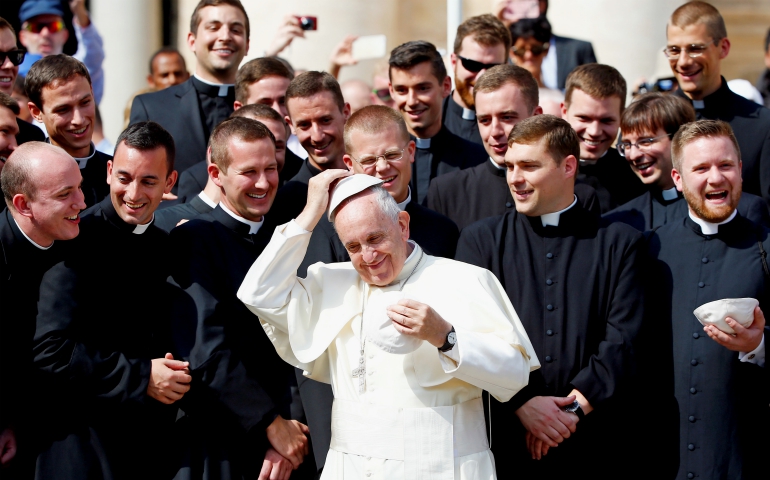 Pope Francis exchanges his skullcap as he poses with seminarians from the Pontifical North American College on Sept. 28, 2016, in St. Peter's Square at the Vatican. (CNS/Reuters/Remo Casilli)

My concern about the future of the priesthood in the United States has centered around everything I have heard and experienced involving those priests ordained in the last few decades. Now Time magazine presents a thoughtful article on the latest attitudes among seminarians today, and it is encouraging.

I should say that if I were writing my vision of the future of the Catholic priesthood, it would certainly include priests being able to marry if they choose to, and a priesthood that includes women in significant numbers. It would also include a clergy even less driven by doctrine than the young seminarians appear to be. Yet, the article does suggest that the youngest crop of seminarians is moving in a positive direction.

The article describes the post-Vatican-II clergy as "reserved men, removed and dogmatic, who present themselves at the lectern to guide their congregations." I would add that my sense has been that this generation of priests sees themselves and their function as sacred and cultic. This has created distance between them and the people. Of course, not all priests fit this stereotype, but it does seem to have some resonance.

The Francis effect seems to be changing that. No one would accuse the latest crop of seminarians and newly ordained as being wildly liberal, but change is evident, especially in the area of social justice.

Whereas the previous generation of priests showed little interest in social justice, that is not true of the newest generation. They are concerned about issues such as caring for the poor. They see themselves as ministering to all in their community — not just Catholics. One example involves outreach to the Muslim community around them.

Bishop Timothy Senior, who leads St. Charles Borromeo Seminary, near Philadelphia, says the style of leadership in the church needs to change to "servant leadership." This represents a substantial and positive move from what we have seen in the last few decades.

This youngest group of priests in training is not monolithic. They represent a variety of views, such as espousing the legalization of marijuana and a likely position of generally not preaching on abortion. They are comfortable with the use of technology, as would be expected. It is also important to note that they are growing — from 1,300 in 2005 to 1,900 seminarians in 2016.

On the other side of the spectrum, many still are enamored of the traditional high Mass with incense. They often prefer to wear the Roman collar when out in the community. On more important matters, they espouse conservative views on sex outside of marriage and remain traditional on matters of doctrine, such as the reality of the bodily resurrection of Jesus.

Listen to what a young priest has to say. As a priest, he wants "the ability to be creative, imaginative, and not get stuck with what has to be." Wow! I'm not sure how far back in the church's history one would have to go to find such qualities encouraged.

Seminarians today represent a mixed heritage of St. John Paul II, Pope Benedict XVI and Pope Francis. They admire what they call Francis' raw spirituality, his simplicity, and his hands-on, organic approach. It does seem that the Francis effect may be taking hold with an important group for the future of the church.

Francis tells church leaders to put their communities first, avoid clerical bureaucracy and evangelize with kindness. Current students for the priesthood tend to be with Francis on social justice issues, such as immigration, the preference for the poor, and the importance of the environment. Francis has encouraged seminarians to be less rigid, less focused on self, and discern "shades of gray."

So, on balance, it seems there is much to be encouraged about as a new direction for the priesthood takes shape. I would still like to see greater openness on several issues, including women in ministry, but one has to be excited about a return to Catholic social teachings, which seemed to be absent from too many in recent decades. A new sense of idealism and enthusiasm seems to be breaking out in young men entering the priesthood. It can't be all bad when a seminarian is saying, "How can we go out and get people to fall in love with Christ?"