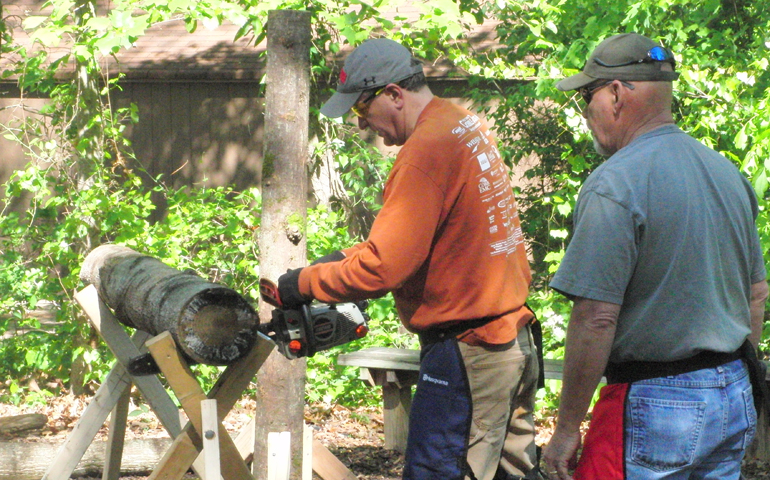 When a well-meaning team from the Catholic Church of St. Ann in Marietta, Ga., came to tornado-devastated Ringgold, Ga., in April 2011, they found the Baptists, Methodists and Seventh-day Adventists were already on hand, dispensing assistance in an organized, helpful manner. They found themselves dispensing water, and, at times, seeming to get in the way of the more organized efforts of local government and Protestant churches.

"Where are the Catholics?" they asked themselves.

They now have an answer to that question. In response, the parish formed the Disaster Relief Ministry, trained and ready to help wherever they can be of assistance when tragedy strikes around Georgia and beyond.

The program's website features two mottos: one, from Galatians 6.2, calling upon Christians to "bear one another's burdens." Another, from Pope Francis, proclaiming that the church needs to be a field hospital for the wounded.

There's been plenty of wounds to bind around Georgia over the past few years as the state has become a target for tornadoes, with locals arguing that the frequency and impact of the sudden storms appears to have intensified.

La Salette Fr. Thomas Reilly, pastor, appointed parishioner Pam Zander, a trained registered nurse, to lead the project. The project appears to be the only one of its kind by a Catholic parish in the country. Organizers hope it is not the last, and that their experience can be duplicated around the country.

While the spiritual works of mercy are valuable, it's important to know what you are doing, Zander told NCR. Simple bits of knowledge, such as how to cut off a gas line, can be invaluable in a natural disaster.

"We educated ourselves," she said. "There is more to this than just bringing food and water. We need to give true assistance and not be part of the disaster."

So the group organized itself around training, with the Federal Emergency Management Agency providing most of the materials. They organized teams, with about 250 parishioners stepping forward, some with emergency response experience. They received support from other local churches and the nearby synagogue.

At the time, they thought there would be ample time to organize. But what they found was that Mother Nature had other plans: a tornado hit in nearby East Cobb County in June 2013, and the group got its first real-world experience in disaster planning. The small tornado hit some 50 homes.

"We learned early on that people need water," said Zander, and, in the woodsy outer-Atlanta suburbs, they found that trees needed to be removed as well, particularly when they blocked the homes of seniors who had few resources to move them out of the way.

The group helps Catholic and non-Catholics, and the parish has sent out teams to assist flood victims in South Carolina as well as tornadoes in Oklahoma.

Reilly, a native New Englander, said the effort comes out of the Southern experience, where churches are expected to go beyond Sunday services.

Rusty Mawn, a parishioner involved in the effort, said on a promotional video that parishioners can now "wear the badge of Catholicity" by showing up when the Gospel imperative demands that they be active in the field hospital, supporting the wounded affected by natural disasters. The goal of the parish is that from now on, whenever disaster strikes in North Georgia and beyond, people will know where the Catholics are.