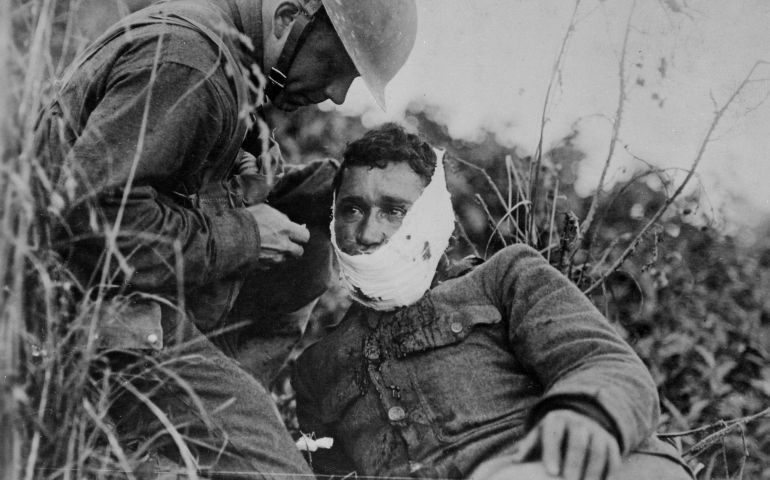 Writer-director Stephen Ives' three-part, six-hour documentary on how President Woodrow Wilson got the United States into the war "for which he was born" is indeed a master class on World War I history and how it paved the way for America today.

Narrated by Oliver Platt and other notable voices, including Campbell Scott and Blythe Danner, "The Great War" begins with America's pseudo neutrality that permitted U.S. corporations to provide food, supplies and munitions only to ally nations. It delves into what made Wilson tick as America's most religious president ever, his decision to go to war, how he created a propaganda machine to sell a war that was not based on defending the U.S. homeland but on spreading democracy and becoming a world leader — all based on ideology.

One of the most stunning moments comes when Wilson appoints Gen. John Pershing as commander of the American Expeditionary Forces. Wilson tells him that he knows he will do the right thing and win but offers nothing else, not even a concrete reason as to why he has decided to go to war. "There was no plan, no organization, no equipment and only 250 enlisted men" in the military on April 6, 1917, when America entered the war.

World War I saw poison gas used for the first time, eventually by both sides. The utter destructiveness of all war, especially the millions of military and civilians who died in World War I, those who were injured, who came home only to die of the flu they brought with them, is heartbreaking even from the distance of 100 years.

For a complicated war, this series frames a clear narrative that explores the U.S. perspective and involvement. This includes the dashed hopes of African-American soldiers who believed they were fighting for something meaningful, including their right to be citizens at home, but how well they were respected when Pershing sent their battalion, famed for its musical talent, to reinforce the French army. Fighting beside the French and their African and Arab soldiers gave the soldiers an idea of what life could be when the army was not segregated and people did respect one another despite the color of their skin — even though the French were not free of bias and racism.

Wilson's ideological arrogance was a problem during and after the war, something that few recognized at the time, Henry Cabot Lodge being the exception.

The president had no problem using nondemocratic means to achieve his stated end — "The world must be made safe for democracy." This was demonstrated by how he and his government used the draft to conscript unwilling troops. His PR man George Creel and his Committee on Public Information renamed the draft, calling it "Selective Service," to give the impression that men were volunteering, but the government would choose who would fight. On the first day of the draft, 680,000 men were "selected," their names pulled out of a big glass bowl.

Another way Wilson strong-armed the war effort was to achieve the passing of the Espionage Act, which was more about clamping down on anti-war and pacifist dissidents than as a means to deter spying. When Suffragettes refused to stop picketing in Washington for women's right to vote, they were pounded upon by crowds and thrown into prison.

The film does not spend a lot of time on the causes of World War I, though it sets up the first days of the war. It started on June 28, 1914, when Archduke Franz Ferdinand of the Austro-Hungarian Empire and his wife, Sophie, were assassinated in Sarajevo by a Serbian national, Gavrilo Princip. He acted for the Serbs who wanted control of part of the empire in order to form Yugoslavia. The Serbs refused an ultimatum from Austria-Hungary, which then declared war on Serbia. Germany sided with Austria-Hungary and Russia with Serbia.

Most scholars put the blame for World War I on Germany, though the film doesn't spend a lot of time on this. Germany and its allies wanted to preserve the old order (monarchies) on a continent of many countries overflowing with democratic movements. On Aug. 1, 2014, Germany declared war on Russia and, on Aug. 3, Germany and France declared war on each other. These declarations of war moved fighting from the Balkans into a full-scale war.

Germany began to invade France through Belgium while Britain came to the aid of the French, halting German progression along a 500-mile trench line that would become part of the Western Front. The United States claimed neutrality.

The United States entered the war after discovering that Germany was trying to recruit Japan and Mexico into declaring war on America. This followed Germany putting the U.S. on notice that any ships flying a flag of the allies would be torpedoed as it approached Great Britain.

Why did the U.S. enter the war? Wilson never made it clear in concrete terms but he sure knew how to sell the ideology of America's role on the world stage. He promoted himself as a moral leader in this war that turned "battles into slaughter and mass death."

Historian Jay Winter, who provides much of the commentary in the series, says, "Once you turn on brutal violence you can't just turn it off."

He also says, "Moral authority [which Wilson claimed over and over] gives the aura of sanctity to the one who proclaims the cause of war."

Alas, Wilson was not a saint. One of his cabinet members said of him that he had "great ideals but no principles." As the months went by, he had to make the war into something that mattered, leading to his 14 points and the attempt to form the League of Nations. Why the U.S. Congress did not vote for the League of Nations is terribly sad — and political.

The role of women and peace is highlighted (I am pretty sure the camera lingered for several seconds on a photo of a very young Dorothy Day; watch and let me know), as well as that of pacifists like Eugene Debs. One sign held up at one of his rallies said, "Workers fight the war; bosses reap the profits."

"The Great War" documentary series comes at a good time, when the world is broiling in deadly conflict and the use of poisonous gas on children and civilians is still perpetrated. A century after the U.S. entered World War I, it is a time for principles, wisdom and the relief of suffering, not ideals or emotions or retaliatory punishment.

The use of images and historical footage is up to PBS standards and the film compels one to watch. World War I, as the narration says, was a very contemporary war. This documentary series is thought-provoking and revealing and I hope everyone watches it.