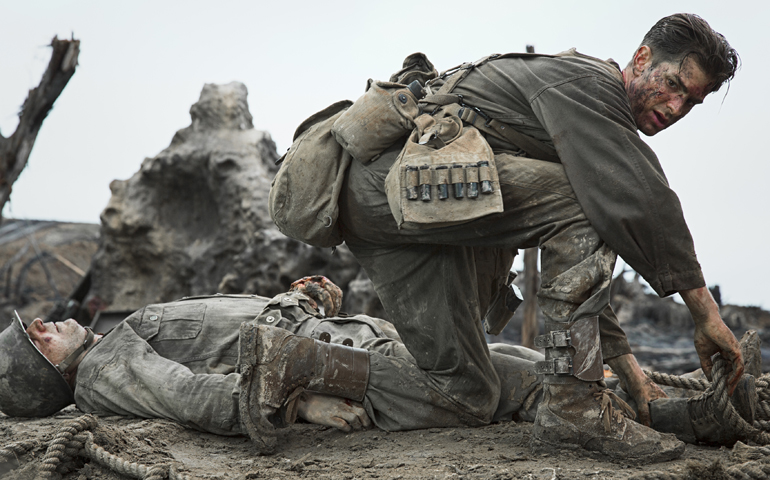 I had a dream about Mel Gibson recently. His face was very close to mine and his beard was gone. He looked very serious. I congratulated him on his new film "Hacksaw Ridge," his first in 10 years.

But he held up a print out of one of my reviews from his 2004 blockbuster "The Passion of the Christ." "But you didn't review this one very well," he said. I started to explain my issue with the excessive violence, when he held up another review, and another one. "Let me explain," I said. But he wouldn't. He wasn't happy.

That's all I remember and I hardly ever remember my dreams.

Gibson was less intense and milder a couple of weeks ago at the international press day for "Hacksaw Ridge" here in Los Angeles. There, among some of the key stars, producers, and writers — most from Australia — Gibson seemed content, though he couldn't stop grooming his beard. He told journalists that the story of Desmond Doss (1919-2006), played with depth and passion by Andrew Garfield, was one of unconditional love.

After seeing the film, which will be released Friday, I have to agree.

Desmond Doss (Darcy Bryce; Andrew Garfield) is a child of the Blue Ridge Mountains in Virginia who loves to roam the hills and climb the mountains with his brother Hal (Roman Guerriero; Nathaniel Buzolic). The family attends the Seventh-day Adventist Church. His father, Tom (Hugo Weaving) is a veteran of World War I who drinks and beats his wife (Rachel Griffiths). He probably suffered from shell shock or what we would now call PTSD.

Desmond is in his late teens when Tom assaults his wife again. He aims a gun at his father and almost pulls the trigger. Desmond can hardly believe he almost killed his father and resolves that day to abstain from violence and to never touch a gun again.

After the Japanese bomb Pearl Harbor in December 1941, most of the young men in the county volunteer for the army. Tom warns Desmond not to but the young man is a patriot and is determined to serve his country. He signs up as a conscientious objector and wants to serve as a medic. He is sent to Fort Jackson in South Carolina for training and assigned, by some error, to a combat unit. Before leaving he proposes to Dorothy Schutte (Teresa Palmer), a nurse he met at the town hospital.

Sergeant Howell (Vince Vaughn) trains the men and is tough on them because he wants them to be ready for the horrors of war. The other recruits and volunteers welcome Desmond at first but when he refuses to learn to fire a rifle, they beat him up because they fear he will not protect them in the foxholes of battle. He does not defend himself.

He is arrested and held for court martial. The officers in charge want him to quit and go home rather than risk military prison or even death for treason. It's a tense standoff but Desmond sticks to the conviction of his beliefs. He and Dorothy marry before the unit is shipped to the Pacific. She gives him a small Bible that he treasures.

The battle for Okinawa is fully engaged when Desmond's unit lands on the beach. Men are descending by a rope grid from the 400-foot high escarpment where the Japanese army is entrenched above. The next day Desmond's unit climbs the cliff to engage in one of the bloodiest battles of the war. The fighting is terrible.

Desmond, who is not as robust as Captain Glover (Sam Worthington) or his buddies Smitty (Luke Bracey) and Hollywood (Harry Greenwood), runs from man to man who are injured or dying. He does what he can to stabilize them.

As the fighting ends for the day the men retreat down the cliff but Desmond hides and protects the wounded from the Japanese. Over the course of the night he carries 75 men, including Japanese soldiers, to the cliff and lets them down using ropes. He refuses to stop. He prays that God will let him save one more, just one more. Desmond's actions would be inconceivable and unbelievable if they were not true.

For such a compelling true story of the power of moral courage it is remarkable that it has taken so long for it to come to the big screen, though documentaries exist. Producer Bill Mechanic became involved in the project early on after producer Terry Benedict acquired rights to the story. Beginning in 2002, Mechanic wanted Gibson to direct because of how well he directed the 1995 Oscar-winning "Braveheart." Mechanic sent him the script numerous times but it wasn't until 2014 that Gibson finally read it and committed to the film.

Mechanic told the press that "the film spent years in Hollywood hell" because studios hesitated to back a film that was about religion, had a two-act structure (before Okinawa and Okinawa), and is about World War II. So, the producers made an independent film over 45 days with the freedom to make the film they wanted — and then find a distributor.

One of greatest challenges that remained, however, was how to externalize the shy Desmond Doss' inner life and struggles. The excellent script by Robert Schenkkan and Andrew Knight gave impetus to Garfield's portrayal, who spent three months visiting Doss' birthplace, handling his tools, seeing where he lived out his life with Dorothy in Tennessee after the war, and reading everything there was about him. Garfield internalized Desmond and what we get is an outstanding portrayal of an earnest, humble, sweet, vulnerable, committed and brave young man who loved his neighbor.

When asked how the film impressed him on the level of faith, Gibson admitted that though he wasn't such a great example, the story of Desmond's love for humanity, no matter your faith or no faith, is heroic and moving. Garfield spoke about the film's image of masculinity, that Desmond shows it is not about aggression or dominance but love and self-sacrifice.

The biggest problem with Christian films is that they lead with the message rather than the story. Here, the filmmakers did it right. "Hacksaw Ridge" leads with the amazing story of Desmond Doss and they trust the audience to make and find meaning. The film, despite the violence, reaches the level of art.

But for all the heroism and love in the film, it remains a paradox. Desmond had no problem with serving his country but he would not fight or touch a rifle. He was as patriotic as the next man. As a medic, he was there to aid men broken by battle. Then Gibson takes over and we get a close-up, personal view of intense gore, slaughter and relentless fighting, killing and injury as well as the peaceful man who cared for the fallen. I believe the filmmakers could have lost at least 10 minutes of the footage and we would be horrified enough by violence.

So, Mel, here I am again asking you to understand that we, the audience, get it. We get the violence, the horror and the heroism. You don't have to hammer home the gore in every film you make. Pacifism and war are actually not in conflict in "Hacksaw Ridge." War happens. You serve. You just refuse to fight.

"Hacksaw Ridge" is about the codes we live by. Desmond Doss lived by his code, the military lives by its code, nations go to war because codes have been offended or broken. Cultural codes are rife with meaning. There is one scene toward the end of the battle when the Japanese commander prepares ceremoniously for his throat to be cut by an officer because he has failed in his duty to win.

Our current American culture presents another paradox: differing religious moral codes that call themselves Christian. Publicists, whose target audience is the evangelical community, organized the screening I attended. Evangelicals were in attendance as well as veterans. A former military chaplain was present in case any of the vets needed to talk.

The publicist triumphantly announced that due to negative feedback about the film's language from test audiences in the evangelical community the filmmakers edited out every single bad word in the film. There was a small reaction rather than cheers to this statement because I think the veterans knew this was ridiculous or she embarrassed them because they actually used such language. It was such a surreal, weird moment for me. I wanted to tell her: You can look at horrific battle scenes, limbs being torn off, heads exploding, blood and extreme suffering everywhere — and an occasional swear word offends you? Don't you think that your value system is a tad skewed if you believe that God is more offended by bad words uttered in the worst of circumstances than reality-defying violence and war?

The militarization and politicization of religion in the U.S. culture could also have something to do with justifying the extreme portrayal of violence and killing with guns and knives and placing that in one category, and putting offensive language in another. The perceived lack of moral integration, or confusion about moral codes and God's view and expectations of humanity as assumed and presented by the publicist was ridiculous, for want of a better word. War and violence are offensive. Swearing would be expected in war or traumatic situations. These are human beings, men, fighting, dying, and suffering, not a host of angels. If God is displeased about anything in war, bad words are the least of it.

After 10 years, "Hacksaw Ridge" is a fine film for you to bring us Mel. It's the violence that I am always going to complain about. Therefore, I am going to assume the next time we meet in my subconscious, you'll bring up my review of "Hacksaw Ridge" to haunt me.