A haven for the poor in Margaritaville 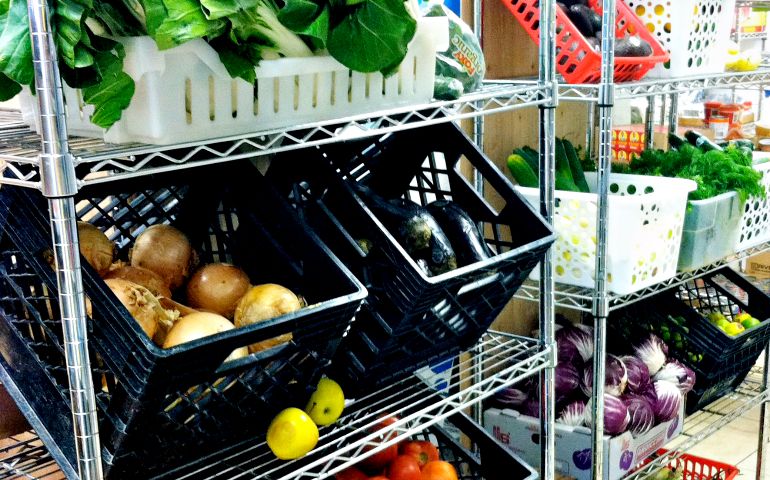 Fresh produce at St. Mary Star of the Sea Foundation in Key West, Fla. (Courtesy of Star of the Sea Outreach Mission)
This article appears in the The Field Hospital feature series. View the full series.

Key West is Jimmy Buffet's Margaritaville, a speck on the map lurching into the Atlantic and the Gulf of Mexico where tourists go to unwind and escape winter's bitter northern winds. Its symbol is a hammock and a cold drink.

But there's another side to Key West. The local Catholic parish, the Basilica of St. Mary Star of the Sea, has set up its own field hospital in an effort to address the needs of the region's poor. Key West is part of a county that ranks near the top in income disparity in the U.S.

In a place that practically invented leisure, there's a whole army of workers who make that lifestyle possible, cleaning the hotel rooms, maintaining the lawns for winter homes, and working the tourist and fishing boats. And they are hurting, says Tom Callahan, a volunteer and executive director of the Star of the Sea Foundation, begun in 2006.

That organization, begun through the parish, is now a separate nonprofit entity on church property that provides food and other assistance to the poor.

"The dichotomy between the haves and the have-nots is severe in Monroe County," said Callahan, a former Maryland tax and business attorney who credits his lawyerly success with his opportunity to volunteer. Monroe County includes the entire Florida Keys, an archipelago that stretches some 100 miles from Key Largo in the north to Key West, the one of the southernmost points in the United States, famously 90 miles from Cuba.

A recent United Way survey indicated that more than half the families in the county are struggling to make ends meet. Key West, always attractive to vacationers, has been gentrified, making rents out of reach for many of its workers.

"There's really nothing left in the stock of affordable housing. It's a perfect storm. People are really struggling to stay afloat," Callahan told NCR.

The Star of the Sea Foundation runs a food pantry twice the size of the largest one in Miami, even though the Keys only has about 80,000 residents.

"We're in the business of homeless protection," said Callahan, noting that those who use the food pantry frequently go hungry because they have trouble paying their rent.

Fr. John Baker, pastor of Star of the Sea, said the foundation is part of the parish's long tradition. The former convent it uses was once literally a field hospital, as diseased and battle-scarred soldiers were housed there in the early part of the 20th century after the Spanish-American War.

Now, in the next century, the building has been redone with similar ideals in mind. Becoming a field hospital, in the way Pope Francis described the role of the church as reaching out to the vulnerable, "is our purpose," said Baker.

Through the donation of Harold Murphy and Fred Klaus, two deceased parishioners, the convent was renovated and rechristened the Klaus Murphy Center. It was dedicated by Miami Archbishop Thomas Wenski last September.

Last year, the center provided about 146,000 pounds of food each month through a food distribution network that extended to Key Largo's St. Justin the Martyr Church, some 97 miles north of Key West; it served meals for 450 children every day; and its volunteers put in some 18,000 hours, the equivalent of 450 people working a 40-hour week.

The Star of the Sea Foundation's $4 million annual budget, garnered through grants from governments, foundations and individuals, is still not enough to meet the needs, said Callahan. He would like to see more of the wealthy of the area step up and help the needy with both their time and treasure.

Some of its benefactors realize the value of the center in keeping the social equilibrium of the Keys intact. One noted her gratitude to the workers who maintain the homes and staff the resorts here.

"We know if we don't help the people survive, they will have to leave here," she told him. Without them, Key West, the Margaritaville haven, could not exist.

Parish | A haven for the poor in Margaritaville