A film about the Holocaust – produced by a Jesuit priest and directed by his son – finds itself on a possible path to the Academy Awards. 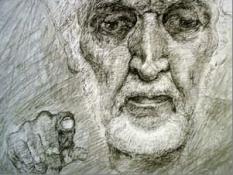 The 37-minute documentary is called “The Labyrinth,” and tells the story of Marian Kolodziej, a Polish Catholic resistance fighter during World War II who survived more than five years in Auschwitz.

For five decades, Kolodziej – prisoner number 432 – kept silent about his years inside the death camp. He became a set designer for Polish film and theatre, he married, and – like so many survivors -- tried to somehow stitch together a normal life.

Then in 1993, he suffered a severe stroke. During his rehabilitation, he quietly asked for a pencil – and immediately a flood of images from Auschwitz poured out onto paper. Kolodziej soon had more than 300 drawings, all depicting the camps in nightmarish and surreal detail. A church in Poland gave him its basement as a workspace and gallery – with his wife, he set up his enormous drawings in a place he came to call his Labyrinth.

Three years ago, his work was discovered by Jesuit Father Ron Schmidt, who came to Auschwitz to produce a documentary on an annual interfaith conference held there. He interviewed Kolodziej, then in decline, and flew his son, director Jason Schmidt, to Poland. Work on their film began quickly.

Fr. Schmidt and his son (Ron became a Jesuit after his wife passed away more than a decade ago) are part of Hollywood royalty. Ron’s father was the Oscar-nominated Arthur P. Schmidt, who edited the classics Sunset Boulevard and Some Like it Hot. Ron’s brother, two-time Oscar winner Arthur Schmidt, edited Forrest Gump and Who Framed Roger Rabbit? He also worked on editing “The Labyrinth.”

Friends in the film industry who saw an early cut of the project told Fr. Ron he had a possible Oscar nominee on his hands. But the trick there was exposure. To qualify for nomination, films need to be shown in New York and Los Angeles theatres for at least five days – a tall, expensive order for documentary shorts produced on little more than hope and a prayer.

But sometimes that is enough – each year, the International Documentary Association sponsors the DocuWeeks showcase, just to make sure that worthy documentary features and shorts get the exposure they need for a shot at Oscar. Competition is fierce – only five short films are selected from entries submitted worldwide.

“The Labyrinth” will be one of them. It premieres on Friday, August 13th in New York and Los Angeles, and buzz has already begun to build. An Oscar nomination remains a mysterious, distant goal – but this powerful short film has already achieved more than its makers hoped and prayed for.

Marian Kolodziej died on October 13, 2009, shortly after main shooting on the documentary wrapped. But his work will now been seen by more people than he could have imagined -- thanks to a Jesuit priest and his son, Kolodziej’s drawings will achieve a life beyond their creator and the death camps that spawned them.

Follow this link to view a three-minute trailer of The Labyrinth.

Ohio parishioner on new missal: 'If it ain't broke, don't fix it'