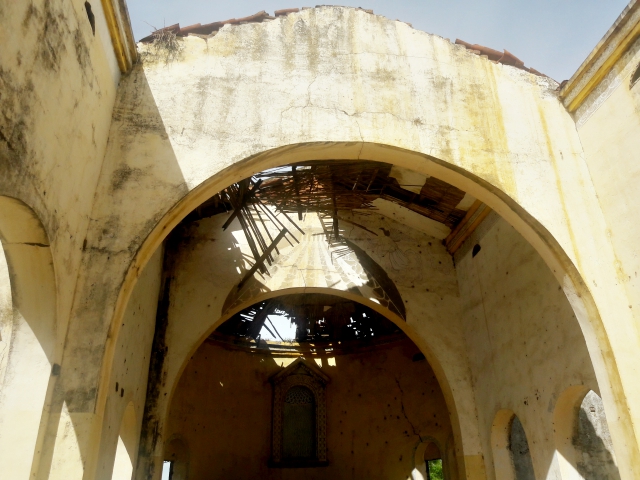 A bombed-out church adjoining the Good Shepherd Peace Center about 10 miles southwest of Juba, South Sudan, serves as a sober reminder of the country’s legacy of war. (NCR photo/Chris Herlinger)

The news earlier this week that the Vatican put plans for Pope Francis to visit South Sudan on indefinite hold came as no surprise to one of the country's most prominent Catholic bishops.

"From the onset, it is clear that the police we have in South Sudan don't have the capabilities to secure the historic papal visit," Bishop Santo Loku Pio Doggale told me in an email just as I had completed a two-week reporting assignment in the war-torn country and just two days after I had interviewed the auxiliary bishop in his offices in the capital of Juba.

"For me it is not a surprise at all," Doggale said of the Vatican announcement.

The Vatican did not outright cancel a visit, but said a trip would not happen this year. As my NCR colleague Josh McElwee reported May 30, security concerns apparently tipped the balance against a papal visit to South Sudan, which had been eyed, tentatively, for October.

A visit by Francis would have been welcomed by the religious, both men and women, I met during my stay in South Sudan. They are working in some of the most difficult and challenging conditions on earth. A papal visit — even if, as the rumors had it, the visit would last for only a day — would have given them, and South Sudan's large Catholic population, a much-needed lift and boost.

"I felt really my hopes shattered and maybe the hopes of many of our people who would have wanted him [the pope] to come and bless our land with a message of peace," Kenyan Sr. Anne Kiragu, a superior of a small Daughters of St. Paul community in Juba, wrote in an email June 1.

"The pastor should come where the flock is," Fr. Raimundo Nonato Rocha dos Santos, a Brazilian Comboni missionary, told me when I interviewed him two weeks ago. Rocha, who enthusiastically endorsed the idea of a papal visit, said it would "be meaningful and give people hope."

"It would be good to come, and call the attention of the world to South Sudan," Rocha said, and perhaps help revive a moribund peace process between the government of Salva Kiir Mayardit and its political opponents.

However, Doggale, the auxiliary bishop of Juba, and an outspoken critic of Kiir's government, said a papal visit might have used by the government as tacit support at a time when it is being criticized by Doggale and others for alleged human rights abuses and during a time when "we have a divided population."

Still, when I spoke to the bishop in person on May 29, Doggale acknowledged that a visit by Francis "could send a strong message to the warring parties, that the church is still here, witnessing, and we still have an opportunity to broker peace, rebuild our lives and bring us together."

He added: "It could send a very strong message that we need peace more urgently than ever."

In his email message, the bishop also told me that Sudan's bishops had been divided on the need for a visit now, given the extreme hardships facing South Sudan, which include not only civil war, internal conflict and a worsening humanitarian situation but also a poor economy that is spiraling downward.

"The logistical arrangements that would need much cash would have been a big burden to the already starving population in an ailing economy," Doggale said.

"The Holy Spirit has guided the pope," the bishop said of the decision to postpone a visit to South Sudan. "We are happy to wait for another chance [at a papal visit]."

The issue of South Sudan's insecurity came up often when I interviewed Doggale. As one small example, we both mentioned the Good Shepherd Peace Center, a new facility for use by church personnel located about 10 miles southwest of Juba near the Kit River.

I visited the center for an afternoon and it's a lovely, handsome place — billing itself as a "center for human, pastoral and spiritual formation, peace-building and trauma healing." On the day I was there, a group of Catholic sisters was enrolled in a management training course put on by the African Sisters Education Collaborative. The center is sponsored by the Religious Superiors Association of South Sudan.

Yet the unpaved road out to the center is still considered risky — I heard about robberies and abductions on the roadway. And given the insecurity, the tranquility of the center's rural surroundings feels not so much peaceful as lonely and poignant.

The area near the Kit River had been the site of intense fighting between South Sudanese rebels and Sudanese troops during the long years of war for South Sudanese independence. (South Sudan won its independence from Sudan in 2011.) A bombed-out church, not yet restored and adjoining the center, serves as a sober reminder of the country's legacy of war.

To get into the center's entrance, you pass armed guards — not an unusual sight in South Sudan, certainly, but still a sad reminder of the country's reality right now.

One center employee told me the center can feel a bit caged.

"We need the guards, and it's a contradiction — a peace center needing guards," the employee told me. "But that's the country."

Doggale shook his head when I recounted my experience at the center. "There's no guarantee of safety," he said of the situation in South Sudan — a fact reconfirmed this week by the pope's decision to postpone his visit.

In an email from Rome, where he is on leave, Rocha said he was "feeling disappointed for I had hopes that he [Pope Francis] would visit South Sudan this year."

Rocha also said that the subject of South Sudan came up when he and other Combonis met the pope during a general audience on May 31. Rocha said, "As he approached us wearing a large smile he [the pope] said: 'Bravi, Comboniani! Bravi, Comboniani!' ['Well done, Comboni missionaries!']