A 'how to' for Year of Faith plenary indulgences 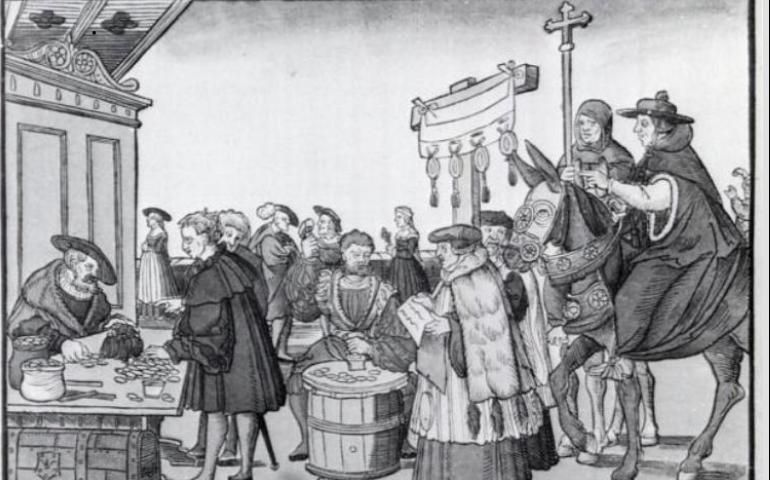 The sale of indulgences shown in "A Question to a Mintmaker," woodcut by Jörg Breu the Elder of Augsburg, circa 1530.

You might have read that Catholics who participate in events connected with the upcoming Year of Faith can receive a special plenary indulgence. I must admit the idea of appointed clerics having the authority to grant indulgences carries a bad taste.  I cannot help but connect the whole notion of indulgences with old theologies and with the funding of the building of St. Peter’s basilica. The sales of indulgences were an abusive and lucrative practice at the time and led to an uprising, headed by Martin Luther of Germany, resulting in the Reformation and a split in the church.But they have continued as part of the Catholic tradition – though there has been little emphasis on indulgences in recent decades. This, like many other aspects of our traditional faith, is getting more attention. Notably, Pope Benedict XVI this week authorized the granting of a plenary indulgence – officially the remission of the temporal punishment a person is due for sins that have been forgiven – for the performing of certain pious acts related to the Year of Faith, which begins this month.I thought it would be instructive to list the necessary requirements for penitents who wish to gain a plenary indulgence: Penitents can gain one:

An additional note: Faithful who, due to illness or other legitimate cause, are unable to leave their place of adobe, may still obtain a Plenary Indulgence "if, united in spirit and thought with other faithful, and especially at the times when the words of the Supreme Pontiff and diocesan bishops are transmitted by television or radio, they recite ... the Our Father, the Profession of Faith in any legitimate form, and other prayers that concord with the objectives of the Year of Faith, offering up the suffering and discomfort of their lives".

Vatican | A 'how to' for Year of Faith plenary indulgences

Use Gospel as a guide, not an ideology, pope tells Claretian Missionaries

Pope's quotes: Do not point the finger