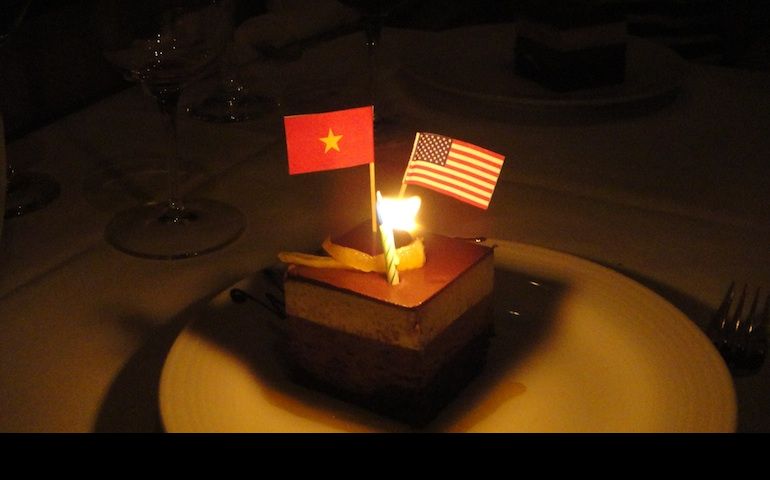 The history of Catholicism in Vietnam is complex. The fruits of the faith came to Vietnam in a period of colonial conquest. Centuries later, some Catholics feel they need to go the extra mile to prove their nationalist pride.

For this reason the best Catholic enterprises today in Communist Vietnam happen at the intersection of social justice and national development, a place with men and women of faith can work freely with nationalists and others of varied ideologies and religious beliefs.

Giulietti gets this and so do his supporters at Loyola University Chicago where faith fuels various education programs including the Vietnam project.  Jesuits have always been at the forefront of understanding local culture and circumstances, and opportunities and challenges these occasion.

The Loyola Vietnam Center was formed several years back to provide expertise to Vietnamese in the areas of advanced nursing skills, medical and surgical education and small business development. It is especially important as it is the first American educational institution of any sort to receive a license from Hanoi’s Ministry of Education and Training.

Patterned after Jesuit institutes in Rome and Beijing, the Loyola Vietnam Center represents the latest effort to spread Ignatian spirituality in colors that match the possibilities and needs of a quickly growing nation.

The Loyola Vietnam Center has grown out of the visions of Giulietti; Jesuit Fr. Michael J. Garanzini, president of Loyola University Chicago; and Patrick Boyle, associate provost at Loyola Chicago. All are notably global thinkers who see the value in providing value-oriented education, in forming global leaders.

I’ve written about this program before.

The other day I received an update report from Giulietti.  Let me share with you an email he sent me. He writes:

It is with joy and satisfaction that I share with you the positive outcomes of the University Management Training Program (UMT) held at Loyola University Chicago for 10 Vietnamese university leaders from Saturday, Sept. 29 to Oct. 6.  Since the UMT participants traveled on long flights from Vietnam, the first two days were set aside for rest and orientation.

The group enjoyed a boat tour thru the Chicago River to enjoy the magnificent architecture of Chicago.  We did so on a pristine and blue sky Sunday with a knowledgeable guide.  The UMT participants - seven men and three women - traveled to Loyola Chicago seeking to learn how to organize their universities more productively in a rapidly changing world. It is not possible to share all the events of the UMT.  It is important to state that from the start we sought to communicate the critical importance of designing a viable mission statement for any university, one that guides its direction.

The design process must involve input from all sectors.  Loyola Chicago's top academic officer, Provost John Perissero, framed the nature of mission and how that mission forms the basis for curriculum development, research, student life and services across the university.  Good leadership was a theme throughout the sessions.  There were 11 working session during the week.  Speakers were faculty or top administrators at Loyola Chicago.

They approached their topics via dialogue and mutual exploration.  Copies of power-point presentations were provided for all UMT members.   In keeping with the Jesuit tradition of reflection on experiences, I lead the group thru a daily debriefing from 4 to 4:45 pm.  Their feedback was quite moving and revealed their desire for change while cognizant of the limitations they experience within a political regime that controls much of Vietnamese higher education.  From these reflection sessions and before departure Chicago, the participants selected the three main areas for future work back in Vietnam.

These are: design of a viable mission statement with input from all sections, faculty development, and curriculum design beneficial for students and reflecting university mission.   Being outside of Vietnam allowed the UMT participants to meet and speak freely without the annoyance of continual phone calls.  Evening dinners provided relaxation and further opportunities to review the day.  To a person, participants expressed profound gratitude for the UMT experience.  The ten decided to form a UMT Alumni Group in Vietnam.  I plan to use the alumni to identify future UMT participants with similar openness and willingness to change as this group expressed.

A final and humorous note. Fr. Michael Garanzini, SJ, Loyola Chicago's President, hosted a luncheon for us on Wednesday, October 3rd.  Our Vietnamese guests found Michael articulate and very friendly.  He sat at table with them, something a Vietnamese president would normally never do.  Michael spoke about the importance of a mission that is practical, has wide buy-in by university stakeholders, and the need to "tweak" that mission as needed.  They were fascinated that a university president lives in a student residence, is a Catholic and even a Jesuit priest.  Michael kept referring to me as Fr. Giulietti, so it was at lunch when most of the group discovered my own identity.  Before lunch I was "Professor Julio" or just "Julio".  Now I am "Father Professor Julio", or "Doctor Father Julio", or "Julio Father Professor!"  Let's see what actually sticks.  Just "Julio" I hope!

Is she or isn't she Catholic?

Surviving the 'next world crisis'