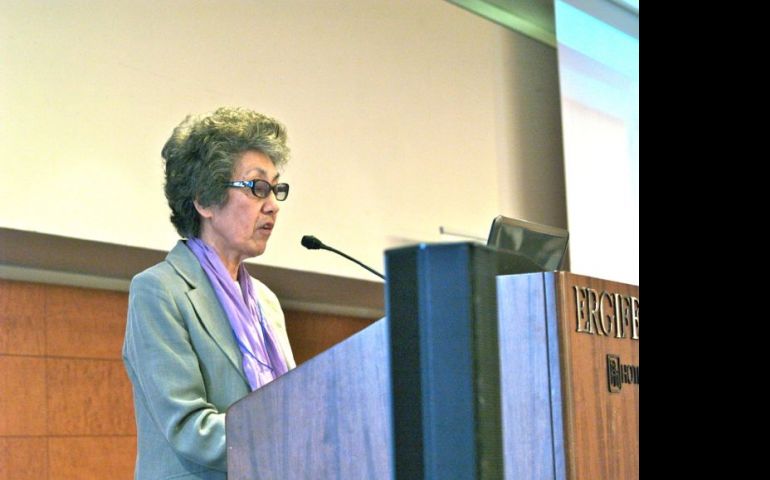 She spoke Sunday before a gathering of some 800 women at the triennial assembly of the International Union of Superiors General (UISG). Hirota has been a long time member of the UISG’s Peace, Justice and Integrity of Creation board (JPIC).

Peace and justice work is not one of many things we do, but “it is a way to live the consecrated life,” she told the women.

It is important and necessary, she said, that the peace and justice vision and commitment is owned by all the members of the congregation “and that an adequate structure be set up that would enable and facilitate living that commitment.”

Pope Francis has made it clear, she went on, that we need to integrate JPIC into the overall life and mission of the entire congregation, including its government and finances. This means that the JPIC promoters need to work in close coordination with the leadership team.

Recognizing a growing sense of solidarity among women religious around the world, a solidarity stemming from shared mission and increased global communications, Hirota, a native of Japan, said: “This UISG assembly is a concrete expression of a global network that is capable of promoting and enabling a globalization of justice and solidarity to prioritize life of the entire creation and dignity of every single human being on earth.”

Hirota, who has lived in Rome since 1997, said she has seen a growth in the integration of peace and justice work into the women’s communities. In the 1970s and 1980s, she said, peace work was often viewed as the work of only one or two women within a community. They were then viewed as “activists,” she said, “sisters who were often absent from their communities’ prayers because they were participating in marches, demonstrations or other radical political actions.”

By contrast, she said, by the late 1990s these so-called “activists” were integral peace and justice promoters within their congregations, some based in Rome. Peace and Justice work, she continued, was by then being seen as the way to live the congregational charism in the world. “This was a positive and healthy development.”

In finishing her remarks she cited past Leadership Conference of Women Religious president Sister Pat Farrell who in her presidential address at the organization’s annual meeting last August suggested six tools for navigating the shifts occurring in the world and church: contemplation, use of the prophetic voice, solidarity with the marginalized, community, nonviolent responses, and the capacity to live in joyful hope.

Hirota also quoted the late Archbishop of Recife, Brazil, Helder Camara who one said: “If someone dreams alone, then this is only a dream. If many dream together, then this is the beginning of a new reality.”

Concluding Hirota called on the women to “dream together” so that “we can be the beginning of a new reality in the world, and especially in our church.”

Fox is NCR publisher. He can be followed on Twitter @NCRTomFox.

In Case He Hadn't Been Perfectly Clear

Presentation Sisters and their commitment to the poor