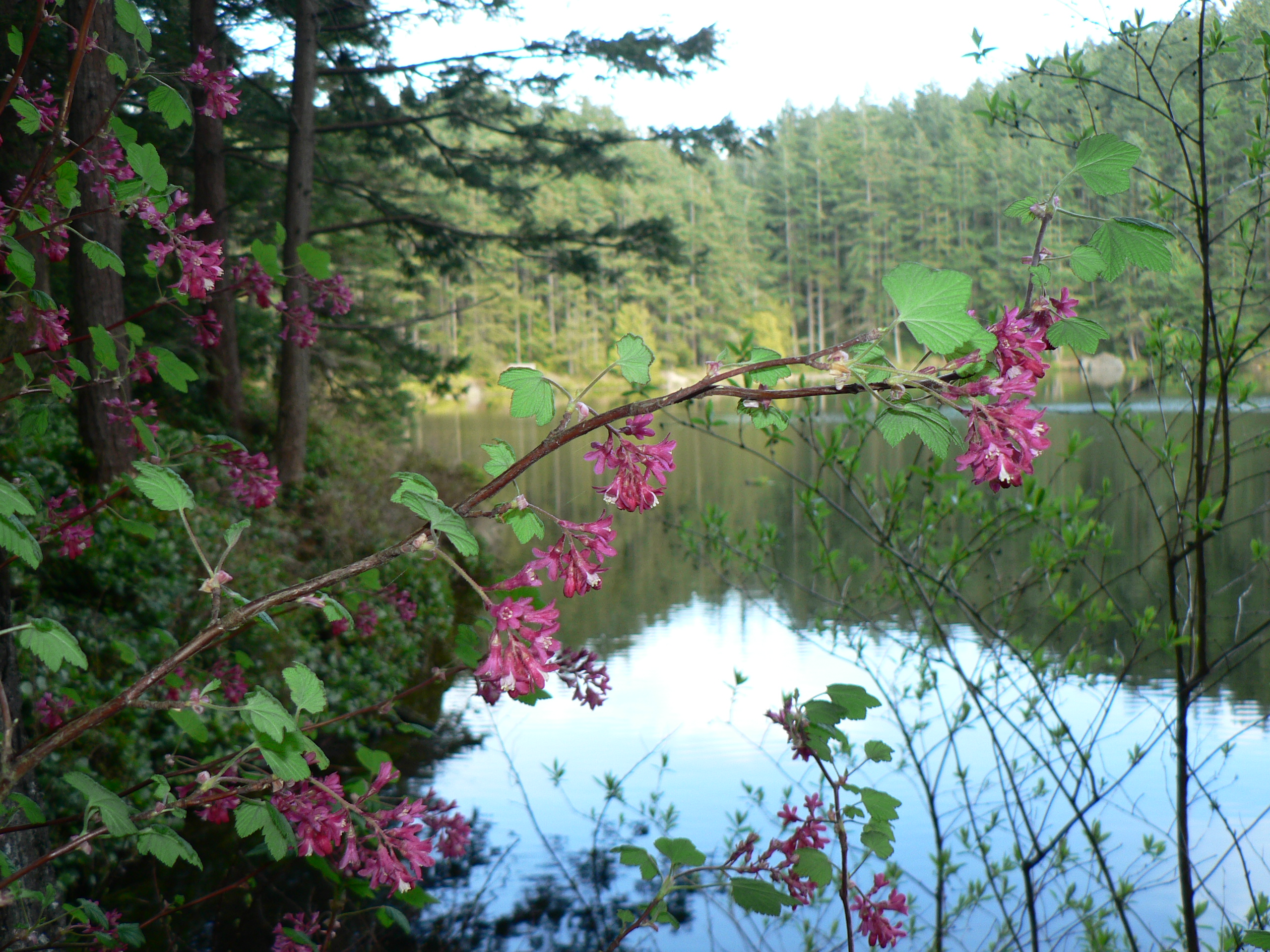 I admit that I had never heard of St. Adjutor until late August. I felt compelled to Google the Patron Saint of Swimmers after we got home from our kayak adventure at nearby Little Cranberry Lake. I wanted to know to whom I should send my big cosmic "Thank You" note for the straight out miracle that happened for our adult disabled son, Nick (27), in that shady deep water.

Because I have recently started working from home, I offered to watch my girlfriend Shelley's 7-year-old son, Hunter. His YMCA day-camp shuts down for the last two weeks of every summer, to give its beleaguered staff 14 days of much-needed rest before the kids come pouring back into before- and after-school care.

I managed to find enough for Hunter to do on Monday (cartoons in the morning, Shaun the Sheep matinee in the afternoon) and Tuesday (cartoons in the morning, then treasure-hunting in the three thrift shops in our small town of Anacortes after lunch). Hunter was pleased with his find of a battered but still usable Monster Truck, and I was delighted with the 75-cent price.

By Tuesday evening, I was feeling my age and plain out of ideas about what to do on Wednesday. In a moment of inspiration, I called our daughter-in-law Tanya and invited her to bring our grandkids Emmaly (10) and Ethan (8) up for a surprise visit with Hunter. Happily, she agreed.

Wednesday morning, I prepared six sack lunches -- peanut butter and jelly sandwiches for the boys, tuna fish for the rest of us -- and daydreamed about a nice quiet picnic at Washington Park. Located on the rocky wooded point at the west end of Fidalgo Island, Wash., this park has plenty to keep kids busy: a gravelly beach littered with flat skipping rocks, a wide grassy area for chasing each other, a couple of jungle gyms, and big boulders on which to climb and from which to leap. There are port-a-potties near the playground, but for us more particular folks, there are real bathrooms with real toilets, even.

My hope was that Hunter and Ethan would get busy just being boys, Emmaly would engage Nick somehow, Tanya would take care of herself, and I could secretly doze on our blanket. Nice idea.

Instead, Tanya brought with them her newly purchased 12-foot kayak. We all pitched in, getting it and its gear out of their pickup truck and down to the gravelly beach alongside the boat launch. Emmaly and Ethan vied for the front of the line for the first ever ride, Hunter pouted that Ethan's attention was not on him, and Nick lurched around the perimeter, clearly feeling too big and wanting his turn.

First with Emmaly and then Ethan, Tanya rowed out several hundred yards into the cove, then back. When she pulled the kayak up onto the beach, she hollered over to me that she felt intimidated. The wakes from passing speed boats, plus high tide flooding in, made the water too choppy and the kayak too unsteady. She wanted someplace smooth and quiet to get used to the craft. She asked me, "What do you think about taking the kids up to Cranberry Lake?"

The angry August yellow jackets were circling closer and closer to our tuna fish-smelling blanket, and Hunter and Nick were both sulking, so I readily agreed. We packed up and I followed Tanya's truck up the hill to Cranberry Lake. Tanya and I pulled the kayak from the dirt parking area to the shaded shore. When we launched the boat, a large dark rock turned out to be a bullfrog, and startled us all. Hunter and Ethan pretended not to be scared of course, then proceeded to try to kill it. I warned them off.

Tanya and Emmaly floated off in the kayak, and Ethan and Hunter splashed over to the sunny side of the lake. Emmaly joined them there, while Tanya worked a while with the kayak on her own, getting to know it.

Nick stood alone on the shady side of the lake, watching the kids laugh and splash each other and swim around. They all had life jackets on, but I didn't have one large enough for Nick. At 5'9" and 190 pounds, he looks just like a man. Developmentally, he is about 7 years old. From the wood foot bridge, I saw Nick watching the kids, and felt his longing.

I yelled across: "Yo, Nick, why don't you walk over here with me?" but before I finished my sentence, I saw Nick lunge forward, belly flopping into the water. He dog-paddled towards the kids, who were about a football field distance away.

Now when Nick was 9, I taught him to swim, and he did so well with freestyle, he brought home some gold medals from the Special Olympics finals at the Goodwill Games pool down in Federal Way, Wash. But after that event, each time I tried to take him swimming, he refused. I never knew why. And I could never get him back in the pool.

He pawed the surface, keeping his head above the water. He had some initial momentum, then he started to churn the water and make moans and grunts of distress, like a cow struggling in the muck.

I held my breath, and thought: "Oh, God. Here we go. I am gonna need your help here. Looks like I am getting wet."

I am a strong swimmer -- and had lifeguard training as a teenager -- but that was a long time ago.

I was scared. But I could feel the adrenaline starting to pump. It tasted like tin foil in the back of my throat. I looked around for help. Tanya was at the other end of the lake in her kayak, and the kids were all watching Nick, open-mouthed and silent.

I pulled my cell phone and car keys out of my shorts pockets, letting them drop into the tall grass next to me. Nick was still grunting, not moving much, and I watched his face, to make sure he wasn't gulping any water. I moved down the bank, kicked off my sneakers, my eyes always on his face. To the edge of the water, then into the water, watching. I had decided to go … right … now … when there was a sudden forward momentum from Nick.

Nick covered the remaining distance quickly. The three kids were yelling at him, their hands cupped around their mouths: "Stand up, Nick! It is shallow here! It isn't deep!"

When he pulled his head up enough to hear them, he planted his feet, and stood up. He punched his hands up into the air, a living "V" of victory.

He turned, found me, and yelled: "Mom! Mom! I got my swimming back!"

I yelled: "Way to go, Nick!" and turned my face quickly, so he didn't see me crying. I found my shoes, my keys, and my phone, through a blur of hot tears.

I took photos of Nick playing with the three kids. Splashing each other. Flopping around and falling backwards. He was now completely confident, my big fish in the water. I laughed and did my best not to cry again.

When Tanya returned with the kayak, the kids floated over to her at the shady end in their life vests. Nick put his head down, and swam across to them with long, smooth strokes. Everyone whooped for him when he got there. He jumped up, his legs wide, his chest puffed out.

He turned and found me again. He yelled: "See, Mom? I still got it!"

I walked back around the path to them, and Tanya was helping Nick into the kayak. He wanted to do it on his own, he had told her. She looked up at me for confirmation. I nodded. We wouldn't let him get very far, but he was so full of joy, there was no way I was going to say no.

Out a short distance from us, Nick mostly paddled the kayak in circles. Tanya and the kids shouted directions at him: "Just use the left side, Nick! No, the LEFT side!" Slowly he made his way back to us. He climbed out, holding the boat still so Ethan and Hunter could climb in. His smile was wide. He looked taller.

While the boys floated around for a few minutes -- with Tanya holding onto the tether -- Emmaly and I stood together and watched.

She looked up at me and said: "Grandma, I was scared. When Nick first jumped in the water, I was really scared."

I put my hand on her shoulder, and said: "I was really scared, too. I was just about to go get him, and that really scared me. Nick is way bigger than I am."

Her blue eyes looked serious: "Yeah. I saw that."

I smiled: "Good thing he remembered how to swim, huh?"

It was nearing the time I had promised to get Hunter back to his mom's office, so I called to Tanya that it was time to go. She pulled the kayak up to the shallowest spot, and helped Hunter out of the boat. Nick handed him a towel to wrap around himself for the ride back to town.

We three were quiet on the 10-minute drive into downtown Anacortes. I saw in the rearview mirror that Hunter's eyes were heavy. I knew he would sleep well tonight. Nick watched the traffic pass us, his face calm and self-possessed. As for me, I kept brushing away mental flashes of what could have happened, vignettes of horror and grief that we had been spared, but still haunted me.

To God, to Nick's and my Guardian Angels, to the Patron Saint of Swimmers, whoever he was, I whispered: "Thank you."

Nick smiled: "You are welcome."