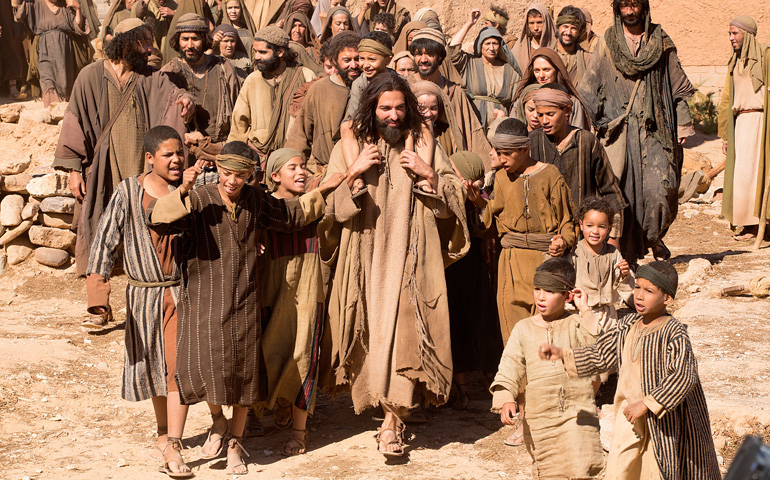 "Killing Jesus" airs Sunday on the National Geographic Channel. It is written by Oscar- and Emmy-winner Walon Green and based on Fox News pundit Bill O'Reilly and co-author Martin Dugard's 2013 bestseller of the same title.

The title is somewhat misleading, however. By the title, you might expect something like Jim Bishop's 1957 book and 1980 TV movie The Day Christ Died. Instead, this television movie (like the book on which it is based) covers the entire the life of Jesus while leaving out, or rearranging, elements we might expect to see in a certain order, and time-wise making short work of actual the death of Jesus.

The film opens up with King Herod (Kelsey Grammer) in crisis because the prophecies of Isaiah are circulating, and he fears for his throne. He consults with Caiaphas (Rufus Sewell) and Annas (John Rhys-Davies). Then, men from afar visit him and tell him of a special child, and Herod sends his soldiers to Bethlehem to kill male babies.

Herod Antipas (Eoin Macken) is aware of these prophecies, too, and when his father dies, he becomes Tetrarch of Galilee and Perea. It is this Herod who deals with Pontius Pilate (Stephen Moyer) when he arrives with his spoiled wife, Claudia (Tamsin Egerton.)

And so on and so forth. In broad strokes, the film follows the life of Jesus, but don't look for the angel Gabriel and the Annunciation, any hint of Mary's virginity, the birth of Jesus, or the breaking of bread at the Last Supper, which would have been the Passover meal and as such calls for some reflective moments. Instead, we get a moment of joviality.

My colleague Scott Young thought there was one glaring omission to making "Killing Jesus" a more authentic Jesus story:

"It did not include the start of the public ministry, when Jesus went to the synagogue and read the scroll from Isaiah [Luke 4:17] and proclaimed his mission to the poor. Except for a reference to doing unto others as you would have them do unto you and the Beatitudes in the film, there is no hint of Jesus' coming to set free those who are oppressed and bringing justice to the social order."

The most interesting theological issue to me is what Mary and Joseph knew about their son, Jesus, and when they knew it, and what Jesus knew about his own identity and mission and when he knew it. According to Bill O'Reilly, it is John the Baptist (Abhin Galeya) who informs Jesus (Haaz Sleiman, who in real life is a Muslim) and initiates him into the work of the Father. There is no losing or finding in the temple, when Jesus told Mary and Joseph he was about the work of his Father (Luke 2: 41-52), giving some indication of his self-awareness.

Young thought the film moved ahead at a good clip: "I found myself particularly engaged in the high-drama moments, such as Salome's dance and the beheading of John the Baptist. The scene of Judas kissing Jesus was also believable. Pilate's hesitation at sentencing Jesus to death seemed authentic; there was a subtlety to it that some versions of Jesus' life can overdo."

Certainly coming from the National Geographic channel and with Ridley Scott as one of the executive producers, audiences will see a film with fine acting, crisp dialogue and excellent production values. And National Geographic will never let you get lost; each time the locale changes, the name of the location shows up on the screen.

I hope that someday here in Hollywood, there will be a seminar where Jewish scholars will demonstrate to film and television producers how Jesus and the Jews of his time would have dressed and what their religious and life practices would have been. Here, most of the Jews wear the kippah, or skullcap -- but Jesus never does. These men were observant Jews, and by leaving off the prayer shawl and the kippah for Jesus and the disciples, the film, like almost every other Jesus film, lacks historical authenticity. Jesus was not a Christian. Of course, I was 12 when I found out that Jesus wasn't a Catholic, but you'd think that by now, with all the Jesus movies that have come before and since and the response from the Jewish community when the representation of Jewishness fails, that filmmakers would get it. Alas. Not yet.

Young continues: "As a life of Christ, I found the narrative of 'Killing Jesus' too literal; it lacked nuance. It took a traditional approach to the story, so it almost had a documentary feel to it. It deserves credit for the parts of the trial, beating, crucifixion, for not making these as horrific as Mel Gibson did in 'The Passion of the Christ.' "

Both Young and I agree that "Killing Jesus" is remarkable in how it captures the devotional Jesus; it is unremarkable in showcasing the radical Jesus, that is, how he upset the status quo of the religious culture of his day. And it severely lacks the sacramental and mysterious elements of religious faith.