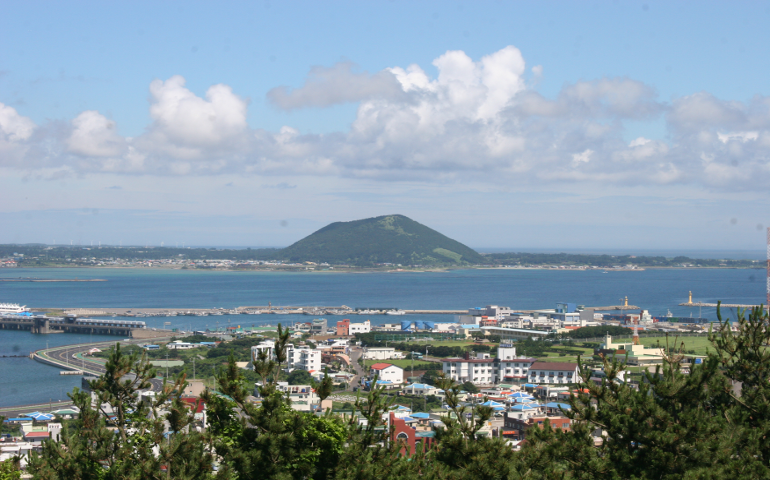 Pope Francis is considering a visit to South Korea this summer, and the activists of Korea’s Jeju Island are appealing for a solidarity appearance.

With news of Francis’ possible trip to South Korea, the activist website, Save Jeju Now, is urging people to send letters to the pope, asking him not only to visit Jeju Island, but also to preside over their daily Mass at the construction site of a future naval base. A sample letter to Francis states,

“As [Jeju] Bishop Peter Kang U-il said once, peace around the whole country begins here. We pray everyday courageously and tenaciously at the entrance of the construction site with the presence of thousands of riot cops and the threat of arrests coming from them. We have never given up the hope that one day we will be able to live peacefully without the massive naval base for nuclear warships. We will keep praying. So when you come to South Korea, please come down to Jeju and meet these incredibly beautiful people.”

Jeju Island is situated off the southern coast of South Korea and is a special self-governing province of the country. To the island’s east lies Japan and to its west is China. The volcanic island, as well as its intricate lava tube system of caves, is a UNESCO heritage site. Koreans call the island their Hawaii, and it is particularly beloved as a honeymoon destination.

This beautiful island has a bloody history, however. During the Korean War, due to fear of a communist uprising, one-tenth of Jeju’s population was massacred and more than half of the villages were completely destroyed, according to The Jeju Weekly. In memory of the tragedy, Jeju is now called “The Island of Peace.”

Despite its delicate ecosystem, as well as the island’s history of atrocious violence, the Korean government is building a naval base on the southern coast of Jeju Island in the village of Gangjeong. The base will accommodate 20 warships equipped to hold U.S. Aegis missile-intercepting systems. Jeju residents have been fighting this construction project for the past seven years, including the bishop of Jeju, priests and sisters (see NCR’s previous coverage here and here).

“Gangjeong villagers have used every possible democratic means to overturn the decision by Seoul to construct the base there,” Christine Ahn, the executive director of the Korea Policy Institute, wrote in a 2011 New York Times op-ed. “The villagers have squatted on their farmland that was seized by the government, and laid down in front of cement trucks intending to pour concrete over the volcanic rock where pure spring water meets the ocean. Despite the fact that 94 percent of Gangjeong residents voted against the base, the central government, the military and Jeju officials colluded to make Gangjeong the designated site.”

The U.S. filmmaker Regis Tremblay recently completed a documentary about the Jeju activists titled The Ghosts of Jeju, and he wrote an extensive letter to Francis, urging him to stand with the people of Jeju:

"For seven years, these farmers and fishermen, and their peace activist supporters from around the world, have been protesting seven days a week, 365 days a year. The Bishop of Jeju, Peter Kang, has supported the protest with his frequent presence, and by allowing his priests and nuns to participate.

Your Jesuit brothers in South Korea have been at the forefront of this struggle. Several have been arrested, fined, and imprisoned. … And, busloads of Catholic nuns from all over South Korea regularly go to Gangjeong to protest and stand in solidarity with the villagers.

Daily mass is celebrated in front of the main gate to the base. Never before have I witnessed the sense of community shared by people of all faiths and backgrounds.

Your Holiness, the entire world is looking to you as the most influential voice for the poor and for peace and justice around the world. A visit to Gangjeong will give hope to people everywhere who are opposing war, militarism, and the abuse of human rights.”

Activists are encouraging people to write their own letter to Francis in support of the Jeju Island naval base protests at this website.

Pacific Northwest gathering to focus on commitment to peace, nonviolence