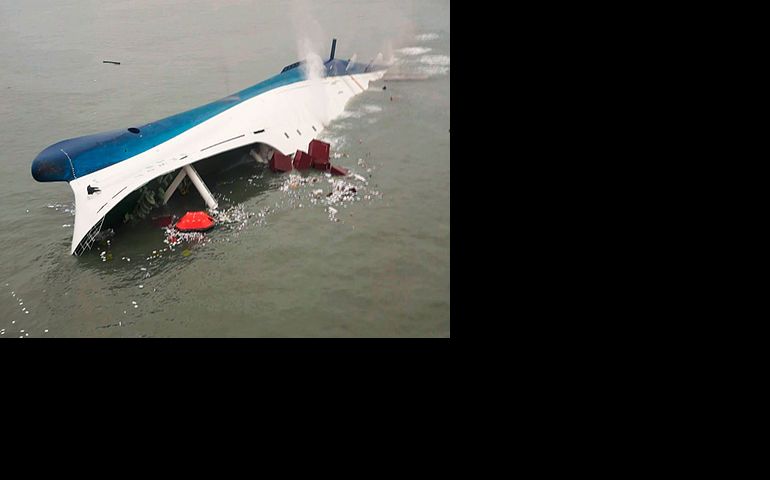 Nearly seven months after the Sewol ferry capsized and sank off the Korean peninsula killing more than 300 passengers, South Korea's parliament passed a bill Nov. 8 to set up an inquiry into the disaster, seeming to accede to a central demand of grieving victims’ families.

The bill calls for the appointment of an independent counsel and a 17-member panel to conduct an 18-month inquiry to bring charges against those responsible for the disaster. The panel will include three members drawn from the families of victims.

Family victims have grown deeply suspicious of the government, repeatedly lambasting it for corruption and cover ups. It is unlikely this suspicion will disappear quickly despite the parliament actions.  The ferry victims' families have yet to officially respond to these new government moves.

Meanwhile, more than 200 days after the tragedy, Korea is divided by the disaster with the nation still in a deep state of mourning.

Last August 14th, Pope Francis began a five-day South Korea trip – focused around the beatification of martyrs and a Catholic youth festival – by expressing solidarity with bereaved families from the ferry accident. He met with family members on several occasions during his visit, drawing international attention to their plight – and demands.

The Sewol ferry carried 476 passengers including a group of high school students on a field trip to Jeju Island, off the Korean coast, capsizing April 16.  Most of the crew, including the captain, were rescued by the Korean Coast Guard. Some passengers, who happened to be on the deck or escaped soon after the capsizing, were saved by fishing boats and commercial vessels that came before the Korean Coast Guard arrived. However, 304 passengers were trapped inside and drowned.

The Sewol disaster was the result of an illegal redesign, an overloaded cargo bay, and an inexperienced crew as well as corruption and a lack of proper oversight, investigations and hearings have shown.

The Sewol tragedy has captured the sympathies of the nation and grew metaphorically to represent the South Korean government’s inability to feel the pain or respond to the will of the people of Korea.  Tens of thousands have repeatedly rallied on the Seoul streets, wearing yellow, demonstrating on behalf of the ferry victims and their families. Millions of yellow paper prayer requests have been pinned to placards in makeshift monuments in parks around the nation.

The Korean parliament, meanwhile, has been at a standstill for months as the parties have been unable to agree on bills addressing the Sewol ferry matters.

That changed when three bills aimed at addressing the issues surrounding the April 16 ferry disaster were passed at Friday’s plenary session of the National Assembly.

The bills ― the special Sewol bill and revisions to the Government Organization Act and the Act on Regulation of Punishment of Criminal Proceeds Concealment ― were agreed by the two main ruling parties.

The revised Government Organization Act is aimed at strengthening and streamlining the government’s response to disasters and safety issues by reorganizing related state agencies. It allows the government to place South Korea's coast guard under the control of a new ministry overseeing public safety. The core of the revision is the establishment of a new ministry to oversee all safety and emergency functions of the government.

The special Sewol bill is aimed at shedding light on the developments that led to the accident, while the revision to the law on the proceeds of crime will give the authorities more power to confiscate unlawfully gained assets.  The bill will enable the establishment of a committee and a special counsel investigation into the accident.  Having an outside investigation of the tragedy has been a central demand of victims’ families.

An architect of European unity moves ahead on sainthood path

Lusaka archbishop says Africans must do more to protect girls