Land grab in the Cremisan Valley 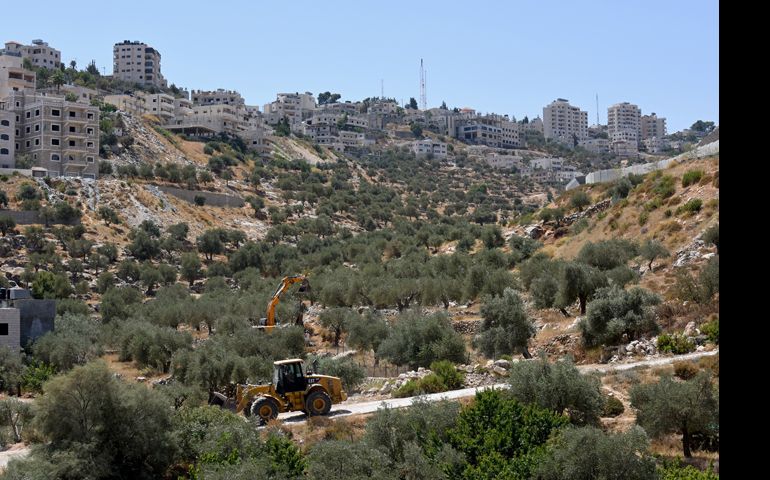 Israeli heavy equipment loads an olive tree after it was uprooted to to make way for the controversial separation barrier in the Cremisan Valley in Beit Jalla, West Bank, Aug. 20. (CNS/Debbie Hill)

The Cremisan Valley is a stretch of fertile land on the border between the West Bank and Jerusalem. It is home to a Salesian monastery, a convent and convent school, and a well-known winery. It constitutes one of the last green areas in the Jerusalem area, with large tracts of agricultural and recreational lands. Last week, an Israeli court decision brought the valley into the news, along with an unexpected champion, retired Latin Patriarch of Jerusalem Michel Sabbah.

Since 2006 the Israel Defense Force (IDF) has been building a separation wall, dividing Israel from the West Bank, in an effort to prevent terrorist attacks. The construction, however, has not moved neatly along the Green Line between Israel and Palestine. Instead, it has advanced primarily by confiscating Palestinian lands adjoining the border.

In fact, 85 percent of land confiscated for the wall lies in Palestinian territory. According to the Applied Research Institute in Jerusalem, 13 percent of the territory of the West Bank has been confiscated in this effort, much of it valuable farm land.

Until now, litigation contesting these confiscations had succeeded in only two cases, the Cremisan Valley and nearby village of Battir, a UNESCO World Heritage site. An earlier ruling of the Israeli High Court had forestalled the construction of the wall through the Cremisan Valley, but on Aug. 6 the court ruled that the earlier decision applied only to the Salesian property. It will remain undivided on the Palestinian side of the wall.

Some 3,500 dunams of farmland belonging to 58 Palestinians will fall on the Israeli side of the wall. (A dunam is .247 of an acre, or 1,000 square meters.) Palestinians claim the land is being confiscated for the expansion of the neighboring Israeli settlements of Gilo and Har Gilo. Much of the land consists of olive orchards where some trees are said to date back to the time of Christ.

After an earlier April 2 decision that seemed to permanently prevent the extension of the wall through the valley, Samia Khanaliyah, an architect for the Palestinian town of Beit Jala, which adjoins the Cremisan Valley, spoke to Britain's Guardian newspaper about the social cost of the confiscation.

"The land is important to people," he said. "Not just for those who make a living farming their trees, but because with so few parks, it is an important open space." Families in Beit Jala had already lost land to the wall and were threatened with losing more.

After the announcement of the Aug. 6 ruling dividing the valley but keeping the Salesian lands intact, Auxiliary Bishop William Shomali, the patriarchal vicar for Jerusalem, told Vatican Radio that church officials "were surprised this morning by the new decision of the High Court."

"We don't understand why this decision now," he said. "We cannot remain silent, we react and we hope that we will succeed, we will try again and again."

The world church had lent considerable support to the fight to protect the Cremisan Valley. In January, a delegation of bishops from Europe and North America, members of the Coordination of Bishops' Conferences in Support of the Church in the Holy Land, visited the valley.

Among them was Bishop Oscar Cantú of Las Cruces, N.M., chair of the U.S. bishops' Committee on International Justice and Peace. In February, Cantú had written to Congress, urging senators and representatives to push Israel to forego expansion of the wall through the valley. Cantú's predecessor on the committee, Bishop Richard Pates of Des Moines, Iowa, had also registered the U.S. bishops' concern with Secretary of State John Kerry.

Cantú's letter characterized the land confiscation as "a microcosm of a protracted problem that seriously jeopardizes the Israeli-Palestinian peace process." Occupation, confiscation, condemnation and other techniques, rationalized in the name of Israeli security, have progressively incorporated parts of the West Bank into Israel or its settlements.

The court and the IDF, the winning plaintiff that is building the wall, have failed to honor international protests on behalf of preserving the valley. Local Christians, nonetheless, took to the streets Aug. 30 to make known their opposition. Among them was the retired Latin patriarch of Jerusalem, Michel Sabbah, a longtime advocate of nonviolent protest on behalf of Palestinian rights.

"This is our land, and will always remain ours," said Sabbah. "They claim it's their land, but they use their soldiers, their tanks, their military occupation to force their will -- and it is not their land. It is our land, and one day their forces will withdraw and the land will return back to its indigenous Palestinian owners."

In a celebrated 1993 pastoral letter, "Reading the Bible in the Land of the Bible," Sabbah explained that three religions and two peoples claimed the Holy Land as their own. The religious title, he asserted, belonged to the three religions, Judaism, Christianity and Islam, as descendants of Abraham.

One must distinguish, however, between religion and politics, he said. Political title to the land, following Vatican policy, he argued, is a matter of international law. As such, Palestinians have a right to self-rule in their own homeland.

A lion in winter, Sabbah, retired now since 2008, has once again taken a prominent role in defense of Palestinian rights. In an address at Jerusalem's Truman Institute last January, he explained his motivation. "The question for all of us is: What kind of approach should we adopt as religious leaders regarding the conflict between Israel and Palestine? ... Should we take a stand regarding the oppressed and the oppressor or should we keep silent?"

"A Christian religious leader," he answered, "has to be on the side of the poor, the oppressed. Doing so, he is not forcibly antagonistic to the other party. He should not be against anyone. He is pro-human and pro-life and cares about the good of both parties. But when one is oppressed, he has to say this one is oppressed, and this oppression must end."

Christian responsibility in resistance to oppression is that of all human beings, to assert their dignity and defend their God-given rights, though with the nonviolent love of Christ.

Sabbah told the Truman Institute audience that the Christian's contribution is "to take all legitimate measures to put an end to this occupation and to attain independence and freedom. The legitimate measures, of course, must be in harmony with the principles of Christian faith and church teaching, the basic commandment being of love."

[Jesuit Drew Christiansen is distinguished professor of ethics and global human development at Georgetown University. (Full disclosure: In 1998, he helped organize and later facilitated the Coordination of Bishops' Conferences in Support of the Church in the Holy Land.) Rafat Aldajani is a Palestinian-American businessman and political commentator.]