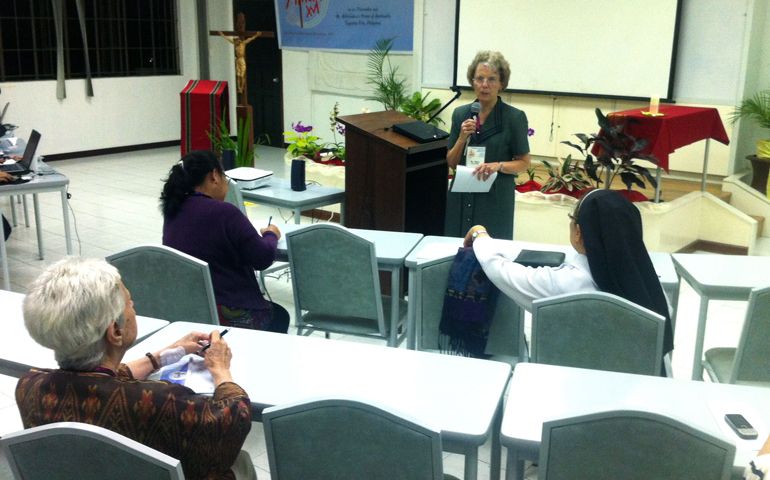 Tagaytay, Philippines — A Leadership Conference of Women Religious initiative to seek out often hidden and under-supported global south religious communities in the United States gained a wider audience this week at a gathering of women religious from throughout Asia.

In 2010, LCWR committed itself to explore ways to connect more intentionally with sisters worldwide as a way to stand in solidarity as a global body of religious women. It was decided to begin this exploration in the United States itself, where there are numerous sisters in ministry from the global south.

Presentation Sr. Joyce Meyer, formerly executive director of the Conrad Hilton Fund for Sisters and now working with LCWR, spoke to some 80 sisters gathered here under the auspices of AMOR, Asia-Oceania Meeting of Religious.

Meyer asked the women to answer survey questions aimed at helping a coordinated search for often struggling and sometimes even abandoned women religious who have come to America only to see their sponsors withdraw support over time.

"Abandonment is sometimes a matter of a change in bishops with the new one refusing to support the initiative of the former bishop, who invited the women to the U.S. Sometimes meager funds dry up," Meyer said. "This story is part of a larger story about an ongoing religious migration from south to north."

Meyer said in her work with the sisters fund, she discovered a number of small communities of sisters from the global south who had come to the U.S. to work in a variety of communities but often were not prepared for life in a new culture. "Language, professional preparation, housing, laws for beginning ministry projects are only a few challenges these woman face," she said. "In some instances sisters take on low paying jobs in order to send money back to their communities in the global south or just to survive themselves."

Meyer explained that those from indigenous communities "are especially vulnerable to isolation because their entrance into the country was often informal and those who invited them do not provide resources the sisters need."

Often the immigrant women religious, she went on, do not have opportunities "to live in decent and secure housing, or have ministries that offer them at least a living stipend, time for spiritual retreats and rest." Meyer said often, these women's own superiors cannot afford to visit more than every four or five years, and some are not aware of assistance that might be available. Consequently, she said, the sisters frequently experience themselves as abandoned and insecure.

To bring greater visibility to the problem, LCWR, she said, has begun partnering with other church organizations. A nationwide survey is one step in the process.

Those with information about this problem or want more information can contact Sr. Joyce Meyer at JMeyer7394@aol.com.