Lessons from Nonna's generation: She recycled long before it was today's trend 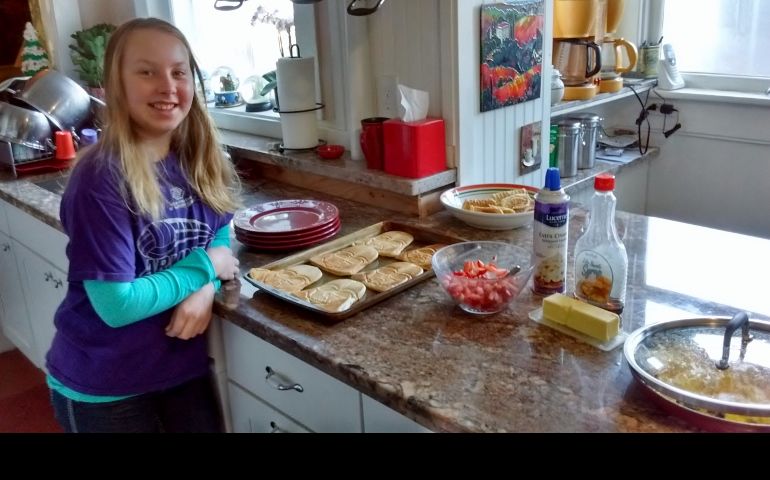 Emmaly, 10, is helpful in the kitchen. (NCR photo/Amy Morris-Young)

One weekend, our granddaughter Emmaly, 10, came over to stay. Her dad brought her straight from school on Friday. She walked in our back door, hugged me around the middle, went to our cooking drawer, pulled out her apron, and tied it on. She went immediately to the kitchen sink, washed her hands, and dried them on the towel hanging next to it.

She sidled up close to me, where I was preparing dinner, and said: "Okay, what can I do?"

I pushed the cutting board and a pile of potatoes in front of her, and she started cutting them in quarters, the way I showed her.

Her hands paused for a moment, then she continued her chopping. "Oh, you probably don't know much about this. Just saving the environment stuff."

I smiled down at the pan, in which I was arranging a cool pink rump roast on a rack.

I wiped my hands on my apron, reached for the garlic salt and black pepper and said: "Well, tell me about it, then."

"It's called going green. We are supposed to reduce, reuse and recycle."

She continued, the voice of her teacher clearly echoing in her choice of words: "It is called being eco-friendly. We need to make our carbon footprint smaller. Do you know what a carbon footprint is?"

She looked up at me, her blue eyes sincere, full of compassion for my advanced age. "It is a brand new idea. That's why you probably never heard of it."

I let out a loud laugh.

Her eyes showed confusion. "What?"

I smiled as I pushed the cellophane bag of raw broccoli over next to her cutting board. "Emm. Those are actually old ideas. We are actually going backwards here."

"Really?" She emptied a pile of large green florets from the bag, and started trimming them the way I had showed her. "That's not what my teacher said."

"Well, let me tell you about my Nonna, okay?"

I pondered how best to describe my Nonna -- my Italian Catholic grandmother -- who was way ahead of her time.

Not only did she have 10 children, but she and my Grandpa Red owned and operated Red Top Market for 55 years. Grandpa Red ran the warehouse and butcher counter in the back. Nonna handled the rest.

Since their store was in the country -- out in the dusty far corner of the Antelope Valley in Southern California -- they even had a tiny U.S. Post Office just to the right of the front door to accept mail and packages for rural folks. To add to her countless duties, Nonna was also postmistresses for that part of the county. My little brothers and I were impressed as we inspected the big federal locks on the thin glass door, and we ogled the frightening hard faces on the "Most Wanted" posters affixed to the walls of the metal cage.

Nonna was also deeply involved in her Catholic parish, Sacred Heart, in Lancaster. She cooked dinner at least weekly for the pastor, Fr. Kennedy, and she prepared a weekly meal for the young priests under his tutelage.

The oldest child in her immigrant Italian family -- and the primary translator for her parents whose English never really improved -- Nonna grew up bossy and naturally assumed leadership roles. She invariably headed up the women's groups in the parish, as well as the PTA at her kids' schools.

In the late 1970s, when I was a teenager, and newspapers and TV were full of photos of Gloria Steinem and Helen Gurley-Brown and ladies picketing government buildings and burning their bras, I asked Nonna what she thought about all this women's liberation stuff.

She looked me straight in the eye and deadpanned: "What would I do with more power?"

She smiled slightly, but in her eyes, I recognized the steel of knowing exactly who she was, and how much she was worth. It was more than enough. I knew then that if I could do one thing in my life, it would be to be like her.

I told Emmaly: "Okay, so, I don't think I ever saw my Nonna throw away anything."

She looked up at me, "Seriously?"

"Seriously. People used to use everything, Emm. They had to. First off, they were really poor. Her parents came to America so they didn't starve back in Italy. Literally."

She breathed out, "Wow."

"And then they all went through what is called the Great Depression. Have you learned about that in school yet?"

She shook her head.

"Between the two World Wars, from 1929 until the early 1940s, there was a Depression in our economy. This was caused by a lot of things, but the big two were the stock market crashing and a huge drought. It turned the middle of America into what they called the Dust Bowl. Most people lost their jobs, their homes, everything. And the ones who still had them had to help out everyone else."

She stared at the cutting board, listening intently.

"So everyone learned to adapt and survive. Talk about reduce, reuse and recycle. They kept everything."

"Well, my Nonna only had cloth grocery bags. She wrapped her leftovers in layers of newspaper. She used cloth diapers, washed them with a big wringer machine, and dried them on a clothes line."

Emmaly's eyes were huge: "For all those babies?"

I nodded, "Yes, ma'am. She had a garden, so any egg shells, coffee grounds, scraps of food," I pointed at the growing pile of broccoli ends next to her, "went into her compost bin then were turned back into the garden. Compost is like homemade fertilizer."

Emmaly nodded, "Uh-huh. My Mommy does that for our garden at home."

I put the roast into the oven, and came back to the sink. I wiped the countertop clean with a sponge, then dried it with a towel.

"And they were one of the luckier families, Emm. They had a grocery store, so there was always meat that was about to go bad, veggies that were turning, bread that was too old to sell. So they always ate. And I think they fed a lot of their kids' friends, too. And neighbors who were struggling. I have heard stories about how there was always at least one extra head at their dining table."

Emmaly spread the broccoli florets in a baking pan, and then sprinkled olive oil over the top. I handed her the jar of crushed garlic, and she smushed out tiny bits from the teaspoon. Once the spoon was empty, she turned them with her hands until everything was evenly coated.

I took the pan to the oven, while she washed her hands. She sat on the stool at the end of the countertop, while I finished with the potatoes.

I said: "And when the Depression was over, Nonna still never threw anything away. She used all the past-date meat and veggies in her store to cook huge pots of soup and stew."

I pushed the potatoes off the counter into another roasting pan, and sprinkled over olive oil and parsley. I put that pan into the top oven.

"If the kids wanted spending money, they collected empty pop bottles and turned them in at the store. You wore your shoes and blue jeans until they had holes in them, and then you patched those till they plain wore out."

"Taking care of the environment, and each other, was just normal life. Now that I think about it, Emm, it seems like the things that started in the 1960s and 70 -- plastic bags and plastic wrap and bottled water and boxes of packaged food and stuff -- must have been created for convenience when a whole lot of women started working outside of the home. In the short term, they must have made it easier for ladies to be both a mom and a career woman -- but in the long term, those are the things that pile up, right?"

She smiled and nodded. "So your Nonna was eco-friendly before it was cool? No way!"

"Way," I smiled and rinsed the cutting board in the sink. I dried it with the towel, and laid it back next to the toaster. "So, what are you going to do to save the world, Miss?"

"Hmm," she held her chin and looked at the ceiling.

I opened the drawer next to the sink, and pointed down at the cloth napkins in it. "How about you start by setting the table, yes?"

She smiled and jumped up. "Yes, Nonna."

People | Lessons from Nonna's generation: She recycled long before it was today's trend

Francis' encyclical an urgent call to prevent world of 'debris, desolation and filth'