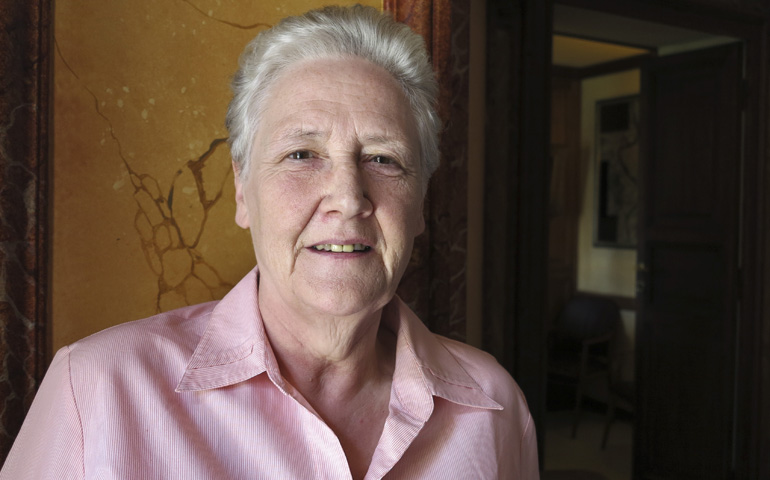 Marie Collins, a clerical sexual abuse survivor from Ireland, poses for a photo during a conference on child protection in Rome in this July 9, 2014, file photo. (CNS photo/Carol Glatz)

A former member of Pope Francis' commission on clergy sexual abuse has responded to news that Australian police are pursuing charges against Vatican financial chief Cardinal George Pell over allegations of historic sexual abuse against minors.

Marie Collins, an Irish clergy abuse survivor, said she will not pre-judge Pell's guilt or innocence regarding the charges against him. But she said Francis should not have appointed the cardinal the prefect of the new Secretariat of the Economy in 2014.

"What I have no hesitation in saying is that it has been proved that Cardinal Pell is guilty of the appalling mishandling of cases of abuse when still in place in Australia and causing untold pain to the victims in those cases," said Collins, writing in a comment on her personal website.

"He should never have been allowed to hide out in the Vatican to avoid having to face those in his home country who needed answers," Collins said.

"The fact that Cardinal Pell was appointed to a very senior post in the Vatican rather than having to face any sanction for his mishandling of abuse cases was a slap in the face to all those he had let down so badly, not only victims but Catholic people who have spent years now hearing assurance from the Catholic Church that it is taking the issue seriously," she continued.

Pell is the first Vatican official to be charged by a government in a clergy abuse case. In a statement to journalists at the Vatican press office June 29, the cardinal forcefully denied the charges and said he would be returning to Australia to defend himself.

"I'm innocent of these charges," said Pell, who said he has taken a leave of absence from his role at the Vatican as he answers the charges. "They are false. The whole idea of sexual abuse is abhorrent to me."

While the charges brought by the Victoria police in Australia relate to allegations regarding historic actions by Pell himself, abuse survivors and advocates have said in the past that the cardinal mishandled priests accused of abuse in separate periods serving as the head of the Melbourne and Sydney archdioceses.

Pell gave testimony in March 2016 to Australia's Royal Commission Into Institutional Response to Child Sexual Abuse about his actions during those periods.

Collins was appointed by Francis as one of the original members of the Pontifical Commission for the Protection of Minors. She resigned March 1, citing frustration with Vatican officials' inaction in implementing the commission's recommendations.

In her statement Thursday, the Irishwoman said Pell's leave of absence came "far too late." She said he should have stepped down from his Vatican role when reports emerged last year that he was being investigated by Australian police.

"Once an accusation of sexual abuse was made against him he should have been stepped down until that accusation had been investigated," said Collins. "This is the standard that applies to ordinary priests and religious in my country and elsewhere under Church guidelines -- why should rank make any difference."