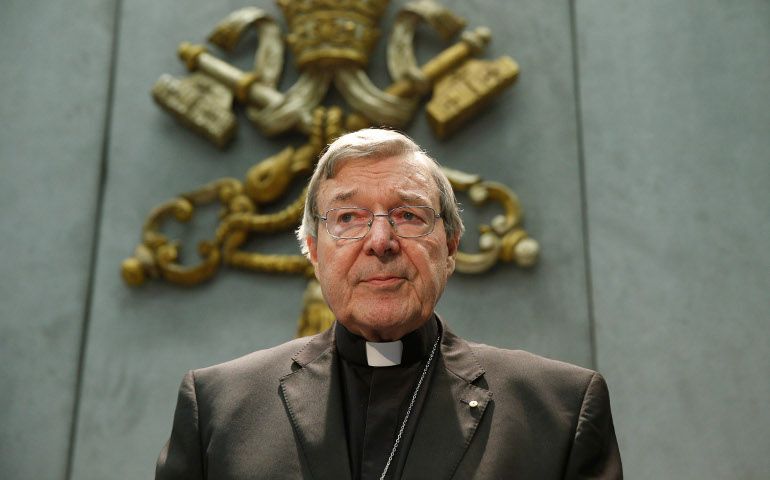 Australian Cardinal George Pell arrives to deliver a statement in the Vatican press office June 29. Speaking after Australian authorities filed sexual abuse charges against him, the cardinal denied all charges and told reporters he looks forward to having an opportunity to defend himself in court. (CNS/Paul Haring)

Vatican City — Australian police announced Thursday they are pursuing charges against Cardinal George Pell over allegations of historical sexual abuse against minors, bringing the decades-long clergy sexual abuse crisis directly to the Vatican for the first time and placing pressure on Pope Francis to oust one of his closest advisors.

"Police have charged Cardinal George Pell with historical sexual assault offenses," Deputy Commissioner Shane Patton of the Australian state of Victoria announced. "Cardinal Pell has been charged on summons and he is required to appear at the Melbourne Magistrates Court on July 18 this year for a filing hearing."

"Cardinal Pell is facing multiple charges in respect of historic [sic] sexual offenses and there are multiple complainants relating to those charges," Patton continued.

In a statement to journalists at the Vatican press office early Thursday morning, Pell said Francis had granted him a leave from his role as prefect of the Secretariat of the Economy to return to Australia and answer the charges against him.

"I'm looking forward finally to having my day in court," said Pell. "I'm innocent of these charges. They are false. The whole idea of sexual abuse is abhorrent to me."

The cardinal said he was "very grateful" to Francis for granting him leave and that he sees the charges as "an opportunity to clear my name and then return here back to Rome to work." Pell did not take questions after he read his statement.

The police decision brings the decades-long clergy sexual abuse crisis directly to the Vatican for the first time. While survivors of abuse and advocates have long said the church's central command has not responded effectively to the crisis, this is the first time a Vatican official has been charged by authorities.

The charges also mark a stunning cap to Pell's storied career. The cardinal, 76, has long been the highest ranking Australian Catholic prelate, leading the archdioceses of both Melbourne and Sydney before being called to Rome by Francis in 2014 to serve as the Vatican's number-three official.

Pell also serves on the pope's nine-member Council of Cardinals, which is advising the pontiff on reforming the Vatican bureaucracy.

Dominican Fr. Thomas Doyle, an expert on the church's response to clergy sexual abuse, said it was appropriate that Pell take a leave of absence while the police pursue the charges against him.*

Doyle also told NCR in an interview that the willingness of the Victoria police to pursue charges against the cardinal shows that law enforcement officials around the world are no longer giving deference to the church when it comes to abuse allegations.

"A lot of the deference and the protection that the Holy See has counted on and taken for granted for so long is seriously eroding," said the priest. "The defenses that the Holy See could count on are now in a precarious position."

Doyle said he also thought the pope should "start seriously thinking" about submitting Pell to a canonical investigation regarding the allegations.

Vatican spokesman Greg Burke issued a statement June 29 saying the city-state "has learned with regret the news of charges filed in Australia against Cardinal George Pell for decades-old actions that have been attributed to him."

"The Holy Father, having been informed by Cardinal Pell, has granted the Cardinal a leave of absence so he can defend himself," said Burke. "During the Prefect's absence, the Secretariat for the Economy will continue to carry out its institutional tasks."

While the spokesman said the Vatican "expresses its respect" for the Australian justice system, he also said "it is important to recall that Cardinal Pell has openly and repeatedly condemned as immoral and intolerable the acts of abuse committed against minors."

The Victoria police did not detail the allegations that led them to bring charges against Pell.

"None of the allegations that have been made against Cardinal Pell have obviously been tested in any court yet," the police statement said June 29. "Cardinal Pell, like any other defendant, has a right to due process and so therefore it is important that the process is allowed to run its natural course."

A recent Australian book, Cardinal: The Rise and Fall of George Pell, detailed an allegation of abuse made against Pell by two choirboys during his time as archbishop of Melbourne from 1996-2001.

Author Louise Milligan, who reports for the Australian Broadcasting Corporation's nightly news program "7.30," reported in the book that one of the choirboys came forward to police following the death of the other choirboy in 2014.

Francis spoke about the allegations against Pell in July 2016, when news was first reported that Australian authorities were investigating the cardinal. The pope promised he would speak about the matter once the justice system had come to its conclusions.

Pell previously faced an allegation of historical sexual abuse in 2002, shortly following his appointment as archbishop of Sydney. Charges were not brought by police over the allegation, but a retired civil judge was appointed by the Australian church to investigate the matter according to the church's internal processes.

Citing a lack of corroborative evidence for the allegation and Pell's sworn denial, the judge found that he was "not satisfied that the complaint has been established."

Pell previously gave testimony in March 2016 about his historical handling of sexual abuse allegations as an Australian church official to the country's Royal Commission Into Institutional Response to Child Sexual Abuse.

The cardinal testified for that occasion over four days via video link from Rome, saying he was unable to travel to Australia due to health problems.

Pope Benedict explains things to me

Calls made for release of L.A. abuse papers