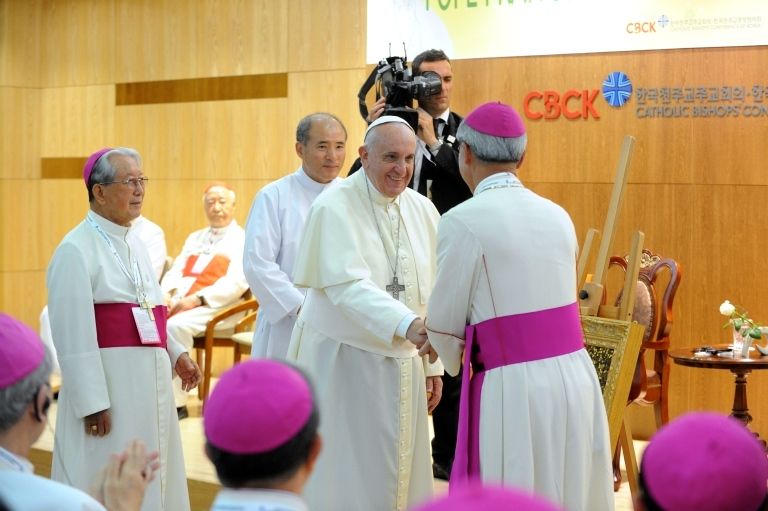 On the first day of Pope Francis’ visit to South Korea he met with the Korean bishops, telling them to be one with the poor.

However, some of his strongest advice was not reported at the time as several paragraphs from his talk were dropped in the official text distributed on the Korean bishops’ sponsored media website.

The Korean bishops set up website – 2014 Pastoral visit by Pope Francis to Korea – for the many hundreds of local and foreign media reporting on the Francis five-day journey through South Korea. That website, for accredited journalists, supplied official texts and photographs for all the events.

In the wake of Francis’ visit, several Korean journalists noticed the discrepancies between the Francis speech, as reported in the text on the Vatican website and the texts on websites made available to the media, as well as to Koreans, on the Catholic Bishops’ Conference of Korea.

Asked by these journalists to explain the discrepancies, a spokesperson for the Korean bishops said the paragraphs were inadvertently dropped.  The missing paragraphs have now been added to Korean bishops’ website, but not to that available to the media, a website that will shut down at the end of August.

As earlier reported, Francis told the Korean bishops that “solidarity with the poor is at the heart of the Gospel,” going on to say,  “it must penetrate the hearts and minds of the faithful and be reflected in every aspect of ecclesial life. … I pray that this ideal will continue to shape the pilgrim path of the Church in Korea as she looks to the future.”

What he said next, however, was not reported because it was dropped from the text given to the media.

Francis spoke specifically about the difficulties a local church can have when living in prosperity, warning the bishops not to be a “middle class” church, one that loses its radical gospel mission and even becomes an embarrassment to the poor.

I have said that the poor are at the heart of the Gospel; they are present there from beginning to end. In the synagogue at Nazareth, Jesus made this clear at the outset of his ministry. And when in Matthew 25 he speaks of the latter days, and reveals the criterion by which we will all be judged, there too we find the poor. There is a danger, a temptation which arises in times of prosperity: it is the danger that the Christian community becomes just another “part of society”, losing its mystical dimension, losing its ability to celebrate the Mystery and instead becoming a spiritual organization, Christian and with Christian values, but lacking the leaven of prophecy. When this happens, the poor no longer have their proper role in the Church. This is a temptation from which particular Churches, Christian communities, have suffered greatly over the centuries; in some cases they become so middle class that the poor even feel ashamed to be a part of them. It is the temptation of spiritual “prosperity”, pastoral prosperity. No longer is it a poor Church for the poor but rather a rich Church for the rich, or a middle class Church for the well-to-do. Nor is this anything new: the temptation was there from the beginning. Paul had to rebuke the Corinthians in his First Letter (11:17), while the Apostle James was even more severe and explicit (2:1-7): he had to rebuke these affluent communities, affluent Churches for affluent people. They were not excluding the poor, but the way they were living made the poor reluctant to enter, they did not feel at home. This is the temptation of prosperity.

I am not admonishing you because I know that you are doing good work. As a brother, however, who has the duty to confirm his brethren in the faith, I am telling you: be careful, because yours is a Church, which is prospering, a great missionary Church, a great Church. The devil must not be allowed to sow these weeds, this temptation to remove the poor from very prophetic structure of the Church and to make you become an affluent Church for the affluent, a Church of the well-to do – perhaps not to the point of developing a “theology of prosperity” – but a Church of mediocrity.

Also dropped from the remarks Francis made to the Korean bishops was advice he offered to remain close to their priests. He was specific: “Brothers, if a priest phones you today and asks to see you, call him back immediately, today or tomorrow.”

These were the words that were not reported to the media and did not originally appear on the Korean bishops’ conference website.

I urge you to remain close to your priests. Close, so that they can see their bishop often. This closeness of the bishop is not only fraternal but also paternal: as they carry our their pastoral ministry, priests often need it. Bishops must not be distant from their priests, or worse, unapproachable. I say this with a heavy heart. Where I come from, some priests would tell me: “I’ve called the bishop, I’ve asked to meet him; yet three months have gone by and I have still not received an answer”. Brothers, if a priest phones you today and asks to see you, call him back immediately, today or tomorrow. If you don’t have time to see him, tell him: “I can’t meet you because of this, that and or the other thing, but I wanted to call you and I am here for you”. But let them hear their father’s response, as quickly as possible. Please, do not be distant from your priests.