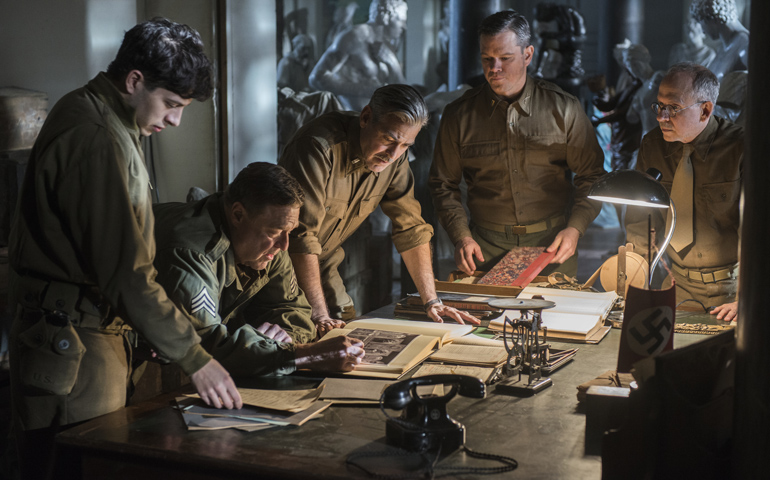 The plot for filmmaker (director, co-writer, co-producer, lead actor) George Clooney's newest film is at once simple and complex as well as intriguing. The promo lines for the film say that "The Monuments Men" is about the greatest treasure hunt in history, but it's so much more than this. It's about culture, justice, art, war and the lives of millions of people who perished because Hitler and his Nazi thugs wanted to wipe them and their culture off the face of the earth. It's about a few hundred men and women from the Allied countries who left their careers in the arts, academia, and the museum world during World War II to find, save, protect, preserve and ultimately restore the stolen art of Europe to its rightful owners or their heirs.

The film is based on Robert M. Edsel's 2010 book The Monuments Men: Allied Heroes, Nazi Thieves and the Greatest Treasure Hunt in History. After I saw the film, I started reading the book. It's detailed and fascinating, and it soon became clear why the film doesn't delve deep enough into this human tragedy and cultural catastrophe that we know so little about. There is so much to this story that Edsel had to write a second book to cover it all: Saving Italy: The Race to Rescue a Nation's Treasures from the Nazis. I hope this book forms the basis for a sequel to "The Monuments Men."

In the film, names have been changed and some of the characters given flaws "for story and entertainment purposes," according to Clooney. Overall, nine characters represent the Monuments Men, which by the end of the war included about 400 men and women from 13 nations. The story opens with Frank Stokes (Clooney) telling officials in Washington about the need to protect the cultural artifacts of Europe in hopes of putting together what would become a mostly middle-aged team of experts who could do this work. He already knows whom he wants on his team, and he goes to work to recruit them once Washington approves the plan.

The new units need to move fast so they can get ahead of the steady movement of the Allied forces in France, Belgium and Germany that had no guidance against destroying what crossed their path. James Granger (Matt Damon) tops Stokes' list, followed by Richard Campbell (Bill Murray), Walter Garfield (John Goodman) and Preston Savitz (Bob Balaban). Donald Jeffries (Hugh Bonneville) represents Great Britain, and Jean Claude Clermont (Jean Dujardin) represents unoccupied France's efforts; he is assigned to work with Campbell.

Claire Simone (Cate Blanchett; her character is inspired by Rose Valland) is an art curator in Paris who is forced to run the "depot" where the loot stolen from French Jews is packed and shipped to Germany. At night, she secretly records each work of art, the name of the owner, and the destination in Germany. She trusts no one, and it is up to Granger to find a way to work with her.

Jeffries, already familiar with the great art of Belgium, works with priests to do what he can to save the Ghent Altarpiece and Michelangelo's Madonna and Child in Bruges. It is the only sculpture of Michelangelo's outside of Italy, and Jeffries is determined to save it. Soon, he discovers the extent of the sacrifices required of this unique group of officers.

As you can tell, I am a fan of the books, movie and story. At the press day for the film, Clooney and Edsel addressed the ethical dimensions of what the Monuments men and women were trying to do: Is it right for someone to die for culture?

"It's hard to write a script about saving art," Clooney said. "It doesn't sound all that fun, but it's about culture, these monuments and about the fabric of the culture, our history and mankind's way of recording history. And some would die for this."

But is art worth a life? Edsel said, "I think the best answer, though it is an individual answer, that characterizes the view of the Monuments Men, is that of Deane Keller, a Monuments officer who worked in Italy: 'No work of art is worth the life of a single boy, but risking your life to fight for a cause is absolutely worth the effort.' The Monuments Men felt across the board that for one person to run into a burning building to save a da Vinci, no, it's not worth a single loss of life. But to risk your life for a way of life that includes respect for cultural property, yes, it is worth the risk. Indeed, two Monuments Men were killed during combat in World War II."

Clooney answered a journalist who asked if Monuments Men still exist: "Yes, they do exist. But [the U.S. has] done poorly at times protecting the art of people in war areas, but there is a stronger effort now. As I saw in the Sudan, you can kill the people and rape their women and murder their families, but when you take away what they make, the signs of their culture, that's when society breaks down. It wasn't enough that soldiers killed them and their children, but they had to destroy what made the village theirs. [The U.S.] started to understand this more when we didn't protect the museums and art when we invaded Iraq. So much was lost that we'll never get it back."

There are many teachable moments in the film. "This story is so huge, and so big, and so hard to get our heads around, but I believe this film will change the landscape of the world for years to come about protection of cultural property," Edsel said. "The power of film to reach a worldwide audience can raise this awareness. I am just the messenger. The filmmakers have given us a fun and enjoyable way to learn, a chance to take back this story with us and tell it in their own communities so that we will want to preserve the works of art and culture in the world."

Is this a movie about the Holocaust? At one point, the Monuments officers discover a barrel of gold teeth that had been pulled from the mouths of Jewish people. In reality, there were hundreds of these barrels discovered, along with those containing eyeglasses, piles of furniture, dishware and other mementos of people's lives that the Nazis had stolen and hidden away.

"We talked about the idea of making this discovery of the teeth smaller and more personal and, therefore, more impactful," said co-writer Grant Heslov. "This is not a movie about the Holocaust, per se, but you cannot not address it. We felt this was a way to speak to the murder of millions of people without changing the core of the story" about finding the lost and stolen art of Europe.

When you consider the size of Edsel's book -- 512 pages -- and that Clooney and Heslov had to compress the story into about 120 pages for the script, something had to go. First of all, most of the characters in the film are composites, which is rather obvious. Then there is levity in the film that may seem inappropriate to some audiences. After all, we know the magnitude of what Hitler was doing, how many of our own people were dying, at the very time these Monuments men and women were working to save and reclaim what he had stolen. But humor and laughter are what bind people together in times of danger, so I am willing to give Clooney a pass on this. To have been more graphic would have caused the film to get an R rating!), then students would not be able to see it. (It is rated PG-13 for images of war and historical smoking -- that's a new one for me!)

I have heard people chuckle when some college graduates say their degree is in art history, as if this is some kind of pretend degree. Art history is a wonderful field of study, and without experts in this field, more artifacts of Western civilization would have been lost forever. Art historians and experts are playing a role in returning stolen art to its rightful owners when it resurfaces from time to time, as well as the plundered art still held in Swiss banks and some museums.

If people of goodwill and faith put aside any perceived flaws in the film, you will notice that there is much goodness, generosity and morality in the characters, a strong visual Catholic ethos to the narrative, a deep respect for the Jewish religion and people, a love for humanity and the beauty that people create when they interact with our world.

Want to fill in the blanks and meet several of the real people in the film? Watch "The Rape of Europa " (2007); it's on Netflix.