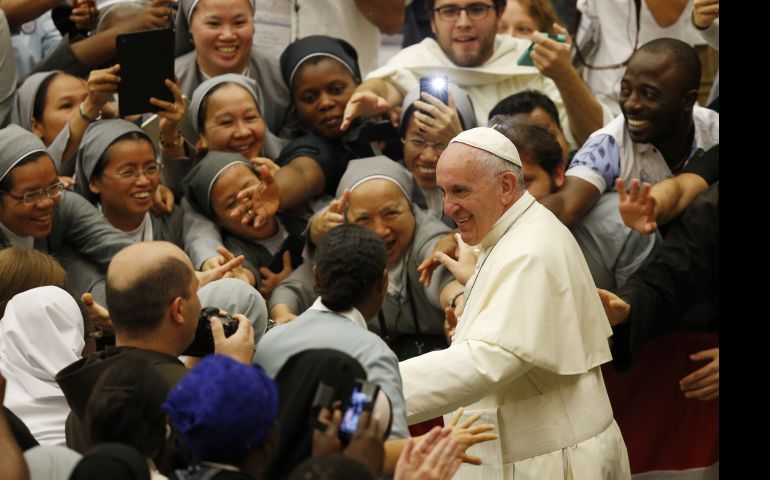 Pope Francis leaves an audience with religious from around the world in Paul VI hall at the Vatican Sept. 17. (CNS/Paul Haring)
This article appears in the Francis in the United States feature series. View the full series.

“Wisdom is precisely this: to see the world, to see situations, circumstances, problems, everything through God’s eyes.” – Pope Francis

Pope John XXIII never visited the United States but he made a lasting impression on me when I visited him in 1959. I was all of 19-years-old. It was at a papal audience with 40 others. We were in a big room with velvet drapes and paintings that were taller and older than all of us put together. I was one of nine seminarians from the U.S.

The pope waddled into the room. He didn’t have the presence of a powerful man but the mischievousness of a small boy who came fourth in a family of 14. He stopped in the middle of our semi-circle and folded his hands.

“I am so sorry,” he said in Italian, “but I am an old man and very tired this afternoon. I am not able to spend much time with you. Ma ancora.”

That night I wrote in my travel diary: “There was a cripple lying on a portable bed in the midst of us. The pope went to him, caressed his head, and whispered in his ear. The man laughed and cried at the same time. Then il papa spoke words of encouragement to all of us while taking the time to look at each of us as if he knew us.”

When John XXIII (1958-1963) opened the windows of the church in 1962 with the Second Vatican Council, he not only let new ideas in, he let beautiful birds out that had been trapped inside. Those birds were spiritual ideas that were caged for centuries in favor of parrots that repeated the same words over and over again. The birds began singing new songs that were variations on age old melodies. Catholics listened, heard, and they too "sang a new song" (Psalm 144:9). It was a sea change in a church that had stayed the same for longer than anyone could remember. "Vatican II was a force that seized the mind of the Roman Catholic Church and carried it across centuries from the 13th to the 20th," wrote Lance Morrow in Time magazine.

I was at St. Mary of the Lake Seminary in Mundelein, Ill., during the Council. I couldn’t wait to get out and get dirty for the sake of souls. Many of us volunteered to work in poor parishes on our summer vacations. We also did things seminarians had never done before: we questioned the rules. We read unassigned books by European theologians like Karl Rahner, Edward Schillebeeckx, and Bernard Haring, and some of us even got into Zen. Seminarians weren’t allowed to read newspapers or magazines or listen to radio in those days so we knew little about things like Vietnam. We had no idea a hard rain was gonna fall.

The Good Pope died on June 3, 1963, a half year ahead of another John, President John F. Kennedy who was assassinated on Nov. 22. Papa John had just finished what would become a landmark encyclical, Peace on Earth, and that just before the war in Vietnam began to flame. The 1950s didn’t really end until 1963.

In 1965, his successor, Paul VI  (1963-1978) became the first pope to visit the United States. Who can forget his challenge to the nations in a speech at the United Nations: "No more war!  War never again! If you wish to be brothers, drop your weapons! One cannot love while holding offensive arms!"

Paul carried through the reforms of Pope John XXIII, just as President Lyndon Johnson turned Kennedy’s vision of racial equality into law. Both the church and the country became polarized. There was no liberal and conservative church before Vatican II. Everyone was on the same illuminated page. There were no Americans on the streets protesting its wars before Vietnam. This was the world our Mundelein class of 1966 entered as priests.

In 1968, Paul VI released his encyclical, Humanae Vitae, that troubled the waters even more. A year earlier, a Papal Commission of 72 experts from five continents, including bishops, clergy, physicians, and married couples, after three years of study, advised him that artificial birth control was not intrinsically evil and that Catholic couples should be allowed to decide for themselves what methods to use.

But the head of the commission, Cardinal Alfredo Ottaviani, counseled the pope that a change in this teaching would jeopardize the church's credibility. Humanae Vitae reinforced the church's anti-contraception position. Immediately the church's credibility was in jeopardy. More and more people, including parish priests, had been expecting a change. Today, eight out of ten Catholics are certain that artificial birth control is a blessing, not a sin.

Throughout Paul’s papacy and beyond, American bishops never questioned the non-infallible ruling. Instead they focused so much on sexual issues that soon enough even their teachings on peace and justice, cornerstones of Catholicism, went unheard too. Many young priests discovered they couldn’t change anything and, more so, knew they didn’t have what it takes to remain celibate for the rest of their lives. By the mid-70s, our class of 40 priests would be halved as many of us, including me, left to marry and raise families.

The third pope to visit the United States was Pope John Paul II (1978-2005). Karol Wojtyła of Poland became pope three years before Ronald Reagan of California became president. Both men had once been actors and had the presence of movie stars. Reagan re-ignited the American spirit and Wojtyła revitalized pride in being Catholic.

John Paul II was, in fact, a superstar. He spoke eight languages and visited 126 countries. He was shot four times by an assassin and visited him in prison to forgive him. He made ecumenical history as the first pope to pray in a synagogue and to visit Auschwitz. And who can forget his visit to New York in 1979, cooing with teenagers in Madison Square Garden, celebrating a Mass in Shea Stadium that was televised to millions around the world. This pope was more famous than the Beatles!

Conservative TV pundits still boast how John Paul II and Reagan worked together to defeat communism. His was an energy that rivaled the force of Vatican II, and he felt it was his duty to put a lid on it so everyone could be on the same page again. He favored questionable traditionalist organizations like the Legion of Christ whose founder Marcial Maciel was suspected and later revealed to be a sexual predator. He let the hideous clergy sex abuse scandal lie there and fester like a rabid rat. He suppressed dissent through his lieutenant Cardinal Joseph Ratzinger, head of the Congregation for the Doctrine of the Faith, formerly an office of the Inquisition. He even went so far as to forbid Catholics to talk about women’s ordination. His papacy was in many ways as different from John XXIII’s as Reagan’s presidency was from Kennedy’s. One looked to the future, the other to the past.

When John Paul II died after a 26-year papacy, the third longest in history, the College of Cardinals (nearly all of them appointed by him) voted in Ratzinger who chose the name Benedict XVI (2005-2013). He became the third pope to visit the United States, in 2008. That year, a study by the Pew Forum on Religion & Public Life revealed that one in 10 U.S. adults were former Catholics. If they were a denomination they would be the second largest in the country.  More priests continued to die than came in, making the priesthood a vanishing species. Benedict’s papacy was remarkable in that he became the first pope to resign while still alive.

And now it is Standing Room Only as the curtain opens for Jorge Mario Bergoglio of Argentina and the fourth papal visit to the United States. The first three years of Pope Francis’ papacy have been astonishing. Catholics who cherished Vatican II never lost hope for a comeback but didn’t expect a Berlin Wall Moment either. Everything had been the same for decades but in the twinkling of an eye the new pope has opened the windows again as if they were a child’s eyes seeing the church and the world for the first time.

In truth, the church changed more in the 50 years since Vatican II than in the first 2,000 years -- just like everything else in the world. The future came yesterday and the rate of change is the blink of an eye. Today's cell phone is tomorrow's telegraph.

What hasn’t changed is the chosen part of things. What the poet Gerard Manley Hopkins called "the dearest freshness deep down things." The chosen part can never change because it is spiritual.

The chosen part is “the substance of things hoped for, the evidence of things unseen” (Heb.11:1). It is what we remember, what we cannot forget. It is Jesus touching a leper and watching him weep as the scales fall from his face. It is Papa John caressing a crippled man’s head and whispering in his ear and sharing his laughter. It is Francis embracing an invalid who looks like the Elephant Man and kissing his face. It is Jesus asking us to “be at peace” over and over again. It is Paul VI challenging the world: “No more war! War never again!” It is John Paul II saying, “Do not be afraid to take a chance on peace, to teach peace, to live peace. Peace will be the last word of history!” It is Francis saying, “If the church is alive, she must always surprise.”

I love this church and can’t wait to see what happens next!

[Michael Leach is publisher emeritus and editor at large of Orbis Books. He is the author of many books, most recently Why Stay Catholic? Unexpected Answers to a Life-Changing Question.]

People | The more things stay the same, the more they change

As lockdowns end, pope prays for prudence in behavior, judging others