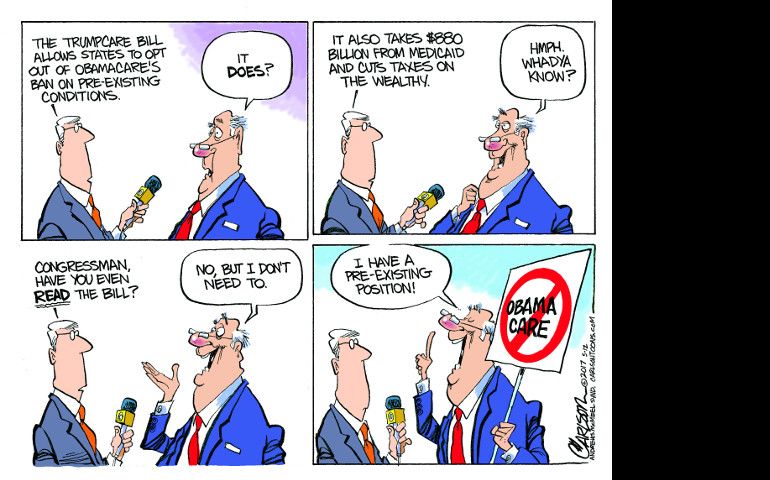 President Trump leaves the U.S. today for his first trip abroad as commander-in-chief. Here's the itinerary. All of NCR's coverage of the trip will be collected here: Trump Abroad. Here are some stories we've already run:

This is an op-ed shared around the NCR newsroom yesterday. One remark I over heard, "This is really scary." I wrote 'The Art of the Deal' with Trump. His self-sabotage is rooted in his past , by Tony Schwartz.

Netflix's "The Keepers" investigates nun's unsolved murder, a case tied to sex abuse, cover-up. Our media critic Sr. Rose Pacatte calls 'The Keepers' an outstanding series that integrates interviews and evidence to examine a story involving the murder of two young women nearly 50 years ago, sex abuse of minors on a devastating scale and possible cover-ups. Listen to Sr. Rose talk about "The Keepers" on NCR in Conversation, our new podcast.

"Roger Ailes isn't dead," writes Alexander Nazaryan in Newsweek. Ailes "lives on in Trump, sexual harassment suits and alternative facts." Watch Fox News for even a few minutes, and you'll plainly see that what Ailes wrought remains as healthy as ever.

Opioid overdose deaths exceed 50,000 a year in the U.S., and Fr. Frank Almade, a pastor in western Pennsylvania, does not want to preside over any more such funerals.

Signs of the Times: Witnessing to a Consistent Ethic of Solidarity, by Cardinal Blase Cupich

Pittsburgh — Parish groupings proposed All 188 current parishes in the Diocese of Pittsburgh, which include 225 church buildings, have been placed into 49 proposed groupings of parishes. The clergy and On Mission teams of volunteers recently reviewed the proposals in 21 district meetings.

Diocese of Lansing, Michigan — Details of a Michigan priest's 10-acre gated estate — a property at the center of an ongoing embezzlement investigation — have sparked questions on social media regarding his lifestyle and whether priests take vows of poverty.