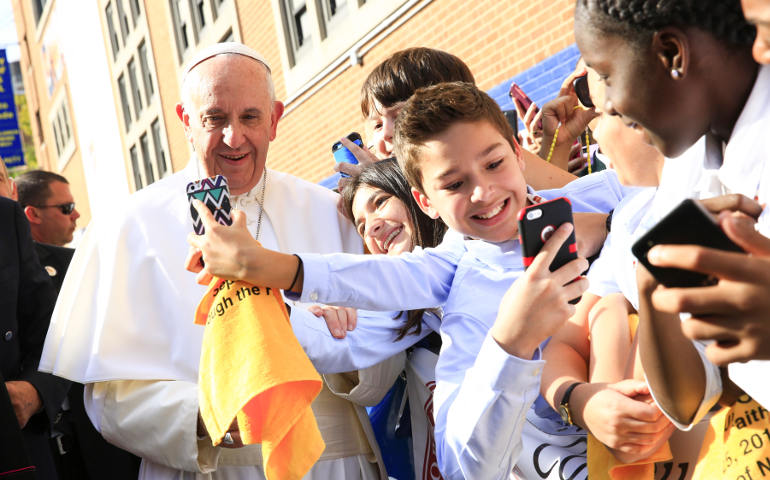 The lasting images of Pope Francis' barnstorm of the Northeast corridor won't violate one of the 10 Commandments by being graven; rather, they will be digital. Reviews of the trip will likely be highlight films bustling with faces, touches, scenes and acts of devotion, a swift, upbeat panoply of uplift.

If the recent past is indicative, not many will remember what he said. Marshall McLuhan told us that the medium of the visual was becoming the message itself, not just the vehicle that delivered the message.

There will be colossal parsing of the pope's words by media and religion analysts, of course, but chances that the wider public will pick up much more than the moving pictures are slim at best.

To start with, the public, Catholics included, generally don't know much specific about the church's traditions or even its major teachings, except for one or two that may impinge on their own lives, usually the sexually related ones. The New York Times has a new poll out showing pungent majorities of Catholics cheerful about the direction in which the pope is leading the church. The poll avoids the painful issue of whether Catholics have any idea whatever about any steps the pope has taken that points to a direction.

While the Times presumes the survey respondents are voicing an opinion based on facts, the truth is more nearly that they are responding to the pope's captivatingly warm images. With a friendly, approachable, humble leader like that how could anything be wrong with his direction? But in reality, the image of "progress" and "liberalism" far exceed any demonstrated agenda. Unless compassion, tolerance and mercy, which Francis bears in abundance, is itself the direction that is sweeping the church because of him.

The gargantuan coverage by the Times and other news outlets also springs from impression more than fact. He is a great news story in himself, to say the least, but the premise behind the huge volume of media attention is that he has shattered traditions and overturned staunchly conservative practices in pushing the church into some version of the 21st century. So far he has done nothing of the kind.

Media also respond instinctively to a conception of the pope that no longer exists among large portions of the faithful (or historically, inasmuch as their predecessors were real kings over real territory): that of a supreme authority on all matters of importance who steers their consciences and practices (the kind of far reaching power they yearn for and falsely attribute to the pope). He is seen anachronistically by them as the last "divine right" monarch who invites both disdain and romance. Francis flatly rejects such claims and pretense, but media project it on him nonetheless and make him a figure, like most celebrities lionized in its pages, larger than papal life itself.

Francis will leave the equivalent of a movie trailer that will string images of a crusading pope while the words he uses will either be lost in the ether or be captured in takeaway lines like Clint Eastwood's "make my day" or Scarlett O'Hara's "there's always tomorrow." There may be a comet like glow that warms parishes and inspires Catholics at least for a time, but former popes have left similar trails of memory that have faded. Meanwhile, the institution itself, holding fast to its embedded prescriptions, has continued to fade.

The recap of the trip will show what I have come to perceive as a charming scold who believes the ruling classes of America need conversion to values that foster the common good and turn aside from self-centered consumerism in the broadest sense. He became pope to change the church's reputation and has done a lot to accomplish that. The scandals that dominated Catholicism's image before he arrived have largely disappeared. He has put an enormously appealing face on a church in trouble as a leader who makes a mighty good impression. The highlight film of his journey will no doubt continue that momentum. As the lull sets in, quarrels over those overlooked words may become much stronger.

[Ken Briggs reported on religion for Newsday and The New York Times, has contributed articles to many publications, written four books and is an instructor at Lafayette College, Easton, Pa.]