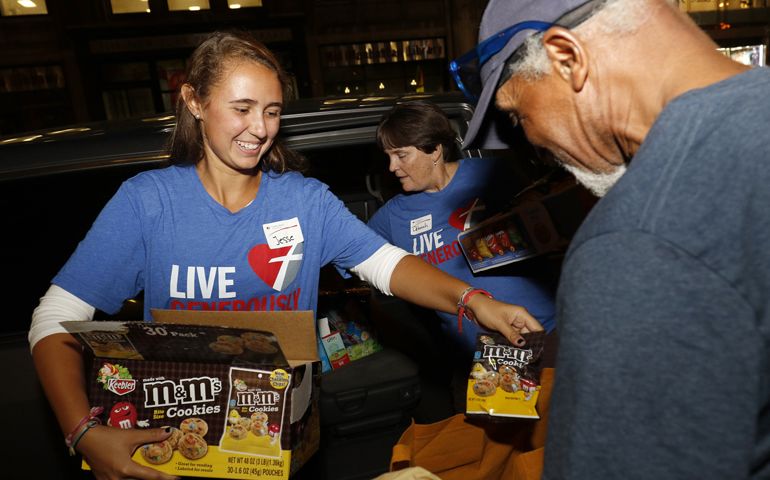 Jesse Damm hands a snack to a homeless man during a late-night visit by the youth group of Good Shepherd Church in Holbrook, N.Y., to New York City Aug. 26. (CNS/Gregory A. Shemitz)

When my husband Dan and I started dating, and we were getting to know each other, one of the first memorable things he said to me was: "You are generous to a fault."

I remember focusing my etch-glass laser Catholic lady stare on him. I had a bunch of retorts swimming in my head, such as: All my bills get paid first. My kids get fed and clothed first. I never give more than what is left over.

Because he was right, in a way. I sensed that trying to explain my compulsion to give stuff or money away would be complicated. It goes so deep in my Irish-Italian Catholic DNA, back through 16 years of Catholic school, it is as much a part of me as my eye color or loud laugh or need to drop off a lasagna dinner when someone is sick or hurt.

It is hard to talk about this, as it sounds like I am tooting my own horn, which is the opposite of what giving should be. But never fear: each and every kind act of my life seems to have been written by Woody Allen.

Something inevitably goes wrong. I am pretty sure God does this so we never get to feel too good about ourselves. I am always humbler and stupider after doing something nice. That's the deal, how I know all is right with the world.

In the 1969 movie "Take the Money and Run," Allen plays Virgil the bank robber who hands a hastily-written hold-up note to the teller. They quibble over whether the word is "Gun" or "Gub" … and the next scene finds Virgil in jail.

This is how all my acts of kindness invariably go.

But even knowing that I am bound at the very least to make a total fool of myself and at most, risk incarceration or some other disaster, I simply can't help myself.

The words from the song "Whatsoever You Do to the Least of my Brothers" — based on the passage from Matthew 25:31-40 — start repeating through me like a roll in a player piano, each time I encounter a chance to help.

It is undeniable, and takes me right back to first grade, on my knees, leaning on the altar railing at De La Salle church in Granada Hills, Calif., singing:

When I was hungry you gave me to eat

When I was thirsty you gave me to drink.

Now enter into the home of your father.

When I was homeless you opened the door

When I was naked you gave me your coat

Now enter into the home of your Father.

That and the song from the Prayer of St. Francis — "Make Me a Channel of your Peace" — do me in, every time.

For example, once I was walking from the parking lot to my office on a snowy day. I was wearing a warm knitted cap, scarf and mittens. I had a couple of extra pairs of those cheap $2 mittens from the drug store in my backpack. I kept a whole drawer of them at home, as my three kids were forever losing them.

I saw a woman walking across the street from me, without a coat, wearing a light cotton dress and only a tied bandanna on her head. Her bare hands were bright red.

No brainer, right? I had three pairs of mittens, she had none. Duh. Roll song.

I crossed the street, digging in my backpack as I went, then stood in front of the lady, holding out a pair of mittens, with a big cheesy smile on my face. Only then did I become aware that she was a recent immigrant from somewhere in Eastern Europe. Her eyes were huge with alarm, and she waved me off, her hands pushing me away.

I insisted, pushing the mittens at her.

Via our horrible mix of English and what I took to be Russian, I somehow figured out that she thought I was accusing her of stealing the mittens.

I pushed them back at her. "No, no, no. These are YOUR mittens! Take them!"

She was nearly hysterical now, looking around for help. Her face clearly telegraphed: "Someone save me from the Insane Mitten Lady!"

Exasperated, I threw the mittens at her. She caught them. I ran as fast as I could across the street, not looking back, ducking into my office building. Welcome to my charitable world.

Or another time, I was walking to the same building and saw a homeless lady sleeping on the lawn, her body partially covered by a blue plastic tarp. The only way I knew she was under there was that one of her hands and some of her gray curly hair stuck out, laying on the damp grass. Again, there goes the music.

I leaned over and tried to slip a $5 bill under the tarp near her limp hand. Suddenly, her dry bony hand grabbed my wrist. She reared out of the tarp like a skinny lion, screaming in my face, accusing me of trying to steal the money from her. I stumbled backwards, untangling our hands, and fell backwards on the wet grass.

Green grass stain down the entire leg of my work pants, check. Angry homeless lady, waving a $5 bill and screaming obscenities at me as I trudge back to my office, check. Another great moment in charity land.

And while I think he meant to sound worldly and cynical, I have to agree with him — but in a good way.

The point, I hope, is that these moments are not about making me feel better. They are about doing what we can, even when we know it will result in a crazy comedy of errors.

Years ago, I lifted something too heavy on the job and hurt my neck. It took labor and industries a full year to acknowledge that I was not only really hurt — and not faking it — but needed surgery. I was in teeth-chattering pain, my left arm didn't function well, and I could only work about half of the day before I fell asleep on my desk from exhaustion.

Pretty soon, I had used up all my sick leave. I was a single mom with three little kids, and we were limping along on half pay. It was terrifying. And lonely. And desperate.

That Thanksgiving and Christmas, I cried tears of relief when the local Christian church delivered charity boxes to our front porch. Without them, there was no way I could have provided holiday meals for my kids.

My two boys Nick and Duncan were oblivious about from where the sudden gush of groceries came, but my teenaged daughter Chelsea was mortified. She begged me to hide the gift-wrapped boxes of food in our garage, so her friends wouldn't see.

After I recovered from my neck surgery the following spring, I told my kids that from now on, we would always adopt families during the holidays. It was a tangible way to say "thank you" for the generosity that had so helped us, and pay it forward.

But that first Christmas, when my kids and I delivered the wrapped gifts and boxes of groceries to our adopted food bank family, they acted anything but grateful. The mother actually asked us for more money (which I did not have), and better presents.

We piled back into our van, the boys in the back seat, Chelsea in the front with me. As we were driving home, she said: "Well, that is the last time we are doing that!"

She folded her arms. "They were totally ungrateful and mean to us!"

I reached over and touched her leg. "Do you think maybe that Mom was embarrassed?"

I lightly squeezed her leg. "I mean, she never thought she would need to be given charity boxes to give her kids food and gifts? I never did, Chelsea. But it sure happened to us, right?"

"I was embarrassed, too. I thought I would always be the one giving those boxes away, not getting them, you know? But stuff happens. She might feel the same way."

"But," Chelsea's face showed confusion, "You weren't mean when we got that stuff last year."

I nodded, putting my hand back on the steering wheel. "True. But if there is one thing I have learned about giving, it very rarely is about how good it makes you feel. It is about doing the right thing. Even when it makes you feel mad or bad, yes?"

She smiled then. We both did.

One day, I was out walking with son Nick. As we started across the street at a crosswalk, we almost literally bumped into our neighbor in his van, waiting to turn right. He had his three little kids in the backseat. He rolled down his window to say hello. When I saw his haggard face, I asked what was up.

He explained that he had been hurt on the job, and was awaiting back surgery. He wasn't working much, and was just driving his kids around, trying to give them something to do and cheer them up.

I squeezed his forearm and told him to hang in there.

Nick and I walked back to our car. I drove straight to the market, and no surprise, bought a frozen lasagna, a bag of Caesar salad and a big loaf of garlic bread. I dropped the bag on our friend's front porch on our way home. I sent him a quick text message, alerting him to check on his porch before dinner time.

As we pulled into our driveway, my cellphone lit up with a text message.

The next text said: "There isn't anything on our front porch."

I wrote back: "What? That's weird. I just left it there."

I looked up at the sky, and smiled.

I texted back, asking for their new address.

I understood fully that I was about to turn around, go back, collect the bag (if it was still there) from a total stranger's front porch, buy a new bag of groceries if it wasn't there, then deliver it to the correct address.

And I knew, without a doubt, that all was right with the world.

Lent is a good time to tackle the challenge of forgiveness