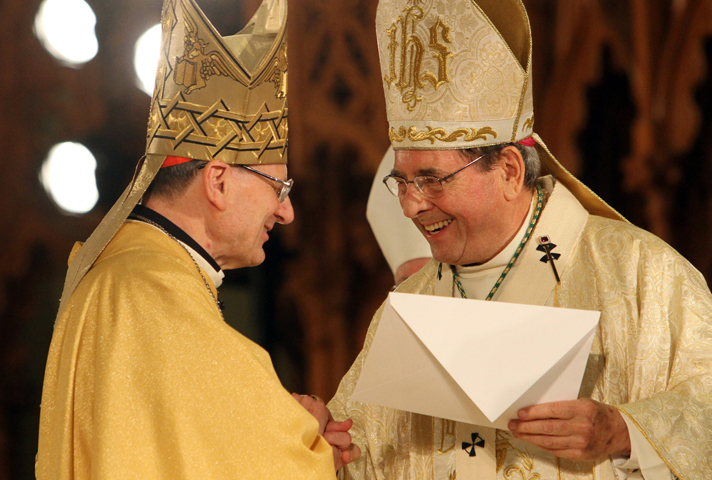 If the ideal Catholic parish is, as Pope Francis describes it, a field hospital for the wounded, Archbishop John Myers of Newark, N.J., thinks it should include some triage.

In a Sept. 22 letter to pastors, the archbishop reviewed who is welcome to Communion in the four counties in northeast New Jersey that comprise the archdiocese.

"The Church will continue to cherish and welcome her members and invite them to participate in her life to the degree that their personal situation permits them honestly to do so," Myers said in the document, titled "Principles to Aid in Preserving and Protecting the Catholic Faith in the Midst of an Increasingly Secular Culture."

The statement said that Catholics "must be in a marriage regarded as valid by the Church to receive the sacraments." It added, "any Catholic who publicly rejects Church teaching or discipline, either by public statement or by joining or supporting organizations which do so, are not to receive the sacraments. They are asked to be honest to themselves and to the Church community."

Myers' statement engendered some scathing comment in The Star-Ledger, the largest local daily, including a letter writer who wondered whether the archbishop himself should be welcomed to Communion as long as he plans on retiring to a house with recently added $500,000 renovations when he hands over the reins to co-adjutor Bishop Bernard Hebda, an event expected next summer. Newark priests contacted by NCR indicated, however, the letter has had little pastoral impact.

"Most people aren't aware he sent it out," said Fr. Warren Hall, associate pastor at Sts. Peter and Paul Church in Hoboken and St. Lawrence Church in Weehawken. Hall was removed this year by the diocese from his campus ministry position at Seton Hall University after he posted a statement on social media favorable to gay rights.

"I don't think the average person in the pew has been affected by it," said Hall, who thought the timing of Myers' letter, coming soon before the papal visit to the United States and the Synod of Bishops on the family, worked against the goal of reaching out to alienated Catholics who might be giving the church a second look.

"We are all sinners," said Hall, summarizing what he said was Francis' emphasis. "We are all on the road to living as Jesus wanted us to. But all of us fall short."

Msgr. William Reilly, pastor of Most Holy Name Parish in Garfield, said the letter had little impact on his mostly Spanish-speaking community.

"To me it was a non-issue,he said, noting that Myers was repeating what had previously been stated in documents from the U.S. bishops.

When it comes to who can receive Communion, and who can't, his parishioners generally are respectful of church regulations, said Reilly. "I don't delve into people's consciences," the pastor said. He says much of his work involves preparing couples to regularize long-term relationships in the church, either by those who were married civilly or are cohabiting.

James Goodness, spokesman for the archdiocese, said the document was misinterpreted by a hostile local media. Myers, he said, is on board with the pope's emphasis on evangelization. The archbishop has been publicly supportive of the pope's effort to streamline the annulment process and reach out to women who have had abortions, for example.

The timing was coincidental with the papal visit. Any suggestion to the contrary, said Goodness, "is bull."

"The statement was a set of principles that priests should be looking at and keeping in mind as they walk with people in varying circumstances," said Goodness. He added the statement came in response to pastors asking the archbishop for guidance "to find out how we can walk with people within the confines of church teaching."