Last week Newsweek published a cover story from veteran Philadelphia journalist Ralph Cipriano that dives even deeper into the credibility of an alleged victim of clergy sexual abuse that resulted in landing three priests and one teacher in prison.

In June 2012, Msgr. William Lynn became the first U.S. church official convicted for his handling of abuse allegations. Seven months later, a jury found Fr. Charles Engelhardt and Bernard Shero guilty sexually assaulting a former altar boy, the same whom former priest Edward Avery had previously pleaded guilty of sexually assaulting. The altar boy at the center of each of the four convictions was “Billy Doe,” the prosecution’s star witness in an apparent landmark trial situated in the Philadelphia archdiocese. 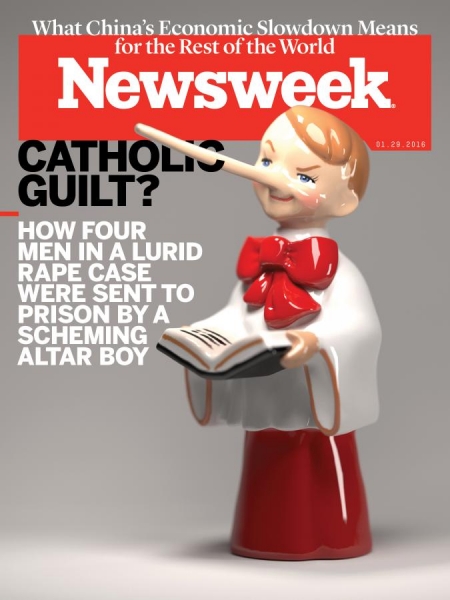 Flash forward to last week. Under the scathing headline “Catholic Guilt? The Lying, Scheming Altar Boy Behind a Lurid Rape Case” Cipriano recaps for Newsweek the priests’ cases and the credibility of Billy Doe -- whose actual name is Daniel Gallagher -- in addition to revealing new information from recent reports, gathered ahead of civil suits that have since been dropped, that raises new questions about the reliability of his story.

A psychiatric evaluation conducted in October described Gallagher in the following way:

"The client is apparently immature and self-indulgent, manipulating others to his own ends…. He refuses to accept responsibility for his problems. He may have an exaggerated or grandiose idea of his own capabilities and personal worth. He is likely to be hedonistic and may overuse alcohol or drugs. He appears to be quite impulsive, and he may act out against others without considering the consequences…. Paranoid features and externalization of blame are likely to be present…. His manipulative and self-serving behavior may cause great difficulties for people close to him…. An individual with this profile is usually viewed as having a Personality Disorder, probably a Paranoid or Passive-Aggressive Personality. Symptoms of a delusional disorder are prominent in his clinical pattern."

In a January 2015 deposition, also obtained by Newsweek, a retired Philadelphia detective said when he asked Gallagher about inconsistencies in his story, he either said nothing, claimed he was high or told a different story.

The full Newsweek story can be read here and is also included in the Jan. 29 print issue.

Since the conclusion of Lynn’s trial in June 2012, Cipriano has reported for NCR on the continued appeals brought by the priests as well as the veracity of Gallagher’s story, beginning with an April 30, 2013 analysis of the former altar boy’s drug history and inconsistencies in his testimony.

In that lengthy exposé, Cipriano wrote at one point:

"It's a real credibility contest here: on one side, Doe, the drug-addicted criminal; on the other, [Edward] Avery, a priest who moonlighted as a disc jockey and had a history of molesting young boys. Here's the difference: Avery, as despicable as he is, was thoroughly vetted, and he told the same story since day one at risk of his own self-interests. Doe has never been vetted. He has everything to gain legally and financially by telling his varying versions of his story."

As we face this abuse crisis, be prophetic and speak out