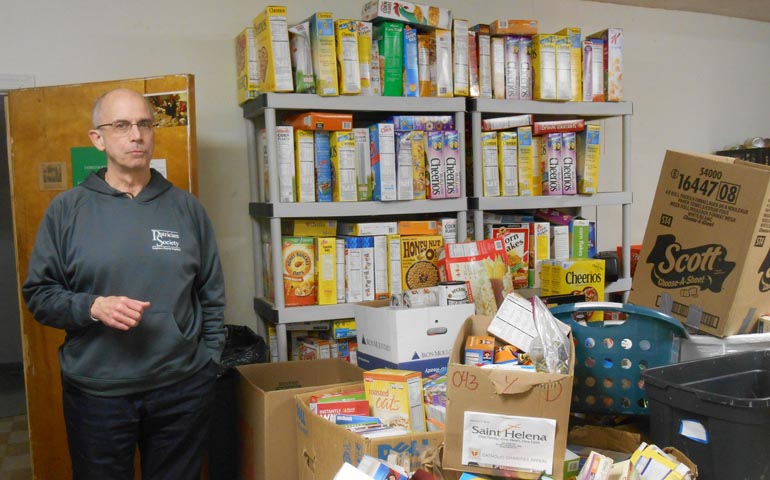 A giant statue of the Irish patron stands atop St. Patrick's Church in this gritty city's downtown, beckoning to immigrants as it has done ever since the church was built in 1907. These days, it is more popularly referred to as San Patricio.

This parish, founded by Irish immigrants in 1835, is now a magnet for Latino immigrants, filling three Spanish Masses in the church each weekend, plus two in English. More come on popular feast days like that for Our Lady of Guadalupe, as the church parking lot and neighborhood streets overflow with worshipers. Good Friday includes a vivid recreation of the Passion, performed on the streets, with a Jesus beaten and abused in dramatic style.

St. Patrick's remains a different kind of parish from its neighbors, located in a pocket of poverty amidst Montgomery County, the wealthiest in Pennsylvania, six miles from the Philadelphia city line. Norristown is a former factory town long populated by Irish and Italian immigrants; today, 80 percent of the parish population has roots in Latin America, many of them recent immigrants from the Puebla region.

"I live in the 1950s," Fr. Gus Puleo, the pastor, tells NCR. "Whatever problems they have they come to the priest."

Many of those problems revolve around immigration. It's not uncommon for local police to stop traffic around the church, seeking immigrants who are driving without a license (those without documentation cannot legally drive in Pennsylvania).

When that happens, the word goes out to avoid the downtown streets. When they are caught, undocumented drivers have their cars confiscated and pay hefty fines, sometimes up to $2,000.

"People are afraid. They live in the shadows. They look over their shoulders," says Puleo.

Other institutions make his parishioners wary, says the priest, a former Spanish professor at Columbia University in New York, who returned to this, his hometown, after being ordained for the Archdiocese of Philadelphia.

Immigrants find friends and support at St. Patrick's, often through a non-profit organization called the Patrician Society, founded by the late Fr. Gerard D. McCaffrey in 1981, a former pastor. McCaffrey wanted to help the poor who regularly came to the rectory door seeking help.

The Patrician Society is officially non-sectarian and is housed in the parish's former elementary school, next to the church. For the people it helps, and those who offer that assistance, the line separating the group from the parish is frequently blurred.

With a budget of $175,000 per year and support from private and governmental sources, the society provides a wide array of programs to all who seek help, including:

English as a second-language classes. Puleo, a former language professor, has also added Spanish classes for English speakers as a service to those who work in Norristown's health facilities and government agencies, where knowledge of Spanish is imperative.

College prep classes. In a country where more privileged youngsters receive tutoring and active assistance from parents (who have been known to write college admission essays), Puleo knows "the field is not even" for immigrant children.

A place for union meetings for domestic workers who toil at local hotels.

AA meetings in Spanish (the parish is host for a national gathering of AA in Spanish every year).

Joseph Maccolini, director of the Patrician Society for more than 34 years, notes that the agency has the largest food pantry in the county. It is the grateful recipient of donations of time and money from those in more affluent parishes.

Nearby, in another parish building, the Missionary Sisters of Charity, the community founded by Mother Teresa, operates a shelter for women and a lunch program. The sisters also teach catechism to some of the 500 religious education students.

While Masses are crowded, collections remain small -- there is not much income among the immigrants -- but the church is subsidized in part by a parish cemetery. "It's the dead taking care of the living," says Puleo.

Relatively few immigrant families formally register in the parish. Parish registration is a practice unknown in Mexico and most of Latin America. Many undocumented families prefer not to sign registration forms. But the pace rarely slackens, says Puleo. Last year, the parish baptized 275 babies and children.

While a parish old in years and established in tradition, St. Patrick's (San Patricio) remains a young, vibrant community, ready as a beacon reaching out to newcomers, notes Puleo.