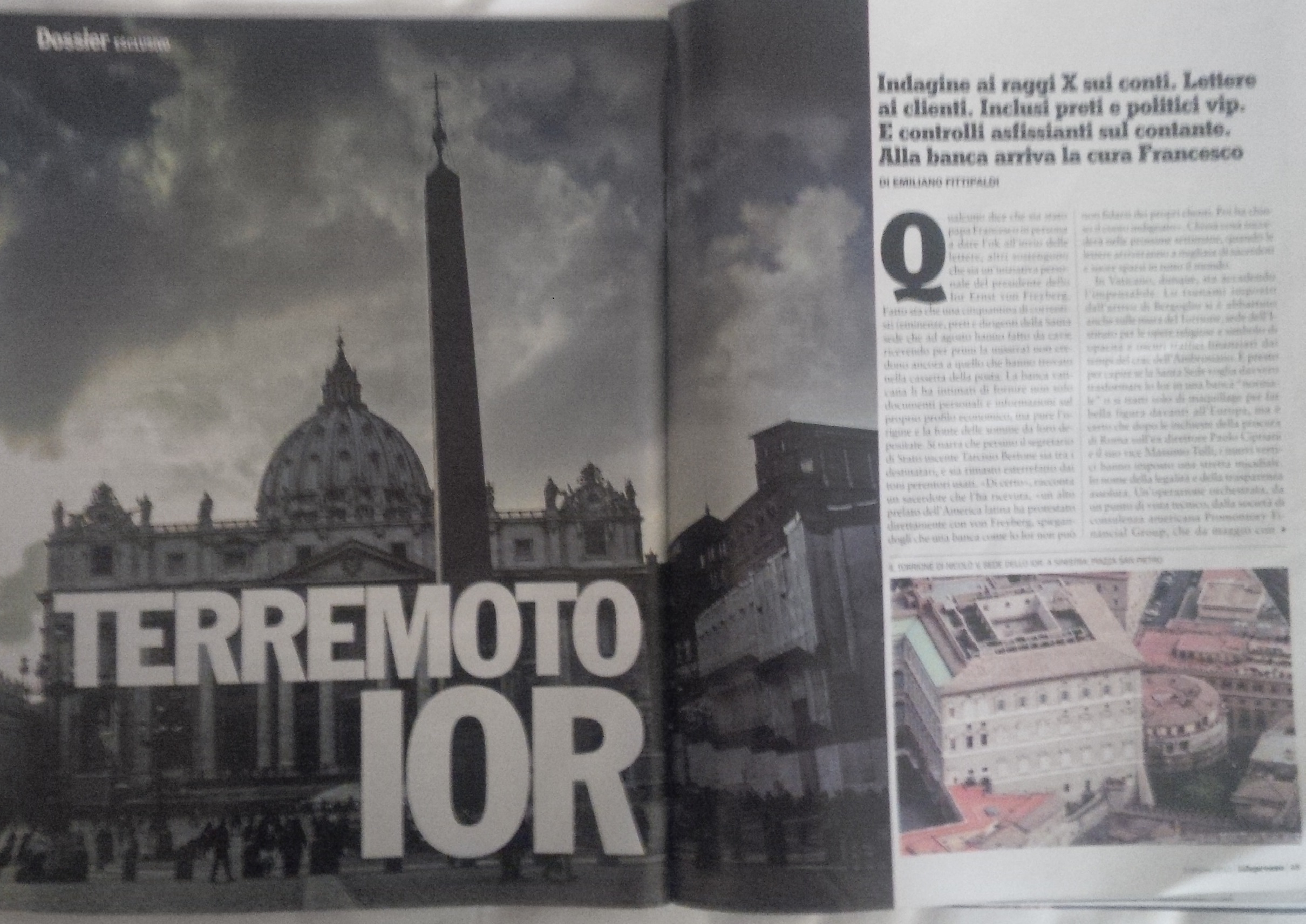 "Earthquake at the Vatican Bank," a story in the Oct. 3 edition of l'Espresso

Steamy magazine exposés are rarely good news for the people or institutions featured in them. That's probably especially true for the troubled Vatican bank, which over the years has been the church's premier magnet for conspiracy theories and scandals of every imaginable sort.

On Friday, however, the bank finally caught a break.

There was yet another gossipy piece in an Italian newsmagazine, in this case l'Espresso, featuring ominous storm cloud art, which was full of unnamed sources describing an "earthquake" related to the bank. (The place is technically the "Institute for the Works of Religion," often referred to by the Italian acronym IOR.)

Immediately after it appeared, the piece had phone lines buzzing inside the Vatican, in part because after last summer's leaks scandal, the perception that insiders are spilling the beans to reporters usually means going to Defcon 1.

Yet despite the melodramatic flourishes in the piece, its overall effect is probably to burnish, rather than erode, the bank's new image.

That's because the "earthquake" to which the title refers is a growing sense of shock that bank officials aren't just talking about transparency, but actually implementing it – beginning with insisting that Vatican personnel, including those at the very top of the food chain, explain where the money they have parked at the bank comes from and what they're doing with it.

"In the Vatican, the unthinkable is happening," the article reports. "A deadly tightening up has been imposed … in the name of legality and absolute transparency."

For most outsiders, the application of tighter controls probably seems less unthinkable than long overdue. Aside from its checkered historical past, such as the celebrated scandals involving Roberto Calvi and the Banco Ambrosiano in the 1980s, the IOR has recently stumbled through a series of embarrassments:

At a time when Pope Francis has signaled a desire for serious reform in Vatican structures, the cumulative effect of these scandals has been to lead some senior churchmen to openly ask whether the bank is an anachronism and ought to be shut down.

In that context, the bottom line for the bank's new administration under German President Ernst von Freyberg, a veteran businessman and financier, would seem to be crystal clear: reform or die.

Judging from the l'Espresso piece, it would seem they've embraced the former.

The basis for the report is the detailed inspection currently being performed at the bank by the U.S.-based Promontory Financial Group, a risk management and regulatory compliance consulting firm founded by a former U.S. Comptroller of the Currency. It was hired by von Freyberg, with the idea of finishing the work of reviewing every client's data by the end of the year.

Promontory currently has about twenty inspectors stationed inside the Vatican bank. They've set up shop in what used to be the cavernous office of the president, turning the space into what seems at first glance to resemble an air traffic control room – full of people staring intently at computer screens, making technical observations to one another, and ignoring anyone else who happens to flit in and out.

Their task is to pour through records for each of the 18,900 clients to make sure that proper documentation is on file and that the paper trail for transactions is clear, as well as signaling any suspect movement of money – such as, to take a hypothetical for-instance, a Vatican employee whose salary is theoretically 20,000 Euro a year, but who's regularly making deposits in the six figures.

As part of that project, letters went out in August to Vatican bank clients whose files in one way or another were incomplete, or where there were questions about the origin and destination of funds, asking them to supply the missing information. The idea is to build a full profile for every one of the 18,900 clients, which includes roughly 13,700 individuals and 5,200 institutions such as religious orders and dioceses. Roughly 85 percent of the $9 billion in assets the bank has under management belong to those institutions.

In a culture inside the Vatican that's long run on trust and personal relationships, the new emphasis on accountability has set off shock waves, and left some old-timers grumbling about a "witch hunt."

The l'Espresso piece is full of insider complaints that lines have become too long at the bank, for instance, because people now have to fill out a form explaining what they're doing with their money. One source grumbled that if this "police mentality" keeps up, some people may close their accounts and move their money to other banks.

To be sure, there are elements in the report of dubious accuracy.

For instance, the story asserts that earnings at the IOR may be down this year because the bank has had to issue loans to cover big losses in two European dioceses – Terni in Italy, currently running a deficit of roughly $27 million, and Maribor in Slovenia, where the diocese faces a debt of $50 million.

The problems in Maribor stem from the diocese's relationship with a pair of investment societies that speculated in real estate, telecommunications, and even a TV outlet that broadcast soft-core pornography. The total black hole left behind after the collapse of those companies is estimated at more than $1 billion.

On background, however, IOR officials told NCR that part of the l'Espresso account is not true.

First, they say, the bank has indeed made a $16 million loan to Terni, at the direct request of Pope Francis, but they say it has not given any money to Maribor because, at least so far, the pope hasn't told them to do so.

Even the Terni loan, they say, doesn't have anything to do with present-year earnings. It's "Banking 101" that a loan is not reported as a loss in the year in which it's made; if it not's recovered within the specified life of the loan, say five or ten years down the line, then it goes in the debit column.

What's more directly relevant to this year's profits, officials say, is the state of the bond market, especially government bonds, which is where the bulk of the bank's assets is invested. Lower bond values, especially in the Eurozone, mean lower earnings.

The bank is set to release a detailed annual report on Tuesday, the first time in its history that it's made such a statement public.

Such details aside, the overall impression given in the l'Espresso story seems accurate: A new day is apparently dawning at the bank, where the old climate of trust is being leavened with a strong new dose of "but verify."

That may have noses out of joint among old-timers used to handling things informally, with a wink and a nod, but to most outsiders, this may be the most encouraging thing they've read about the Vatican bank in a long time.