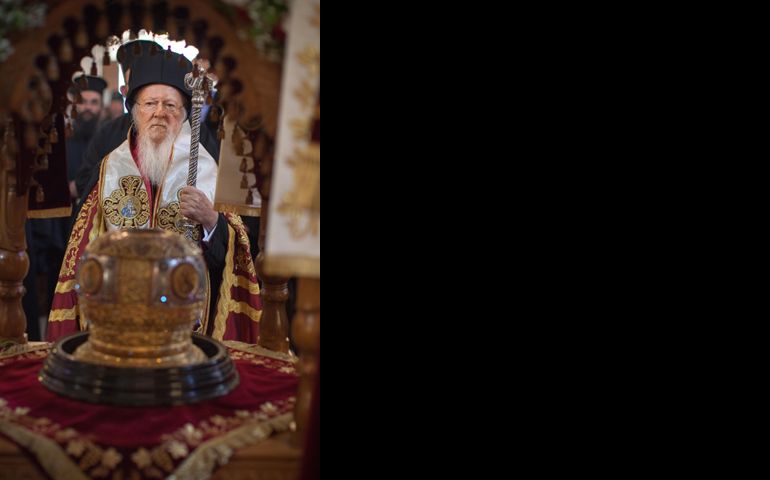 Ecumenical Patriarch Bartholomew of Constantinople celebrates Vespers of Pentecost in the Church of St. Titus in Heraklion, Greece, June 18. The Great and Holy Council of the Orthodox Church opened the following day. (CNS/Sean Hawkey, handout)
This article appears in the Pan-Orthodox Council feature series. View the full series.

Orthodox leaders, meeting in Crete, have adopted a declaration on Orthodoxy's mission in the modern world, despite tensions caused by the withdrawal of several churches from the historic gathering.

"There've been so many developments and changes, especially in recent decades -- political, social, scientific -- that our church can no longer stay outside or on the periphery," said Archdeacon of the Ecumenical Throne of Constantinople* John Chryssavgis, spokesman for the Istanbul-based Ecumenical Patriarchate. "It needs to deal with issues such as bioethics, climate change, human rights and discrimination -- taking them seriously and embracing them in an inspiring, prophetic, constructive and consoling way."

The priest was speaking at a June 21 press briefing after a second day of closed-door debates at the Holy and Great Council, attended on the Greek island by 170 bishops and metropolitans from 10 separate Orthodox churches. He said Orthodox churches could "add a unique perspective" to contemporary discussions by drawing on its spiritual traditions, while also "articulating new answers, not repeating the old ones."

Meanwhile, another Orthodox spokesman, Archbishop Job Getcha of Telmessos, said consideration was being given to calls for a "new institution," which would convene at five-yearly intervals to ensure the Council's decisions were "received throughout the Orthodox world."

He added that the proposal had been made last January by the head of Romania's Orthodox church, Patriarch Daniel Ciobotea, and repeated on June 20 by Archbishop Chrysostomos II of Cyprus.

The week-long Council, widely believed the first on such a scale for more than a thousand years, is currently in session at Kolymbari in Crete, despite a walkout by the Patriarchate of Antioch and Orthodox churches in Georgia and Bulgaria and Russia.

The 4400-word declaration, "Mission of the Orthodox Church in Today's World," said Orthodoxy shared "the concern and anxiety of contemporary humanity with regard to fundamental existential questions," and would help "eradicate fanaticism of every kind, and establish reconciliation among peoples."

It added that freedom was "one of God's greatest gifts" and could bring human beings to "spiritual perfection," while also carrying "the risk of disobedience as independence from God."

Among contemporary "consequences of evil," the document listed secularism, racism and "moral laxity," and the oppression of social groups and religious communities, as well as "manipulation of public opinion," social inequality, mass hunger, forced migration, human trafficking and environmental destruction.

"The Orthodox church confesses that every human being, regardless of skin color, religion, race, sex, ethnicity and language, is created in the image and likeness of God, and enjoys equal rights in society," the declaration continued.

"In these times of secularization marked by a spiritual crisis characteristic of contemporary civilization, it is especially necessary to highlight life's sacredness. The misunderstanding of freedom as permissiveness leads to an increase in crime, the destruction and defacement of those things held in high regard, as well as the total disrespect of our neighbor's freedom."

The document said the financial crisis had widened the gap between rich and poor, and led to "perverted business practices devoid of justice and humanitarian sensitivity," adding that the mass media was often controlled by an "ideology of liberal globalization" into "disseminating consumerism and immorality."

It said Orthodoxy's mission included promoting "the universality of principles of peace, freedom and social justice," adding that the church condemned "war in general," especially when provoked by religious fanaticism or "inspired by nationalism and leading to ethnic cleansing, violation of state borders and seizure of territory."

Ecumenical Patriarchate sources said the declaration had been approved with "very small changes," adding that a series of amendments opened for discussion in March by the Greek Metropolitan Hierotheos Vlachos of Nafpaktos, a leading conservative, had been unanimously rejected.

Five other declarations are expected to be approved by the Council -- on Orthodox diaspora affairs, church autonomy, fasting, marriage and ties with other Christian churches.

Speaking at the June 21 press briefing, Chryssavgis said it had been agreed that all Council decisions would be made by consensus, rather than majority vote, to enable smaller churches to feel equally represented.

Meanwhile, an adviser to Romania's Orthodox Patriarchate, Ionut Maurice, said the adopted declaration had "great importance" as the first attempt by Orthodox churches "to approach the problems of modernity in a conciliar and synodal way."

He added that debates on the document had been "full of emotion and empathy," and had ranged "from metaphysics to poverty."

"Our church can't resolve all problems at once -- but with this declaration, it has started to put normality into practice," Maurice said. "Some people have tried to frame conciliarity and synodality in a quantitative form. But the voice of this Council will represent Orthodoxy, even if some member-churches have stayed away."

Each Orthodox church is permitted to bring 24 representatives to the Crete meeting, although only two -- the Ecumenical Patriarchate and church of Albania -- have included any women in their delegations.

*This story has been updated to correct John Chryssavgis' title.

After COP22, the importance of sub-national groups