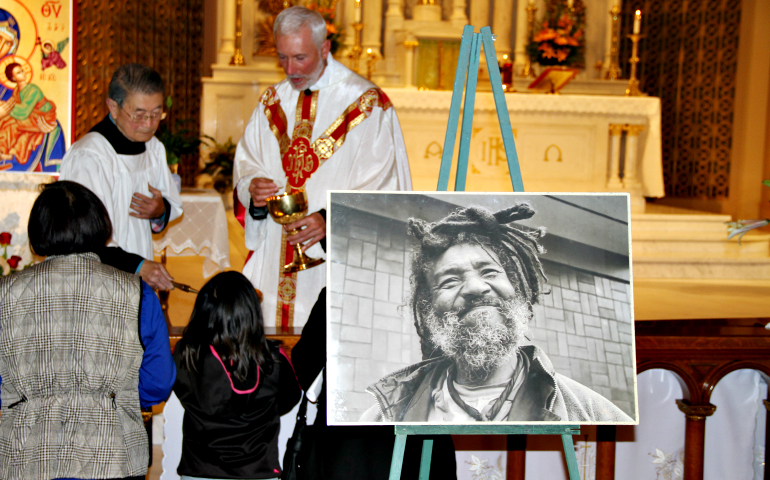 Mourners receive Communion from Fr. Joseph Illo, pastor of Star of the Sea Church in San Francisco, during a Nov. 7 funeral Mass for Thomas Myron Hooker, a homeless man pictured in a portrait near the altar. (CNS/Catholic San Francisco/Christina Gray)

Hundreds gathered at San Francisco's Star of the Sea Parish on Nov. 7 to pay tribute to a homeless man whom many had known for years. Eulogized as "a kind of patron saint of the homeless" by pastor Fr. Joseph Illo, Thomas Myron Hooker "lived the last 20 years of his life without a roof over his head, but his death proved he was hardly without a home," reports Christina Gray in Catholic San Francisco. Hooker died in late October. He was one of three individuals profiled in a documentary about mental illness called "Voices." Gray writes, "In the trailer for the documentary, Hooker says with a huge grin: 'I suffer a lot, you know, and when you suffer, you must know to be kind.' "

Seminarian Jesus Mariscal of the Yakima, Wash., diocese was one of seven finalists for Catholic Extension's prestigious Lumen Christi Award, nominated for his efforts on behalf of the migrant farm community. A former migrant laborer himself, the Mexico native told the Yakima Herald-Republic that he was "humbled" by Catholic Extension's nomination and shared that his path toward priesthood began with an invitation from Yakima Bishop Joseph Tyson several years ago. Mariscal was engaged to be married at the time. He is studying at the Pontifical North American College in Rome.

Parishes, schools, Catholic Charities and other Catholic groups are pitching in to aid victims of the wildfires and tornado that struck Tennessee in late November. The staffs of Sacred Heart Cathedral and Sacred Heart Cathedral School in Knoxville, for example, are overseeing a food drive for victims. A special collection was held throughout the diocese Dec. 3-4, and an assistance fund for online donations was established. St. Mary Parish in Gatlinburg was spared, but barely.

Members of Msgr. Adam A. Micek Knights of Columbus Council 8410, based at Mary Mother of God Parish in Harrison, Ark., and its mission church, St. Andrew in Yellville, recently collected nearly 100 cellphones in support of Hopeline, a Verizon project addressing domestic violence.

Joanne Blaney, a member of St. Mark the Evangelist Parish in Harlem, N.Y., reflects on her two decades as a Markyknoll Lay Missioner in a Catholic New York profile by John Woods. A former inner-city educator in Philadelphia and Washington, D.C., Blaney has worked extensively in restorative justice — having lectured, taught and written on it. Blaney currently directs mission services for Maryknoll Lay Missioners.