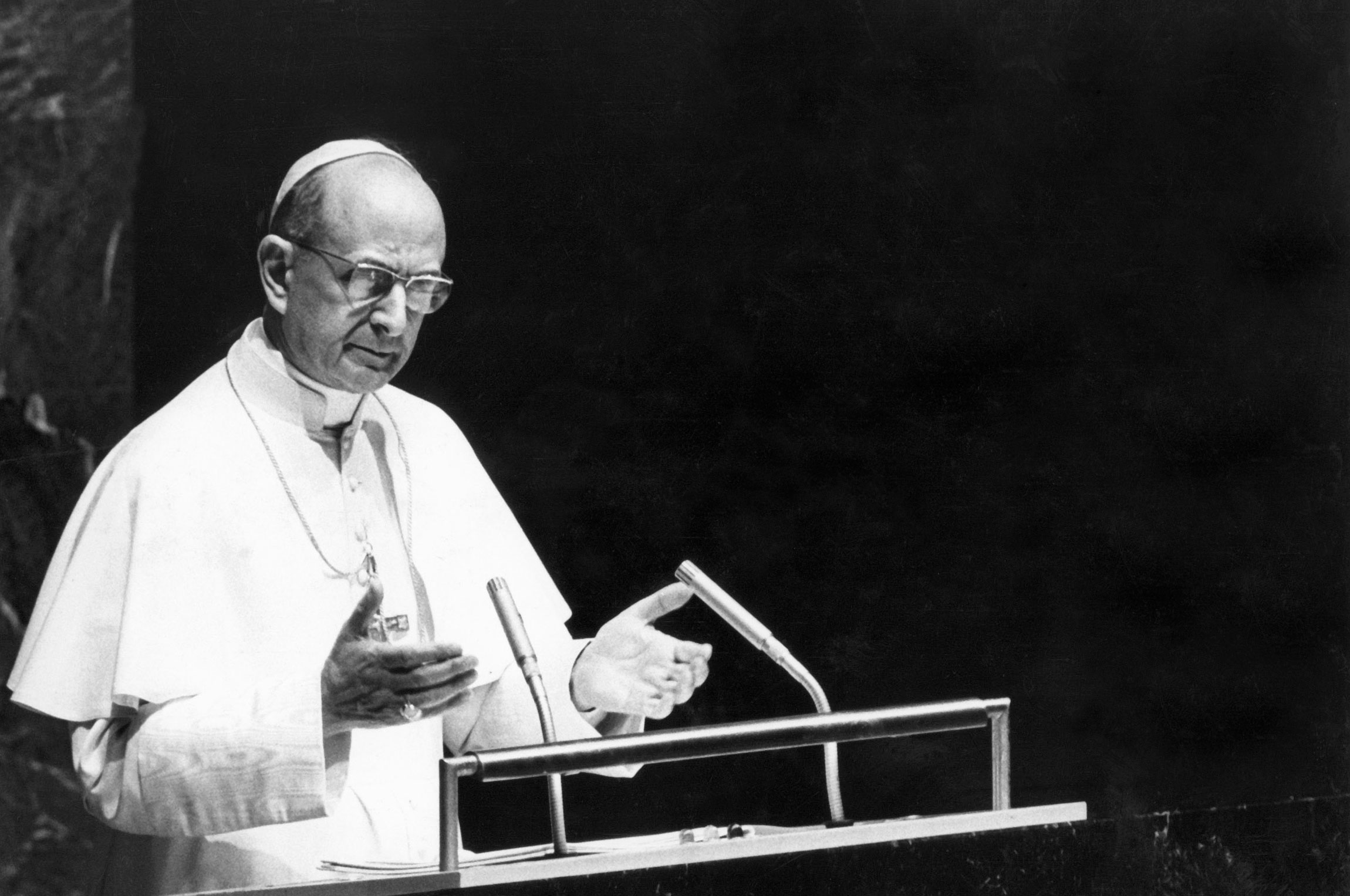 On this day 50 years ago Pope Paul VI became the first pope to visit and address the United Nations.

Peacemaking was not incidental to Paul VI’s talk that day; it was at its heart. The following is taken from that historic address.

And now We come to the high point of Our message: Negatively, first: the words which you expect from Us and which We cannot pronounce without full awareness of their gravity and solemnity: Never one against the other, never, never again. Was it not principally for this purpose that the United Nations came into being: against war and for peace? Listen to the clear words of a great man, the late John Kennedy, who declared four years ago: "Mankind must put an end to war, or war will put an end to mankind." Long discourses are not necessary to proclaim the supreme goal of your institution. It is enough to remember that the blood of millions of men, numberless and unprecedented sufferings, useless slaughter and frightful ruin are the sanction of the covenant which unites you, in a solemn pledge which must change the future history of the world: No more war, war never again. It is peace, peace which must guide the destinies of peoples and of all mankind. Our thanks to you, glory to you, who for twenty years have labored for peace and who have even suffered the loss of illustrious men in this sacred cause. Thanks and glory to you for the conflicts, which you have prevented, and for those, which you have brought to an end. The results of your efforts on behalf of peace, including the most recent, even if they are not yet decisive, are such as to deserve that We, presuming to interpret the sentiments of the whole world, express to you both praise and gratitude.

Gentlemen, you have performed and you continue to perform a great work: the education of mankind in the ways of peace. The United Nations is the great school where that education is imparted, and We are today in the Assembly Hall of that school. Everyone taking his place here becomes a pupil and also a teacher in the art of building peace. When you leave this hall, the world looks upon you as the architects and the builders of peace. Peace, as you know, is not built solely by means of politics and the balance of forces and of interests. It is constructed with the mind, with ideas, with works of peace. You labor in this great construction. But you are still at the beginning of your labors. Will the world ever succeed in changing that selfish and bellicose mentality which, up to now, has woven so much of its history: It is hard to foresee, but it is easy to affirm that it is toward that new history, a peaceful, a truly and fully human history, as promised by God to men of goodwill, that we must resolutely set out. The roads lie well marked before you; the first one is that of disarmament.

If you wish to be brothers, let the weapons fall from your hands. One cannot love with offensive weapons in his hands. Those weapons, especially the terrible weapons that modern science has given you, long before they produce victims and ruins, cause bad dreams, foster bad feelings, create nightmares, distrust and somber resolves; they demand enormous expenditures; they obstruct projects of solidarity and useful work; they falsify the very psychology of peoples. As long as man remains that weak, changeable and even wicked being that he often shows himself to be, defensive arms will, unfortunately, be necessary. As for you, however, your courage and your work impel you to study ways of guaranteeing the security of international life without recourse to arms. This is an aim worthy of your efforts; this is what the peoples of the world expect of you; this is what you must achieve. And for this, unanimous confidence in this institution must increase, its authority must increase; and this goal, one may hope, will be attained. You will win the gratitude of all peoples, relieved as they will then be from the crushing expense of armaments and freed from the nightmare of an ever-imminent war. We know and how could We fail to rejoice that many of you have looked with favor upon the invitation that, in the cause of peace, We addressed from Bombay last December to all States: to devote to the benefit of the developing countries at least a part of the savings which could be realized through the reduction of armaments. We here renew that invitation, trusting in your sentiments of humanity and generosity. In speaking of humanity and generosity,

We are echoing another fundamental principle of the United Nations, which is its very summit, namely, that you work here not only to avert conflicts between States, but also to make States capable of working for each other. You are not content with facilitating mere coexistence between nations; you take a much greater step forward, one deserving of Our praise and Our support: you organize brotherly cooperation among peoples. In this way a system of solidarity is established, so that lofty civilized aims may win the orderly and unanimous support of all the family of peoples for the common good and for the good of each individual. This is the finest aspect of the United Nations; it is its most truly human aspect; it is the ideal that mankind dreams of on its pilgrimage through time; it is the world's greatest hope; it is, We presume to say, the reflection of the loving and transcendent design of God for the progress of the human family on earth a reflection in which We see the heavenly message of the Gospel. Here indeed We seem to hear the echo of the voice of Our Predecessors, and particularly of Pope John XXIII, whose message of "Pacem in Terris" received so honorable and significant a response among you. You proclaim here the fundamental rights and duties of man, his dignity, his freedom and above all his religious freedom. We feel that you thus interpret the highest sphere of human wisdom and, We would almost say, its sacred character. For you deal here above all with human life, and human life is sacred; no one may dare make an attempt upon it. Respect for life, even with regard to the great problem of the birth rate, must find here in your Assembly its highest affirmation and its most rational defense. Your task is to ensure that there is enough bread on the tables of mankind, and not to encourage an artificial control of births, which would be irrational, in order to diminish the number of guests at the banquet of life. It is not enough, however, to feed the hungry; it is necessary also to assure to each man a life that befits his dignity. This, too, you strive to achieve. Is this not the fulfillment before Our very eyes, and through your efforts, of that prophetic utterances applicable to your Institution: "They shall beat their swords into ploughshares and their spears into pruning hooks" (Is. 2:4).

Are you not using the prodigious energies of the earth and the magnificent inventions of science, no longer as instruments of death, but as tools of life for the new era of humanity? We know with what increasing intensity and effectiveness the United Nations and its related world agencies are working to assist governments, which need help to hasten their economic and social progress. We know how ardently you labor to overcome illiteracy and to promote culture throughout the world; to give men adequate and modern medical assistance; to employ in man's service the marvelous resources of science, technology and organization. All this is magnificent and merits everyone's praise and support, including Our own. We, too, would set an example, even though the smallness of Our means may hinder an awareness of its practical implication: We intend to give Our charitable institutions a new development in order to combat the hunger of the world and to meet its principle needs. It is thus, and in no other way, that peace can be built. One more word, Gentlemen, one last word: this edifice which you are constructing does not rest upon merely material and earthly foundations, for if so, it would be a house built upon sand; it rests above all on our own consciences. The hour has indeed struck for "conversion," for personal transformation, for interior renewal. We must get used to thinking of man in a new way; and of men's life in common in a new way; in a new way, too, of the paths of history and the destiny of the world, in accordance with the words of Saint Paul, to "put on the new man, which has been created according to God in justice and holiness of truth" (Eph. 4:23).