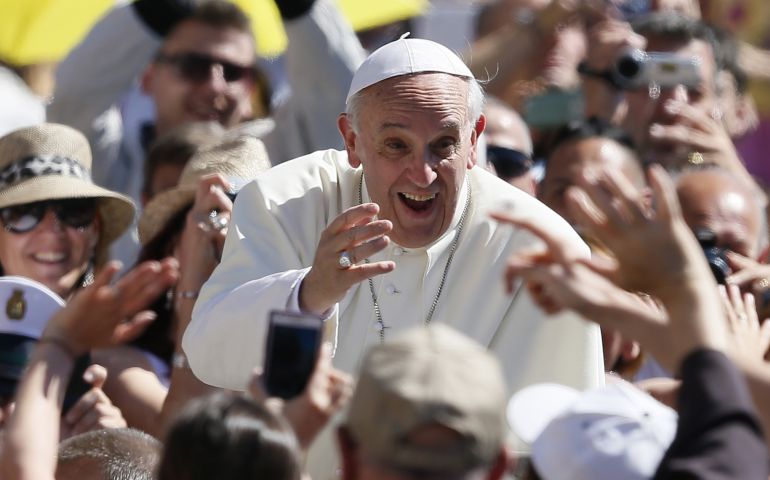 Pope Francis greets pilgrims as he arrives for his weekly general audience in St. Peter's Square at the Vatican June 12. (CNS photo/Paul Haring)
This article appears in the Pope Francis feature series. View the full series.

How inclusive is the Catholic church?

The exclusvists say God chooses among people, and some exclude themselves from God. They say redemption by Jesus is found exclusively within the Catholic church. These exclusivists worry that following the inclusivists' path takes one into treacherous relativism. Why need the Catholic church, they ask, if all paths lead to God?

At the heart of the issue is the very role of the church in history. Is it by nature an inclusive organization -- meaning, in an imperfect way, it attempts to reflect God's inclusive call? Or is it an entirely unique instrument for salvation? Some might argue that church, properly understood, is mystery, and the either/or choice might better be viewed as a both/and option. Hardliners disagree.

On a spectrum of inclusive to exclusive, Pope Benedict XVI lined up with the exclusivists.

Last month, he rocked some conservative Catholics, declaring in highly inclusive terminology that everyone is redeemed through Jesus.

"The Lord has redeemed all of us, all of us, with the blood of Christ: all of us, not just Catholics. Everyone."

Even atheists? He was asked.

Again on Wednesday, we heard Pope Francis, speaking in Rome, using richly inclusive language in references he made to the church. He used a phrase coming straight out of documents from the Second Vatican Council describing the church as "the People of God." This was the council's primary definition of church, but the phrase lost some of its luster in recent decades under the papacies of Popes John Paul II and Benedict.

According to a Vatican summary of Francis' remarks, he explained the concept of the People of God by answering a series of questions: "What does it mean to be the People of God? How does one become a member of this people? What is its law, its mission, and its goal?"

To be the People of God, he said, "first of all means that God doesn't belong to any particular people because He is the one who calls us ... and this invitation is addressed to all, without distinction, because God's mercy 'wills everyone to be saved.' "

Such a statement makes one wonder if some of the word changes forced by Rome two years ago on English-speaking Catholics might once again return to more inclusive translations.

Jesus, Francis went on, doesn't tell the Apostles and us to form an exclusive group of elite members. Jesus says, " 'Go and make disciples of all nations.' ... I would also like to say to whoever feels far from God and from the church, to whoever is timorous or indifferent, to whoever thinks they are no longer able to change: the Lord also calls you to be part of his people and He does so with great respect and love."

A person becomes part of this people "not through physical birth, but by a new birth ... Baptism ... through faith in Christ, God's gift that must be nourished and made to grow throughout our lives."

What is the law or mission of the people of God?

Francis answered: "It is the law of love, love for God and love for neighbor ... which isn't a sterile sentimentalism or something vague, but is the recognition of God as the one Lord of life and, at the same time, welcoming others as true brothers and sisters ... the two go hand in hand.

"Being the church, being the people of God," Francis concluded, "... means being God's leaven in this our humanity. It means proclaiming and bearing God's salvation in this our world, which is often lost and needful of having encouraging answers, answers that give hope, that give new energy along the journey.

May the church be the place of God's mercy and love where everyone can feel themselves welcomed, loved, forgiven and encouraged to live according to the good life of the Gospel. And in order to make others feel welcomed, loved, forgiven and encouraged, the church must have open doors so that all might enter. And we must go out of those doors and proclaim the Gospel."

Looking for a Good Friday vigil?