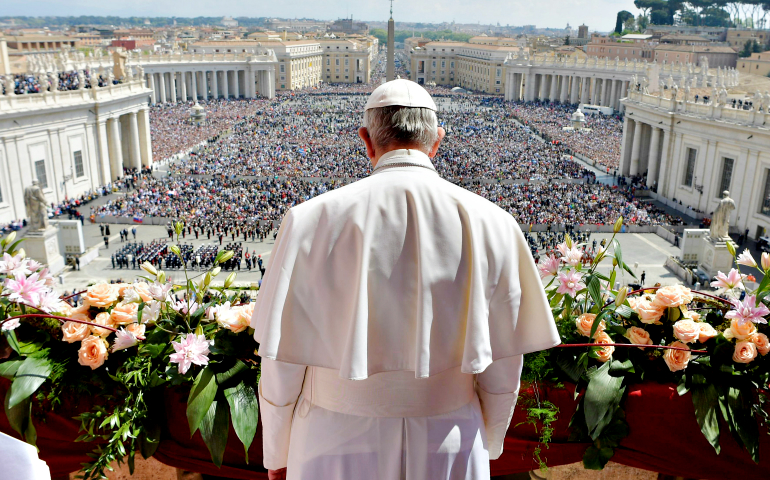 Pope Francis delivers his Easter message and blessing "urbi et orbi" (to the city and the world) from the central balcony of St. Peter's Basilica at the Vatican April 16. (CNS/L'Osservatore Romano)

A parish priest in the Italian town of Montesilvano has criticized Pope Francis during Mass. Fr. Edward Pushparaj from India said that Francis has been only bad for the church, referring to Francis washing the feet of a Muslim woman during his 2013 Holy Thursday liturgy. Many angry parishioners walked out of the small church in Montesilvano.

It seems that criticism of Francis is increasing and becoming more overt and intense. What is it about Francis that is making him a more and more controversial figure? One reason, of course is that he has created a more open papacy in which dissent is tolerated and even encouraged. The opportunity to share one’s thoughts, however, should not include being disrespectful.

It is also fair to say that there is a growing sentiment in the United States and parts of Europe that stands in opposition to many of this pope's priorities. Francis stresses mercy and compassion. He expects us to exercise a sense of caring for the thousands upon thousands of refugees, including women and children, who are desperate to find some place for their families to live without fear of violence.

On one level, Francis’ message seems quintessentially Christian. How can any Christian disagree with a message of love that reaches out to help others? Caring for the poor is at the heart of the Francis Gospel. Bible stories of the good Samaritan, the prodigal son, and the woman caught in adultery exemplify the Christianity espoused by Francis. People are more important than rules. Salvation comes from how we treat other people rather than strict adherence to a codified set of proscriptions.

Yet, it seems that too many people are concerned only about their own personal needs. Little interest is paid to the needs of others. Laws are made to enhance the wealth of those who are already wealthy and deny benefits to those in need. No one wants to hear the cry of the poor. Who will advocate for their needs?

Fear of those who look different or hold different religious beliefs is fostered with little or no attention to the relevant facts. Immigrants seeking a better life for their families are being returned to their country of origin, regardless of what dangers they may face there. The fact they may have lived almost their entire lives in this country means nothing. Foreigners who we think may be dangerous because of their religion are denied entrance. Refugees are left to linger in inhospitable camps with no hope in sight.

Francis becomes the voice of one crying in the wilderness. We need to join our voices to his, and to those of the parishioners who walked out of that small church in Italy. We need to remind those who have forgotten that we are all neighbors, and whatever we do for the least of our brothers and sisters we do for the Lord.