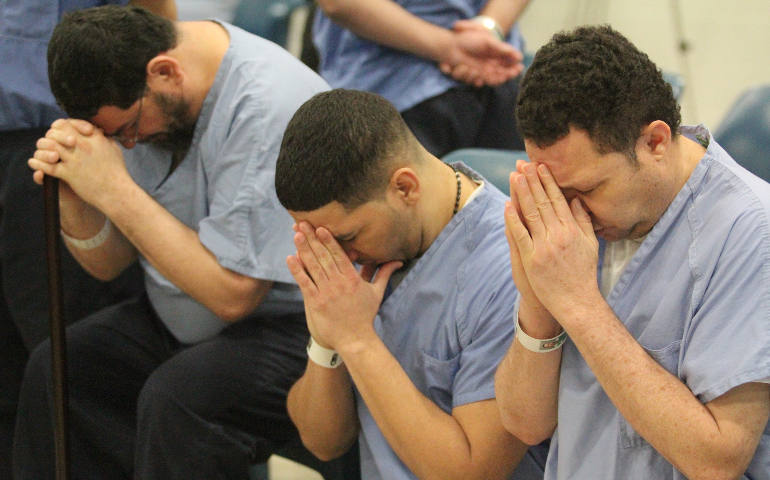 Prison inmates at Curran-Fromhold Correctional Facility in Philadelphia pray during a Mass in mid-January. The prison, which Pope Francis plans to visit Sept. 27 during his two-day visit to the city, currently houses Msgr. William Lynn, a church official convicted of endangering children for his handling of claims of clergy sexual abuse of minors. (CNS photo/Sarah Webb, CatholicPhilly.com)

Part of Pope Francis' U.S. itinerary will take him to Curran-Fromhold Correctional Facility in northeast Philadelphia along the Delaware River. One of the current occupants of the prison is Msgr. William Lynn.

Lynn, 64, served as secretary of clergy for the Philadelphia archdiocese from 1992 to 2004 under Cardinal Anthony Bevilacqua. In June 2012, he became the first U.S. church official convicted for the mishandling of claims of sexual abuse of minors by clergy. A jury found him guilty on one count of endangering the welfare of a child and acquitted him on a second endangerment charge and on one count of conspiracy. Lynn was sentenced to three to six years in prison.

The pope is set to visit the prison Sept. 27, the final day of his six-day trip to the United States, Francis' first time in the country. After visiting the prison, he is set to celebrate Mass for the conclusion of the World Meeting of Families.

Lynn's attorney, Thomas Bergstrom, told the Philadelphia Inquirer that he visited Lynn Wednesday and the priest was aware of the pope's pending visit. He said the two did not discuss whether Lynn might be part of the group who meets with Francis.

"What will be will be," Bergstrom told the Inquirer.

The Philadelphia newspaper also reported that it has not been determined which inmates or how many will be a part of the audience meeting with the pope.

The trial that led to Lynn's conviction emerged from two grand jury reports, in 2005 and 2011, that detailed alleged mishandling of abuse allegations. In the months that followed his 2012 conviction, Lynn's legal team appealed his case largely on the grounds that the key witness in the three-month trial, "Billy Doe," was not credible.

After serving 18 months at Waymart State Correctional Institution, Lynn was released in January 2014 following a post-Christmas decision from the state Superior Court that reversed his conviction, finding the child endangerment law, as written during his tenure as secretary of clergy, did not apply to supervisors.

Lynn was required to wear an electronic monitoring device and placed under house arrest while the state Supreme Court reviewed his case. The archdiocese also placed him on administrative leave without the ability to function as a priest.

But in May, Lynn returned to jail after the Pennsylvania Supreme Court reversed the lower court decision on April 27 and remanded him to the Curran-Fromhold Correctional Facility.

Lynn's case remains under appeal at the state's high court. An appellate brief is set to be filed Monday.